I am sort of breaking my own protocol here by posting about Gale crater before I hear the presentations today, but since we will immediately go into discussion and decision making after it is presented this morning, I figured that it would be good to familiarize you with it now. 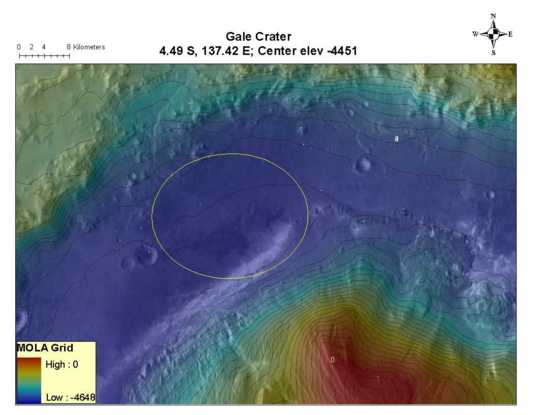 Gale is a ~100 km diameter crater on Mars with a huge 5 km tall mound of sediments in the middle that is taller than parts of the rim! The fact that this mound is so high implies that the crater is likely very old and has been completely buried and then re-exhumed by erosion. There are a lot of other craters on Mars with central mounds, and other craters that are still buried (we can detect them with other means), indicating that this sort of thing is quite common and that Gale could say something about a common process across the planet.

The landing site would be on a fan of debris from a channel flowing down from the crater wall. These channels are common on the rim and central mound, and indicate that Gale was probably a closed watershed, and may indicate that it was a lake.

The central mound is the real interest for this mission though. It shows layers of clays and sulfates on top of one another, both of which are good at preserving life in some conditions. There is also an erosional unconformity (a.k.a. a gap in time in the layers) that indicates that at some point, whatever was depositing stuff in the crater stopped for a while and erosion took over. Then more stuff started piling on again to form the top of the mound, which we know has been eroded back down. All of this indicates an interesting story and a lot of information about early Mars. 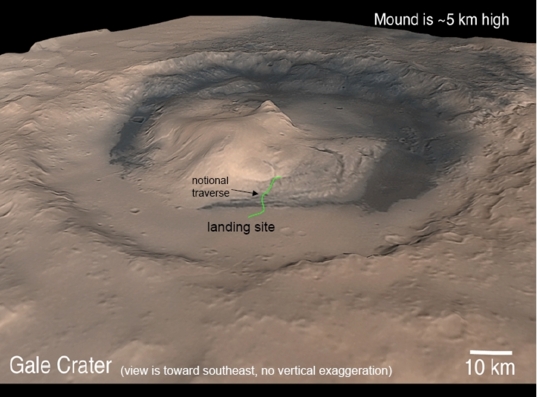 One of the criticisms that I think will be leveled at Gale is that the whole mound could be wind-deposited. One response to this anticipated criticism that I have heard is that "if there was never a lake in Gale crater, there was never a lake anywhere on Mars". I don't know how true that is, but we also heard that just because things were transported doen't mean they don't hold a lot of information.

Personally, I think Gale is a pretty good site, but to be fair, I haven't witnessed it go through the post presentation beating that the other sites have taken, so my mind may change. I also think that some people who have a lot of influence on the later steps of this process like Gale. In any case, the 5 km stack of sediment would give the rover plenty to do for several extended missions. And think of the view from high up on that stack!