Last time, I gave some of the background information about my research. Now, armed with that knowledge, we can press forward and talk about what I do.

I look for hydrated minerals. A hydrated mineral is a mineral with water trapped in its crystal structure. The crystal acts as a protective cage, keeping the water bound within it even when the atmospheric pressure is too low for liquid water to be stable on the surface. There are three main types of hydrated minerals that have been detected on Mars. These are clays, sulfates and oxides.

Clays are also known as phyllosilicates or sheet silicates. This is because their crystal form as flat sheets of molecules. When it comes to looking for evidence of past habitability on Mars, phyllosilicates are ideal. Their sheet-like crystals can trap organic molecules between them like flowers pressed and preserved between the pages of a book. Even better, clays form through the interaction of neutral pH water with volcanic rocks, implying that there was a life-friendly environment for an extended period of time. Many Mars scientists believe that clay minerals are found in the earliest rocks on Mars, and record a time when the planet was warmer, wetter, and more habitable.

Sulfates are formed when acidic volcanic water and vapor interacts with rocks, or when large bodies of water evaporate. They can preserve some evidence of organics, but are not as good as clays. It is harder, though by no means impossible, for life to live in acidic waters. Sulfates may represent an era of martian history when the world's water was drying up and volcanoes were changing the climate.

Finally, oxides are the result of slow weathering of volcanic rocks under current martian conditions: very cold and very dry. Mars is red because it is covered in iron oxides (a.k.a. rust). It doesn't take much water at all to form them, and it is likely that, for most of the history of the planet, oxides have been the dominant mineral formed when the surface rocks are weathered.

To make my maps of these different minerals, I use data from the OMEGA instrument on Mars Express. OMEGA is an infrared mapping spectrometer, which means that it takes pictures of the planet at hundreds of different wavelengths of visible and infrared light simultaneously. This means that for a given location on the surface, we get information about how bright it is at hundreds of different wavelengths. In other words, every pixel of an image taken by OMEGA contains a spectrum. It is that spectrum that I use to figure out which minerals are present on the surface.

Every mineral has its own unique spectrum, so I use a computer to map which pixels in the image have spectra that fit with clays, sulfates, or hydrated minerals in general. First, an example of the sort of images that OMEGA takes: 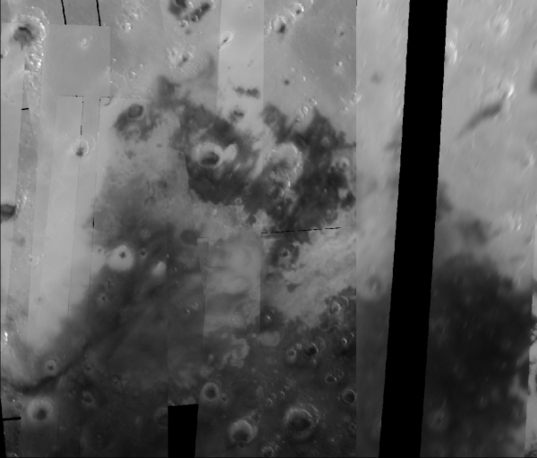 This is actually a whole bunch of OMEGA images, stitched together into a mosaic. It's not perfect, but it allows me to map a larger region than that covered by just one image. For example: 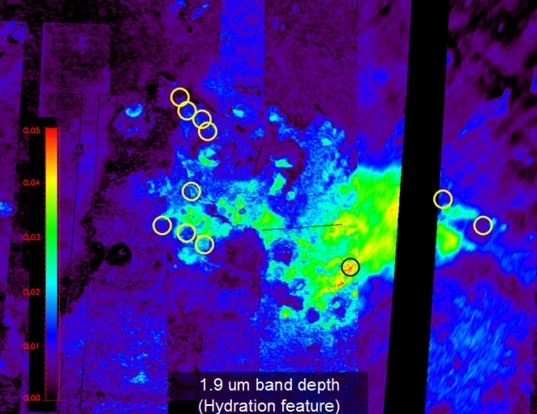 This is a map of the amount of hydration in Meridiani. The yellow (and one black) circles show places that were being considered as possible landing sites for MSL. Each circle is about 32 km in diameter. Most of these were thrown out at or before the landing site selection meeting in October of 2007, but the center circle in the three-in-a-row diagonal on the left is being considered because it is a very flat, safe site. The black circle is also being kept as a back-up, though I thought it should be one of the top priority sites because it is pretty safe and is right smack on top of loads of hydration! As you will see below, there also may be sulfates and clays in or near the black-circle site.

Clay mapping is a little more complicated, because you have to look for hydration, plus another signature in the spectrum. Here is a map showing hydration in blue, and little, barely visible specks of green and pink where clays are present.

And here is a map of the sulfates in Meridiani:

Ok, so I have shown off my pretty pictures. But what do they mean? Well, one thing to notice is that the hydration map shows that there are hydrated minerals over a wide region of Meridiani, but clays and sulfates are not so widespread. The clays are only found in tiny little outcrops, and the sulfates are mostly focused in one location, with a rather weak signature elsewhere. This implies that a lot of the hydration that we are seeing in Meridiani is due to something other than clays or sulfates. By looking at the spectrum, we can tell that it is probably some sort of iron oxide.

Also, take a look at this topographic map of the Meridiani region. Black and purple are low elevation, and red is high. 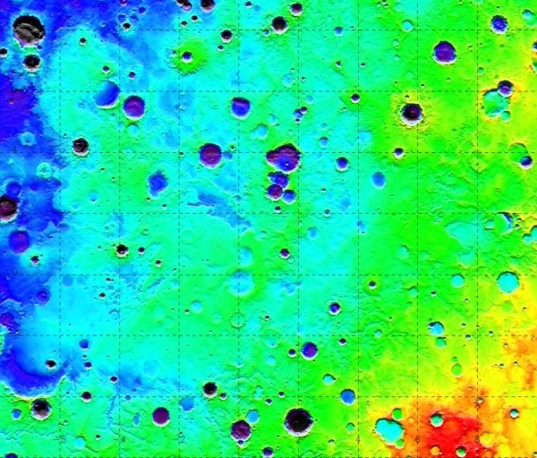 Topographic map of the Meridiani region

It is interesting to note that the place where the sulfates are concentrated is in a low valley. It shows up near the center of the picture in blue, with a sort of blue "finger" sticking off to the west, and is surrounded by higher terrain in green. Could this have been a lake long ago that dried up, leaving behind sulfate-rich salts? Maybe. Or maybe erosion has exposed sulfates that were created by hydrothermal activity in the area. Who knows? I don't...yet.

I will leave with a final observation, which is what I am working on right now. The sulfates are in a valley, and the meager detections of clay minerals are in the surrounding, higher terrain. If we really are to believe that clays formed early in Martian history and sulfates formed later, it is strange to find sulfates below clays. Did something happen at Meridiani to make it an exception to an otherwise globally-obeyed rule? Or is the prediction that clays come first, followed by sulfates, and finally iron oxides a little too simple to explain what happened on Mars? I don't know yet...but I'm hoping to find out.