The mantra of Mars exploration is "follow the water," and my research is no exception. Lately, I have been looking closely at the the Meridiani region on Mars, searching for evidence of water-formed minerals near some of the potential landing sites for the upcoming Mars Science Laboratory (MSL) mission. MSL's primary goal is to figure out whether Mars is, or ever has been, a habitable planet, so you can bet evidence for liquid water is pretty high on the list of requirements for a landing site.

Meridiani is a particularly interesting region because from orbit we can see that there are huge areas where layered rocks are exposed on the surface. Geologists love layers. To a geologist, layers of rock are like the pages of a history book, filled with information about the distant past. Layers are often associated with water: dust and sand get deposited in lakes and oceans and eventually are buried and become sedimentary rocks. 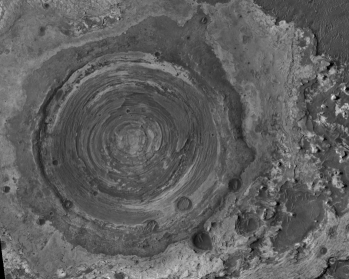 This MRO image shows an example of a crater in Meridiani with lots of layers.

There's more than just pretty layers at Meridiani though. Early on in the Mars Global Surveyor (MGS) mission, the Thermal Emission Spectrometer (TES) found evidence of a hematite in portions of Meridiani. Hematite is an iron oxide (a.k.a. rust) that often forms in water on Earth. The hematite signature was so intriguing, that one of the Mars Exploration Rovers (MER), Opportunity was sent there in 2003. Opportunity has since found loads of evidence for liquid water at Meridiani, including the source of the hematite: small bb-sized spherules of hematite crystals that formed as water seeped through the sedimentary rocks. 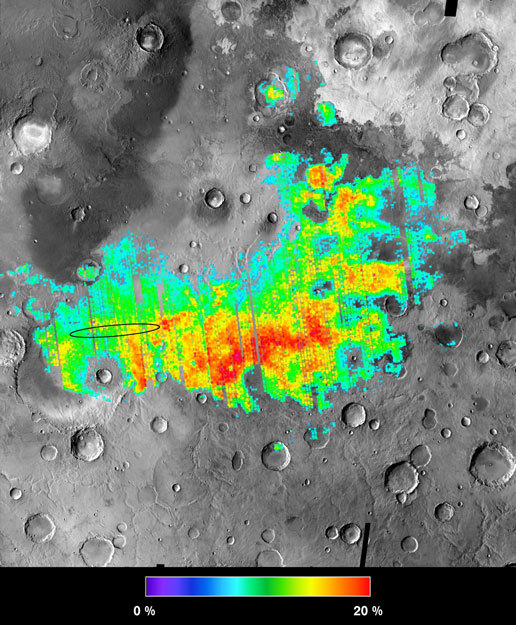 TES map of hematite in Meridiani

The Opportunity landing site is indicated by a black ellipse. 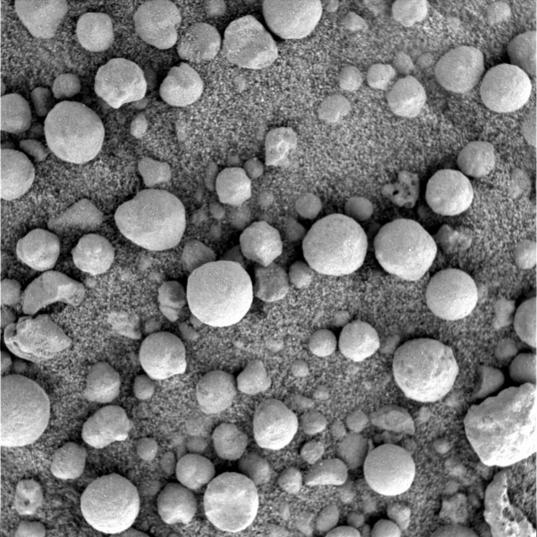 Microscopic image of the hematite "blueberries" as seen by the Opportunity rover.

You may wonder, if there is already a rover roving around Meridiani, what's the point in sending another one? I have a couple of answers for you. The first is that Meridiani is a big place, roughly the size of the Colorado Plateau on Earth. In case you aren't familiar with it, the Colorado plateau covers about 337,000 km_ of the southwest united states, including a large portion of Colorado, Utah, Arizona, and New Mexico. My point is, Meridiani is a big place. Opportunity has "only" traveled about 11.5 km. To say that we should not return to Meridiani because we already have one rover there is like saying that if you've done a day hike in Utah, there's no point in visiting anywhere in the southwest again.

Another good reason to send a rover back to Meridiani is precisely that we already know a lot about part of the region. By putting together information from two rovers in different parts of the same geologic region, we would be able to get a much better idea of what happened there in the past than would be possible from just one rover.

The best reason to go back to Meridiani, in my opinion, is the evidence that we have for water-formed minerals there. And that's where my research comes in, but this post is long enough. Stay tuned for part 2.