An Auspicious Week for Astronomy

It is reassuring and exhilarating to see that in the midst of all that ails us as a civilization, we still have the will and the strength to reach for the stars. This week we'll do it twice.

On Monday, if all goes well, we will launch the Space Shuttle to rejuvenate one the greatest scientific missions launched on or off the Earth: the Hubble Space Telescope. In addition to the incredible scientific bounty that Hubble has returned, it has made the universe our home by showing us in pictures the beauty and wonder of things we had never imagined. I hope that by now, no child can go through school without the Pillars of Creation showing up in their science textbooks. The new visible camera and UV spectrograph that the astronauts will install and the coming years of operation will fill many more textbooks. 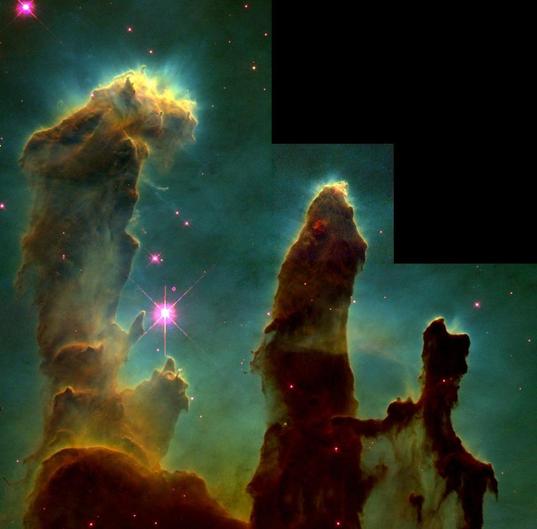 These dark pillar-like structures are columns of cool interstellar hydrogen gas and dust that are also incubators for new stars. The pillars protrude from the interior wall of a dark molecular cloud like stalagmites from the floor of a cavern. They are part of the Eagle Nebula (also called M16), a nearby star-forming region 6,500 light-years away in the constellation Serpens. The Hubble Space Telescope captured these Pillars of Creation on April 1, 1995.

On Thursday, again if all goes well, two more space observatories, built by the European Space Agency, will be launched from French Guiana: Herschel and Planck.Herschel, with two key detectors from JPL, is a telescope that covers the far infrared down to the submillimeter, bridging those wavelengths with unprecedented sensitivity and resolution using a mirror one and a half times bigger than Hubble's. Herschel will look at a wide variety of objects in our solar system, our galaxy, and outside our galaxy for four years. Herschel will explore in detail the formation of stars and planets, and the nature of the vast dust clouds from which they form. Planck is a microwave observatory which will follow in the footsteps of NASA's COBE and WMAP missions to understand the Big Bang by looking at the intricate details of the cosmic microwave background radiation that was left behind. Planck also has JPL detectors. Planck will take it to the next level with three times the resolution of WMAP, and detectors that can measure tiny variations of a few millionths of degree in the afterglow of the Big Bang. Soon we will be reading the oldest history book there is.

Herschel and Planck will be going up together on an Ariane 5 launch vehicle. That rocket had darned well better work -- there are two precious eggs in that basket.

Also this week or maybe next, the Spitzer Space Telescope will run out of liquid helium, ending one life and beginning another. Spitzer is one the original four great space observatories, along with Hubble. Spitzer's resume of scientific discoveries has been similarly spectacular.

If anyone wonders why we're here, this I think must be part of the answer. So that we can truly appreciate the marvel of the universe, in a way that only intelligent, mathematics-wielding beings can. It's amazing that we apes that just fell out of the trees can even do this. I feel very fortunate to have been alive at the time we began to open our eyes.

The Pillars of Creation are incredible. Such a fun topic to talk about. Check out this article! http://luxperci.com/the-cosmic-wonder-that-disappeared/