In the weeks since my last update, InSight has methodically worked through most of the long list of activities required to set up its sensitive seismometer experiment, SEIS. Engineers have leveled the seismometer and worked on cable management. Most significantly for the science mission, they have balanced the Very Broad Band sensors -- 3 of SEIS’ 6 seismic sensors -- and confirmed that they are generating good data. This is a huge milestone and a huge relief for the science team, project scientist Bruce Banerdt told me.

(Thanks to Bruce for an informative phone call yesterday, and to the seismometer team for posting this detailed and informative article about recent work on SEIS placement.)

Over the next couple of weeks, they will complete cable management work and place the wind and thermal shield over the instrument. The mission is still on track to be gathering good-quality science data by February. In the meantime, the science team is already writing up results; they are submitting more than 50 abstracts to the Lunar and Planetary Science Conference, to be held in March. (Most of these will concern environment and weather measurements, but some will be placeholders for future seismometer results.)

Animation of two images collected on sols 38 and 41.

Here’s a play-by-play of the recent InSight activity, since they placed the SEIS instrument on the ground on sol 22.

On sol 25, the grapple let go of SEIS, leaving it all by itself on the surface. “It was something we’ve been dreaming about. It actually looked kinda lonely out there all by itself,” Bruce told me. “I’m looking forward to getting HP3 [the heat probe instrument] out there and making Mars look a little more populated.”

But that’s getting ahead of ourselves. There’s a surprising amount of work involved in placing an exquisitely sensitive seismometer on another planet. The first step after placement was to level the instrument, which the SEIS team did on sol 30, canceling out the slight, 2.5-degree slope of the workspace.

InSight's SEIS instrument has three legs that can be independently lengthened and shortened to level it out. The ground slopes slightly, so on sol 30 (27 December 2018) the instrument was successfully commanded to compensate for the ground tilt.

With the instrument level, they could “recenter the VBBs.” What’s that, and why is it important? “VBB” stands for “Very Broad Band” sensors in the seismometer. The seismometer has 3 VBB sensors in addition to the 3 short-period sensors. The VBBs are pendulums mounted on pivots that are as nearly frictionless as possible. When the ground moves, it sets the pendulums in motion as well. But the motions they’re seeking to detect are incredibly small, so small that to have any hope of detection, the VBBs have to operate in a vacuum and perfectly level.

The VBBs were the biggest headache for the InSight development effort. The failure of the vacuum chamber development is what led to InSight’s costly launch delay, but the VBBs were tricky bits of hardware even before that problem. “It was a hard road to get to where we had those wideband sensors to the point where they were working, and we could trust them,” Bruce said. I always had this worry in the back of my mind that we would get to Mars and they wouldn’t work.”

To make them work on Mars, the team has to command the VBBs to center their pendulums, allowing them to swing freely with ground motion.

Animation showing the "recentering" operation of the InSight seismometer's Very Broad Band (VBB) seismic pendulums. Recentering is a calibration activity that fine-tunes the instrument's sensitivity to slow seismic waves. There are three VBB sensors in the SEIS instrument.

The command executed on 31 December (sol 34), but the team didn’t receive the resulting data until early in the morning of 2 January, Bruce told me. “We finally got vibrational data back from all 3 of the VBBs. To see that data coming back, and analysis showed it was performing just like we expected and hoped, that’s when I went home and decided to celebrate.” The SEIS team said:

With some help from Google translate:

On New Year's Day, in the course of sol 35, the balancing motor of the three VBB pendulums was activated on Mars, to place the moving part of the sensor in its central equilibrium position. The arrival of the first data on the next sol (sol 36, 2 January 2019) at 8:21 was greeted by bursts of applause, the team having gathered for the occasion in front of the main screen of the SEIS operating room at the Jet Propulsion Laboratory.

Having confirmed that the sensors are operating properly, the team decentered them, parking them for the next steps in setting up the experiment. SEIS is connected to the spacecraft with a ribbonlike tether. With Mars’ widely varying temperatures, that tether can move a lot overnight:

Temperatures on Mars vary widely between day and night, causing spacecraft materials to expand and contract slightly. As a result, the InSight SEIS tether moved overnight between sols 37 and 38. These two photos were taken in the afternoon, near the hottest part of the day (at 13:24 and 14:09 local time, respectively). The load shunt assembly located close to the SEIS instrument is designed to isolate SEIS from this thermoelastic deformation of the tether.

Once the seismometer was placed in its final location on the ground, engineers commanded InSight to open up the storage box that held the rest of the tether, allowing the remaining length to fall to the ground. The tether will expand and contract with the temperature changes of every Martian day and night, so it's important that there be plenty of slack in the line to accommodate those changes.

So now the lander isn’t tugging on the tether at all. But still, thermal expansion and contraction of the tether can tug on SEIS. So the next step was to open up the load shunt assembly, an element on SEIS that I explained in my previous post. Opening the load shunt assembly involved firing a “frangibolt,” which is a bolt that provides a permanent attachment until you apply current to it, which causes it to break. As you can see at 2:10 in this demo video, opening a frangibolt is a good jolt to your hardware, and jolts are enemies of seismometers. "That was actually a concerning operation -- we'd tested it, but it's one of the sharpest blows the SEIS gets over its lifetime, so we were concerned watching it, but that went off without a hitch. We recentered the VBBs, and found they were working fine."

The animation below shows the before and after condition of the firing of the frangibolt on the load shunt assembly.

Animated sequence of images obtained by the InSight arm camera showing the opening of the Load Shunt Assembly (LSA) on the SEIS instrument on sol 40 (6 January 2019). The LSA provides mechanical separation between the tether and the seismometer to isolate the seismometer from disturbances caused by the lander as much as possible. 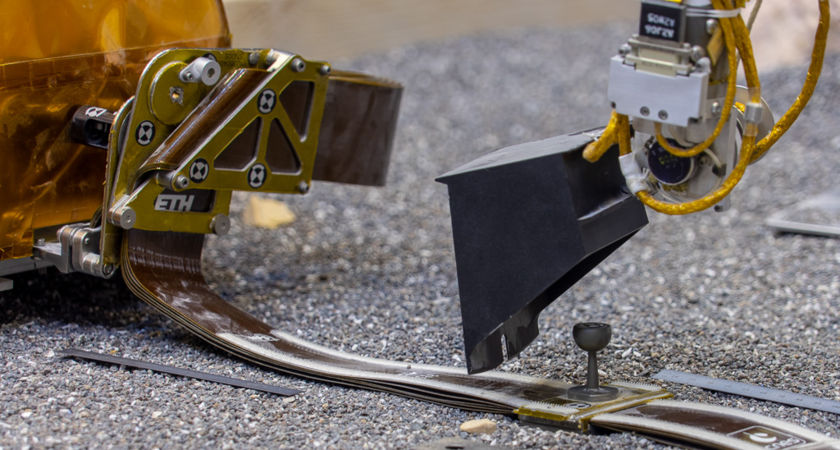 To make sure the InSight seismometer is completely mechanically isolated from any noise from the lander, the InSight team plans to tug slightly on the tether to pull open the cable bend at the load shunt assembly (at the left side of this photo). They plan to use the scoop on the end of the arm to pull on a grapple point on the tether's "pinning mass," a weighted block intended to prevent the tether from moving in the Martian wind. This photo shows the scoop poised over the pinning mass in the Earth-based testbed.

They have to be careful, because they want to open up the load shunt assembly enough for it to isolate SEIS from tether expansion and contraction, but not so much that it interferes with placement of the wind and thermal shield over the top of SEIS. The desirable amount of opening is between a few millimeters and a couple of centimeters, Bruce told me. Tugging on it is much easier than trying to shove it closed again. So they will just tug a little bit (possibly as early as Friday), and may need to run the operation one or two times more to have it placed just perfectly.

Once they've finished all this cable management, they will take a few sols to collect a set of seismic data without the wind and thermal shield, but only during the daytime, because the instrument will be too cold at night. Then, and only then, will they be able to place the shield over SEIS, and its setup will be complete. The way the timeline looked yesterday, that might happen around sol 54 (20 January), but it could be delayed for any number of reasons. Patience is a virtue with InSight!

In the meantime, enjoy my reaction to the design of the skirt on the wind and thermal shield.

The English translation has an extra sentence that the original French does not. All that French sentence is saying is how they celebrated.