This week Hayabusa2 completed its closest approach yet to asteroid Ryugu. In a gravity measurement experiment conducted mostly on August 6, the spacecraft successfully dipped to within 1 kilometer of the asteroid. As before, the mission live tweeted events and pictures in both Japanese and English on Twitter, and posted the images to a Web gallery, enabling me to post a detailed recap here.

54 images from Hayabusa2's first gravity measurement descent toward Ryugu, which brought it as low as 851 meters away from the surface of the asteroid. These images were taken with the wide-angle camera; the spacecraft also obtained much higher-resolution images from the telescopic camera.

The team spent 5 August (Japan time) preparing for the operation, and at 00:50 UTC on 6 August they received permission to proceed. At 02:00 the team confirmed that the spacecraft was descending from its home position altitude of 20 kilometers at a rate of 40 centimeters per second. Communications were passing through the Usuda ground station.

When the spacecraft reached an altitude of 6000 meters at 11:30, the team reduced the spacecraft's descent speed to 8.5 centimeters per second. Then they allowed the craft to free-fall and measured its acceleration, data that will permit the team to determine Ryugu's gravity. While still following the descent, the evening shift handed over control of the spacecraft to the late-night shift; communications had passed from Usuda to Madrid to Goldstone.

Another shift change to the daytime team at 22:00 (07:00 Japan time), and "The gravity measurement descent of Hayabusa2 has now entered the phase of close approach to Ryugu! Tension in the control room has increased."

With nearly a full rotation of Earth complete, communications responsibilities were passed from Goldstone back to Usuda. Our narrator, "IES兄" (the "big brother" of the Ion Engine Systems), recalled some poetry by Shuntaro Tanakawa: "We relay the morning from longitude to longitude, and so take turns, as it were, in protecting the [Earth] spacecraft."

On 6 August at about 23:10 UTC, the spacecraft reached its minimum altitude. Confirmation reached Earth on 6 August at 23:42. Having reached minimum altitude, Hayabusa2 had begun to rise again. The spacecraft initially rises at 20 centimeters per second. The project manager declared the gravity measurement operation successful. JAXA released two images taken with the telescopic camera just  before minimum distance, showing a surface covered with meter-scale boulders. 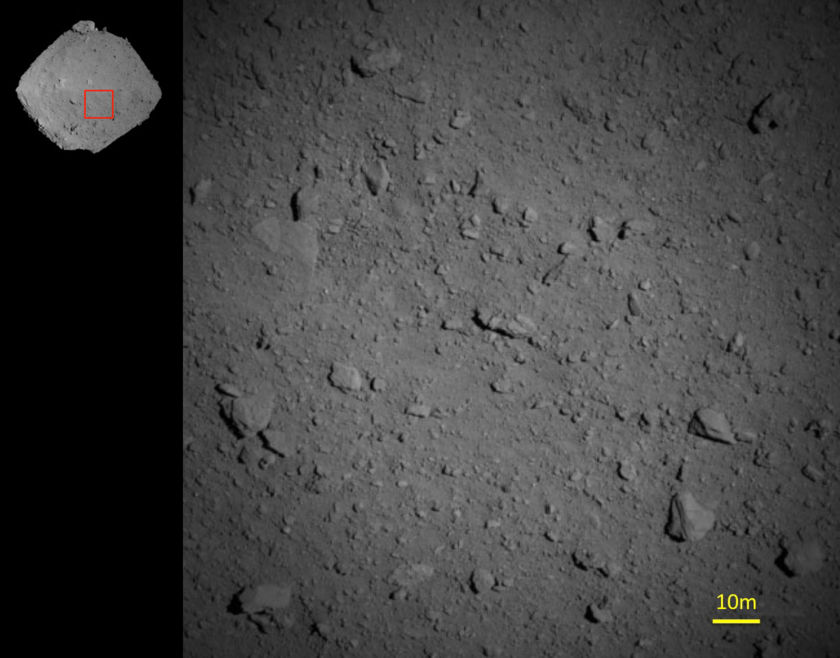 Surface of Ryugu photographed with the Optical Navigation Camera - Telescopic (ONC-T) from a height of about 1250 m. The image was captured on 6 August 2018 at around 22:37 UTC. Images of the entirety of Ryugu were taken at nearly the same time by the Optical Navigation Camera - Wide angle (ONC-W1, inset). The red frame corresponds to the region in the picture taken by the ONC-T. 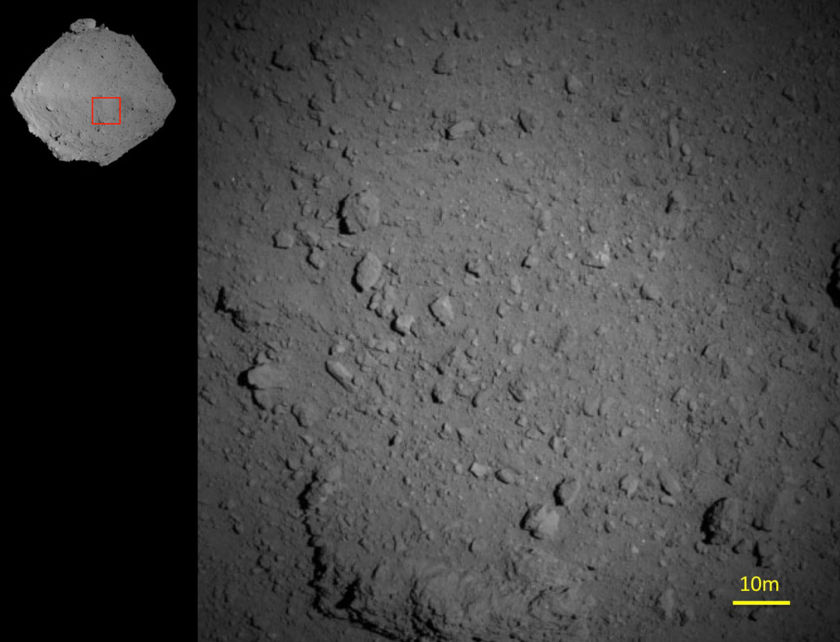 Surface of Ryugu photographed with the Optical Navigation Camera - Telescopic (ONC-T) from a height of about 1000 m. The image was captured on 6 August 2018 at around 22:57 UTC. Images of the entirety of Ryugu were taken at nearly the same time by the Optical Navigation Camera - Wide angle (ONC-W1, inset). The red frame corresponds to the region in the picture taken by the ONC-T.

The navigators reported a preliminary estimate of the minimum approach distance of 851 meters. Our narrator mused that this distance is shorter than the distance between the Hayabusa2 control center at ISAS and the nearest train station at Fuchinobe.

Hayabusa2 ascended in a coasting mode -- "free rise" as opposed to "free fall" -- which means its rate of ascent slowed over time. As of 03:30 on 7 August, it had achieved an altitude of 3000 meters and was ascending at 12 centimeters per second.

The team had initially planned to bring the gravity operation to an end at this time, increasing speed to return to the home position of 20 kilometers above the asteroid, but elected to let Hayabusa2 continue to coast for a little while longer because typhoon Shanshan was approaching Japan, and the team was concerned about losing communications with the spacecraft at the crucial time of its return to home position. They waited for the typhoon danger to pass and then commanded it on 7 August at 09:17 UTC. It should have arrived back at home today, 10 August.

These 16 images of Ryugu taken with the optical navigation camera cover a full rotation of the asteroid, which takes 7.6 hours. The images were taken during Hayabusa2's closest-yet approach to the asteroid on 6 August 2018 with its wide-angle camera.

I don't think the world has yet settled on what Ryugu looks like. Itokawa pretty early on became identified with a sea otter (though I thought it mostly looked like a Cheez Doodle). I thought you readers might enjoy this Twitter exchange between me and planetary scientist Angela Stickle.

Ryugu you have an adorable little boulder hat! https://t.co/83ci8H5TdL

I take it that it's an oddity of the ONC-T camera that the corners of the images are darker than the centre, not something about the illumination or the asteroid itself?

This is a nice article on the mission operations for this phase. Thanks! I like your artistic doodling! : )

I don't know anything about the ONC-T camera specifically, but as an amateur photographer I can confidently state that having the corners of an image be darker than the centre is virtually ubiquitous. It's called vignetting, and is present to greater or lesser degrees in any lens I've ever used. The amount of vignetting for a given camera+lens can be characterized and corrected for, but it looks like that hasn't been done in these images.

Hi Emily, great article as always. Any news on if/when you'll be publishing one of your excellent "What to Expect" blog post for the New Horizons flyby of Ultimata Thule?