JAXA has released its first photo of its eventual destination, asteroid Ryugu, taken on February 26. According to an announcement on the mission website, there were 300 images taken in total, of which nine were transmitted to Earth the next day.

First light on Ryugu for Hayabusa2!

This is a series of nine pictures taken with Hyabusa2's telescopic optical navigation camera (ONC-T) from about 12:00 to around 15:00 JST (03:00 to 06:00 UTC) on February 26, 2018, from a distance of about 1.3 million kilometers. Ryugu is visible as a bright dot near the center that moves slightly from left to right. Objects that can only be seen momentarily as they appear and disappear between frames are image noise. The phase angle of the photo is only 0.8 degrees -- Hayabusa2 was positioned between the Sun and the asteroid at the time.

It's not much, but it's always exciting to shout "land ho!" as you approach a new shore. There are two other shores that other spacecraft are approaching right now. OSIRIS-REx should first spot its target asteroid Bennu in August. It's possible that New Horizons will also first spot 2014 MU69 in August, but it is more likely to be September.

There's a specific reason that the Hayabusa2 images were taken now. The spacecraft needs to keep its solar panels oriented at the Sun for power generation, and mission controllers did not want to make major shifts to that orientation. The cameras are pointed exactly in the opposite direction. So the perfect time to try to image Ryugu would be if the spacecraft passed between the Sun and Ryugu, which it did on February 26. They found the asteroid precisely where they expected it to be, which is always good news! 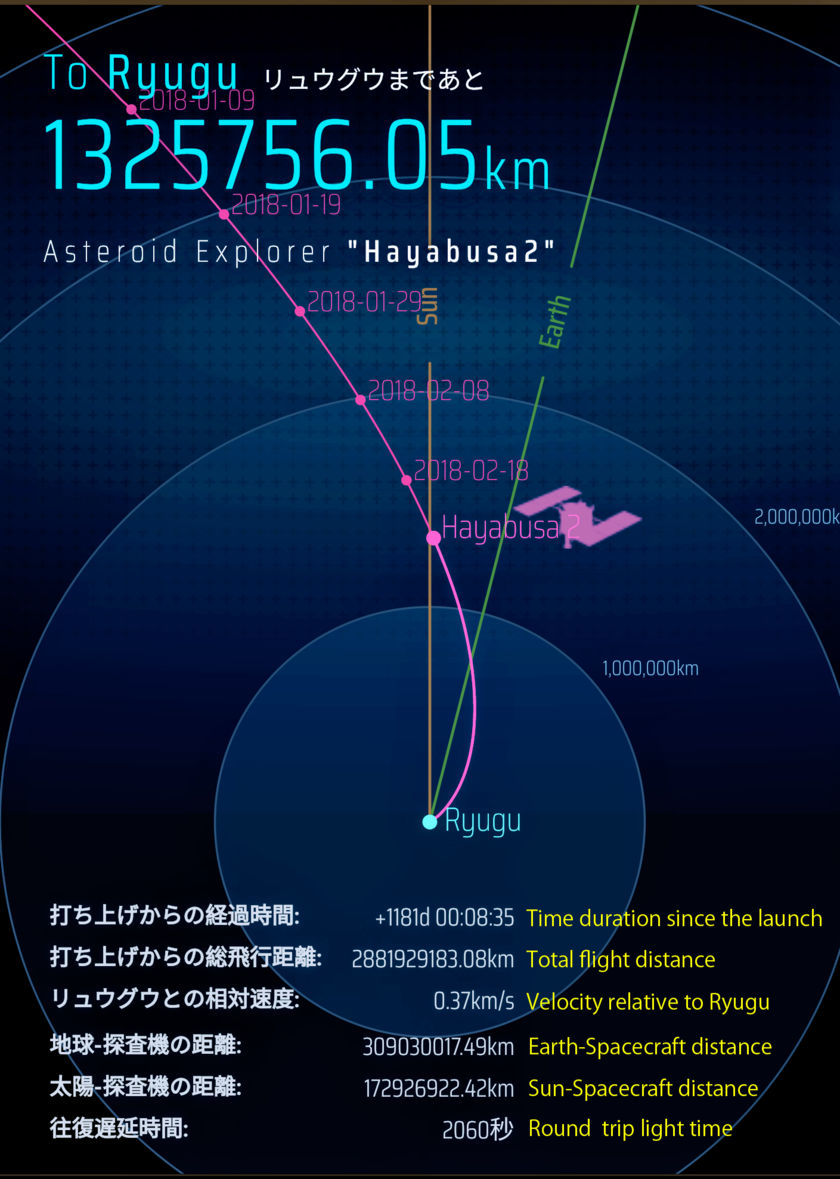 Hayabusa2's position at the time of the "first light" image

I want to take a moment to thank the Hayabusa2 team for issuing this announcement in English as well as Japanese on the same day, and express my hopes that that practice can continue! For past JAXA missions, English translations generally only arrived on the website about a week after original posts, which left Western media struggling with often-puzzling machine translation to understand the gist of the statements. Issuing the statements in English simultaneously with Japanese dramatically improves the accessibility of the Hayabusa2 mission communications to the English-speaking world. It also improves accessibility to other European languages,which can be translated from English with relative ease with online translation tools. (Now I am curious whether machine translation of Japanese to other Asian languages like Mandarin or Korean works better than machine translation to English!)

Are they still on target for a June orbital insertion?