Some big moons in the Kuiper belt

The Kuiper belt is full of weirdness. In the "inner" solar system -- by which, for the purposes of this post, I mean everything inside Neptune's orbit -- there are lots of round moons, but they're all quite a bit smaller than their primary planets. Relative to its primary, the biggest moon is our own Moon, which has a quarter the diameter of Earth and about one percent of Earth's mass. Out in the Kuiper belt, though, relatively large satellites are common; there are several round worlds that, despite being quite a bit smaller than our own Moon, have moons that are also big enough to be round. In a new preprint, Mike Brown and Bryan Butler show evidence that two of those moons are even bigger than we used to think.

For context, consider the Pluto system. Charon is huge relative to Pluto -- half of Pluto's diameter, and one eighth of Pluto's mass. They're similar enough in size that the two clearly mutually orbit a point that is located outside either of them:

The new paper concerns moons of two other large worlds: Eris and Orcus. Eris is similar in size to Pluto; Orcus is smaller than Charon but still somewhere around the eighth biggest object that we know of in the Kuiper belt. Each has a moon: Eris has Dysnomia, while Orcus has Vanth. Brown and Butler used the ALMA interferometric radio telescope array to resolve the moons as separate objects from the primaries and measure their diameters from the thermal energy their cold surfaces radiate at millimeter wavelengths. Here's a summary of the results, compared to Pluto/Charon.

The new number for Vanth is larger than previously estimated, and the new number for Dysnomia is much larger. Dysnomia's reported diameter is really very big, big enough to make it somewhere around 20th-largest known object in the Kuiper belt.

Let's put all these together on a graphic comparing their relative sizes. Like I often do, I'm using moons of Saturn, Uranus, and Neptune to stand in for Eris, Dysnomia, Orcus, and Vanth, for which we have no resolved photographs. I've taken worlds that we've visited and resized them proportionately, and I've also adjusted the contrast in the images to try to give a sense of the relative brightnesses. The brightness comparison is not precise -- it's just meant to give a feel for the differences among these worlds. That's hard to do well, though, because Dysnomia is (according to the Brown and Butler study) bizarrely darker-than-coal black next to Eris' whiter-than-snow brightness. 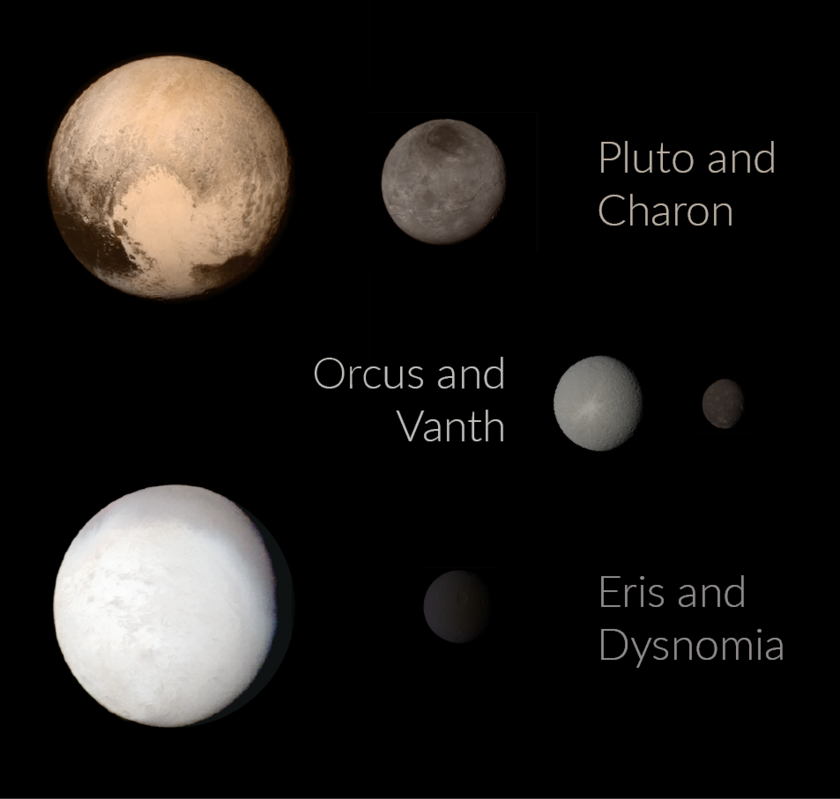 Size comparisons of some binary TNOs

In this scale comparison, Tethys and Titania are used as stand-ins for Orcus and Vanth, and Triton and Rhea stand in for Eris and Dysnomia, respectively.

As for Orcus and Vanth, they're pretty ordinary-looking for Kuiper belt worlds of their sizes. What's especially fun about that pair is that if you scaled up the Orcus system so that Orcus matched the size of Pluto, then Vanth would pretty closely match the size of Charon, and the separation between the two would scale properly, too. Orcus and Vanth presents a pint-sized version of the Pluto-Charon system.

I think it would be interesting to a few (or maybe many) readers if human missions to these distant bodies were considered in a TPS article. I would suggest using some optimistic numbers from Project Orion or Solem's Medusa concept (both use nuclear bomb propulsion). With several thousand "pulse units" (not so crazy when there is certainly plenty of bomb grade material sitting in storage around the world) these nuclear pulse propelled spaceships might take several years to get out there but they promise truly spectacular performance so are such missions a possibility? I would say yes if we have a cislunar infrastructure to work with within a decade or two. The Moon is the best place to acquire cosmic ray water shielding from lunar ice, assemble, test, and launch such spaceships. LEO is the worst place to do it of course. I would guess a mission of around 5 years would be the maximum due to psychological limitations. Just a guess. Eris is about 3 times farther out than Pluto so spending a couple years getting there and a couple getting back and one year exploring a possible ocean with mini-subs might be the scenario. How fast would the spaceship need to be?

Hi Emily: Thanks for your enlightening articles. Is there any way we can estimate the mass of Dysnomia? I figure there are at least 2 different approaches. Wobble of Eris around its barycenter. Estimating via an assumed density or range of densities. The third is not yet there. Discovery of a second smaller satellite

Emily I appreciated the mention (and graphic) of Pluto and Charon orbiting a barycenter between each other. (I always refer to Pluto/Charon as a double-dwarf planet.) So I was expecting to hear a mention about whether or not the barycenter of Eris and Dysnomia was or was not within Eris. I would also be interested in the same info about Orcus and Vanth, though you may have answered that by calling them a pint-sized version of the Pluto-Charon system. Thanks.