Book Update: The Design and Engineering of Curiosity

The Design and Engineering of Curiosity:
How the Mars Rover Performs Its Job
Springer-Praxis, 2018
Approx. 400 pages
$44.95

Number 2: My book is now TWO books! That one is going to take a little bit of explaining.

I began writing a book about the Curiosity mission more than four years ago. Right away I struggled with its vast scope. The rover's story on Mars is an adventure. But in order to make sense of some of the most dramatic elements of that story, I had to write a history of the development of the mission; explain why it was sent where it was; explain the mechanical aspects of the rover (in order to explain why and how parts suffered problems); and explain how the instruments worked (in order to help readers understand the nature and limitations of the mission data). Nothing in that sentence mentions science results, which were barely scratching the surface (ha ha) during the first couple years of the mission.

Since 2013, I have managed to write Curiosity's story, but there were huge chunks of my book that were, essentially, reference material. And the science remained preliminary until the last year or two, when the very first papers have started synthesizing all the various instrument results into coherent Martian history. It felt anticlimactic to write so much and have so little to say about Curiosity's accomplishments. I took a sabbatical at the beginning of this year in order to wrestle the manuscript into shape, and made significant progress, but didn't finish, and in March I finally figured out why.

I wasn't writing a book. I was writing two books. One was a reference work about how the rover worked and operated, and the other was a science adventure. Thankfully, when I explained the problem to my editor at Springer-Praxis, he concurred, and the publishers agreed to split the project into two. The two books are:

The Design and Engineering of Curiosity: How the Mars Rover Performs Its Job, to be published early next year. It explains what the rover was designed to do, how it works, and how it has fared, mechanically, on Mars. It is a reference work, virtually an owner's manual to the Mars Science Laboratory mission. (A goodly chunk of it is relevant to Mars 2020.) It is an entire book in the spirit of this post on Curiosity's wheels. The manuscript is not yet submitted but will be in my editor's hands in 2017. Just an hour ago I did the last interview for it, in order to make sure it is as up-to-date as possible on the status of the drill. It contains lots of figures that look like this, and which are explained in the text: 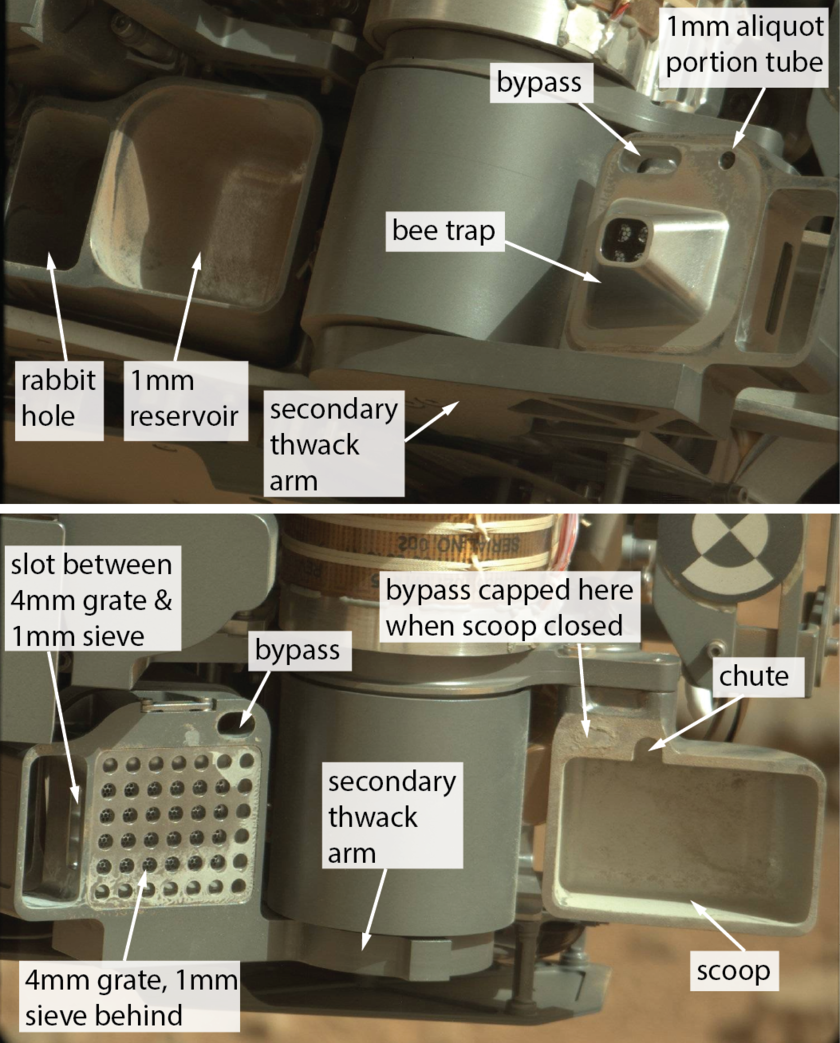 A figure from the forthcoming book The Design and Engineering of Curiosity: How the Mars Rover Performs its Job, by Emily Lakdawalla, illustrating the parts of Curiosity's sample handling mechanism that sift and portion out powdered samples of Martian material using a sieve with 1-millimeter holes.

The second book will be Curiosity and Its Science Mission: A Mars Rover Goes to Work, to be published in 2019. It will cover mission science, from landing site selection, through pre-landing mapping, and detailed surface operations. It will also synthesize the story of the surface adventure with the development of scientific consensus about the geologic record Curiosity is surveying. This one is about 60% written; I've gotten the rover beyond the Kimberley, and have lots to do to incorporate the new, meatier science results. And of course the rover has a habit of surviving and continuing to acquire data despite holey wheels and balky drill, so I'll be tagging along behind it the whole way. It will contain lots of pretty pictures of the landscape, and I'll read the rock record from those images, translating it into Mars' story.

Although I've signed on to twice as much work it's a huge relief to have split the books in this way, and the writing is going much better. The only thing I'm sad about is that I think the first book will be of less general interest than the second one, simply because it's less story-rich. But if you're the kind of person who hears the words "secondary thwack arm" and must find out what a thwack arm is and why it's called that, and also beg to know if there is a primary thwack arm, my first book will give you many happy geeky moments. Please pre-order it and I'll finish it as soon as I can!