Cheers erupted in the Von Kármán auditorium at the Jet Propulsion Laboratory early Thursday morning as a squiggly green line on a graph developed a crisp, tall peak, signifying that the Cassini spacecraft was calling home after surviving its first plunge between Saturn and its ring system. The passage had actually happened 22 hours previously, with Cassini out of touch with Earth. The mission had every confidence the spacecraft would survive the crossing, and the opportunity of doing science in the never-before-explored region of the Saturn system was too precious to waste any of that time talking to Earth.

We did it! Cassini is in contact with Earth and sending back data after a successful dive through the gap between Saturn and its rings. pic.twitter.com/cej1yO7T6a

Although the audience of "friends and family" at JPL had little reason to doubt Cassini would call home, emotions were high. Cassini is more than just a spacecraft to the people who command it. If the spacecraft had survived the ring plane crossing, it was still the beginning of an inevitable death. While the people in the room were proud of sending the old machine to do something new and scientifically rich, they were struggling with the knowledge that they were also sending it to its end.

To some people, the mission is like a member of the family, its development and progress inextricably entwined with the growth of their children. Project scientist Linda Spilker spoke about how her daughter Jennifer entered preschool when Linda started working on the mission, and was now grown, with a family of her own. 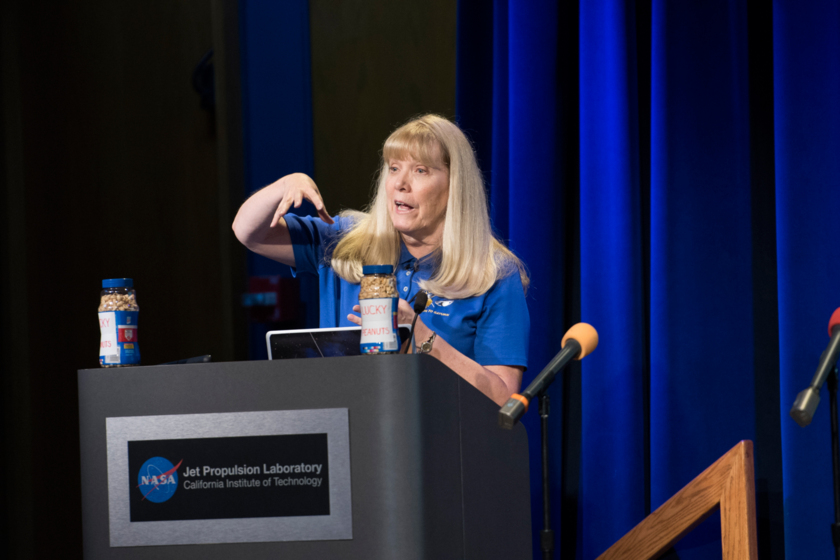 The "lucky peanuts" are a JPL tradition.

Cassini isn't just part of the family; it also created a family. The crowd bubbled with conversation as people caught up on each other's personal lives and laughed about Cassini memories. Not everyone in the room was actively working on the mission now, but they were all part of the family. Nagin Cox, a "Cassini alumna" who now works operations on Curiosity, is still part of the Cassini family. She entertained the audience as part of the Cassini Virtual Singers, a group of Cassini old guard and newbies alike who sang delightfully nerdy songs about the trials of Cassini operations. The gathered crowd laughed at the in-jokes. The most laughs accompanied a song performed to the tune of "Let the Sunshine in" (one of the altered lyrics being "Don't let the sunshine/into your boresight") as the singers tossed papers into the air signifying throwing away the Cassini flight rules in order to permit the spacecraft to end its mission with its fiery descent into Saturn. (I post one full set of song lyrics at the very end of this article, so you can enjoy the nerdiness.) 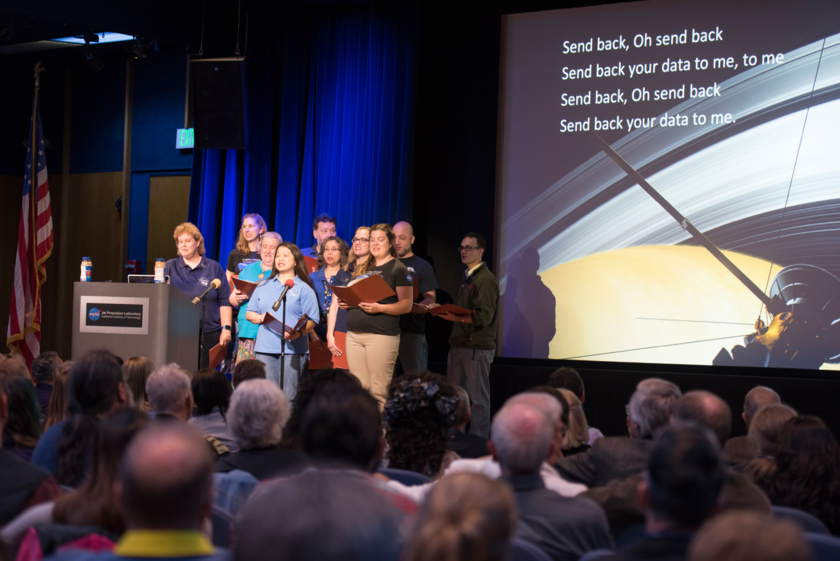 At a JPL "friends and family" event to mark Cassini's entry between Saturn's rings and the planet on the evening of April 26, 2017.

As the audience waited for Cassini to phone home, speakers explained what Cassini was accomplishing by traveling into the gap between the D ring and Saturn. Lead mission planner Erick Sturm explained why Cassini has to get so close to Saturn to be safe from D ring particles: Cassini photos show that the dust extends from the D ring quite far into what appears to be the gap between the D ring and Saturn. Cassini has to thread the needle between D ring dust at high altitudes and Saturn's uppermost atmosphere between low altitudes. 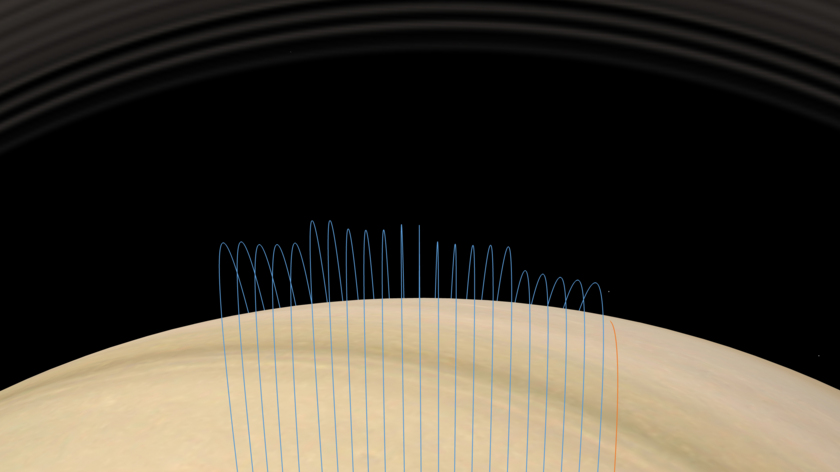 A side view of Cassini's final 22 orbits at Saturn. They cross the ring plane at different locations in order for Cassini's instruments to sample different parts of the innermost D ring. Visit the JPL website for a video of these orbits.

The position of the first ring plane crossing, yesterday, was judged to be the safest, and the mission hedged their bets by pointing the radar dish in the direction of their travel to shield sensitive instruments from invisible particles. But, Sturm said, it's possible that the interpretation of the images of the D ring is wrong; maybe it looks clearer between the visible D ring and Saturn because the particles were larger, large enough not to scatter light like dust does, large enough to pose a hazard to the spacecraft. Fortunately, that (admittedly unlikely) interpretation of the data turned out to be wrong (or, alternatively, Cassini turned out to be lucky). 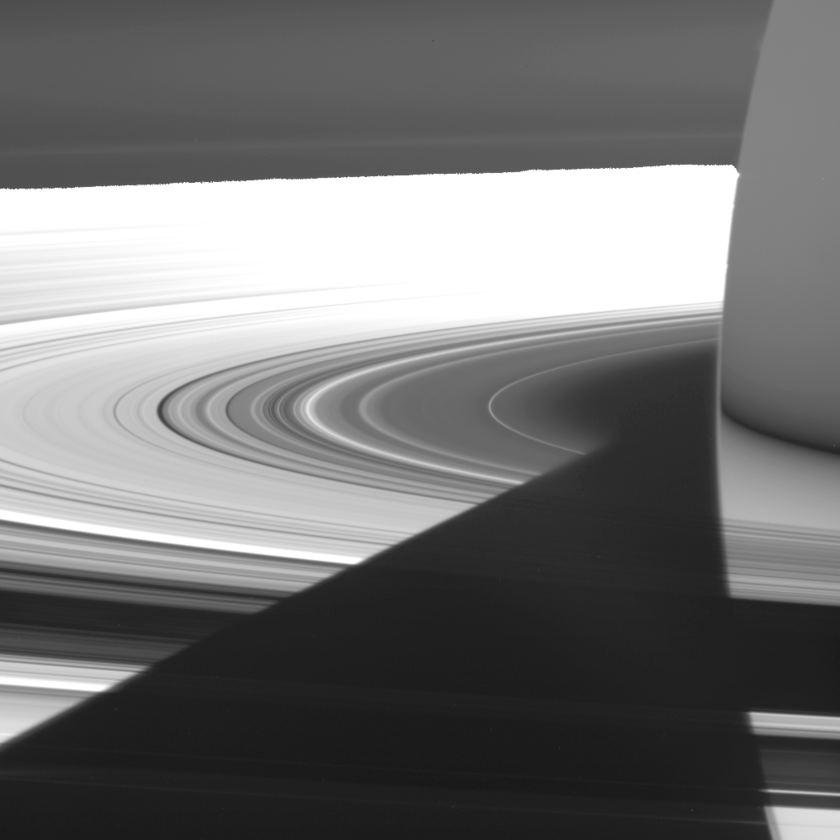 How far down does Saturn's D ring go?

An observation of the shadowed side of Saturn's taken by Cassini on 2 September 2010 was designed to see just how far the dusty D ring extends toward the planet. The sensitive camera exposed this image for 1.2 seconds in order to see the faint D ring, overexposing the outermost F ring. (Typical Cassini image exposure lengths to see moons and planet are tens to a few hundred milliseconds.) The set of observations showed that Cassini needed to pass within 2000 kilometers of the planet's cloud tops in order to be reasonably safe from D ring dust.

Linda Spilker spoke about the exploration of the fine structures in the atmosphere, the mass of the rings, and the magnetic field that Cassini's close orbits will accomplish. She mentioned that if Cassini can detect the tiniest offset between the magnetic pole and the spin pole, they might be able to answer the mystery of Saturn's day length. (Amazing, isn't it, that even after centuries of studying Saturn, we still don't know how long its day is or how much its rings weigh?)

Spilker explained that although Cassini is very nearly out of fuel, they do have a little bit of maneuverability left to respond to science results down to the very end. She said that the last five orbits in particular (the rightmost five blue lines in the diagram above) still have options to raise or lower their altitudes; the goal is to get Cassini's particle-scooping instruments as deep as possible into the atmosphere without going so deep that the spacecraft thrusters can't compensate for atmospheric drag. (If that were to happen, the spacecraft would tumble, and contact would be lost.)

Like the whole team, Spilker is proud of what Cassini has done and what it's doing about its final days. She's sad, too, contemplating the loss of the spacecraft. But there's another kind of loss she anticipates: the loss of "our intimate connection with Saturn." From Earth, we'll still be able to study Saturn's storm systems and the motions of its moons. But all those tiny structures in the rings, all the little ring-embedded moons, will be made invisible to us with the loss of Cassini. Once every fifteen years, she reminded us, we'll get to glimpse the ringmoons, as Earth crosses Saturn's ring plane. But that's it, until the next mission.

Here's a sampling of some of the images Cassini took last night. They're the first results of these close flybys of the planet.

These are some of the images that Cassini took as it passed incredibly close to Saturn for its first "Grand Finale" flyby on 25 April 2017.

You might notice that the pictures are black-and-white, small, and noisy. There are good reasons for all of those things -- actually one good reason: As Cassini passed within 2000 kilometers of Saturn's cloud tops, it was traveling at a speed relative to Saturn of 34 kilometers per second. That is very, very fast, almost too fast for the camera to take images without motion blur. To avoid blur, you have to take very short exposures, which means the images look noisy. You have to maximize the number of photons reaching your camera, which means not placing any color filters in front of the camera, so the pictures are grayscale. Even with that, there would be some blur and limitations to how fast the spacecraft can get so many images off of its detector, so they downsampled the images to half the camera's native resolution in order to get a somewhat continuous strip of photos of Saturn's atmosphere throughout the plunge.

We'll be enjoying the scientific results of this phase of the mission for years or decades to come -- at least until the next Saturn mission.

People are driven to compose songs by dramatic events, and few events in the normal operations of any flying space mission are more dramatic than the spacecraft entering safe mode, an automated response to a problem detected by the computer. That's happened to Cassini several times over the course of its mission. For Cassini, getting out of safe mode as quickly as possible was always a goal, because a missed opportunity to do science on a flyby might not ever be recovered (unlike a safe mode on a mapping orbiter or a rover, where there is typically an opportunity to repeat a missed observation if it's important enough). So here's a Cassini Virtual Singers song about safe modes.

"The Sound of Science"

Hello, Cassini, my old friend,
We've come to sequence you again,
Because the science teams are here waiting
For a sign that you are not safing,
And the data that is planted in your frames,
Still remains
Within the sound of science.

Restless nights they work alone,
Endless meetings on the phone
In the aura of the SOPC screen
Come the data heretofore unseen,
When my eyes were stabbed
By the flash of a red alarm
That foretold harm
And showed no sound of science.

And in the midnight meeting called
Ten thousand people maybe more,
People talking without thinking,
People typing without muting,
People writing songs that voices never share
We do not dare
Disturb the sound of science.

When we figure out what's wrong,
Uplink the fix before too long,
Get the sequence up and running,
Get the payload on and humming,
And the bits like silent data fell
Echo in the wells of science.

And the flight team bowed and prayed
To the golden god they'd saved,
And the tweeters sent out the word
Science from the craft again was heard,
And the boss said the words of the PI's
Are written in the press release
They never cease
To whisper.....the sounds.....of science.

2 Qs: 1. If the comms dish was pointed for the first pass bow first, does this mean for future crossings it won't act as a shield? I presume the priority is to establish the mass of Saturn exclusive of ring and moon mass to calculate ring mass alone. If so, does this mean the comms signal is needed at all times to determine Cassini's actual path precisely enough to calculate Saturn's mass? 2. Why not disable the safe modes now, considering that Cassini is now ballistic and no course will contaminate any moon? Does the current route increase the risk of charged particle hit saying events from the radiation belts, or is the craft too low for this?

Hi Emily! I nominated you for a blogger's award. Thank you for all that you do for science & space! https://jstrawberry.com/2017/04/29/mystery-bloggers-award/ Jules

Great post, I hope we see a return to Saturn soon!

Hi Emily, With all the hubbub about Cassini, I've not heard much about the health of Juno... can you point me to some news please?