Amazing photos of tiny moons as Cassini orbits among the rings

Cassini is in the thick of its "F ring" orbits now, so named because the spacecraft's orbit takes it just outside Saturn's F ring (and inside the G and E rings) every time it crosses Saturn's ring plane. Because its orbit is passing closer to the main rings, it is also passing closer to the moons embedded in the rings: Pan and Daphnis near the outer edge of the A ring, Prometheus and Pandora on either side of the F ring, Janus and Epimetheus outside the A ring. There are also plans to image "propellers" in the rings, clumps that are thought to form because of the presence of tiny moonlets (or especially large ring particles, take your pick). The first one of these images from 2017 landed on Earth yesterday, and it is a beauty. Behold: Daphnis, the tiny, 8-kilometer moon that orbits within a ring gap, gently tugging on the edges of the gap to create delicate scallops. I especially love the skinny little streamlet cupping the anti-Saturn side of Daphnis. 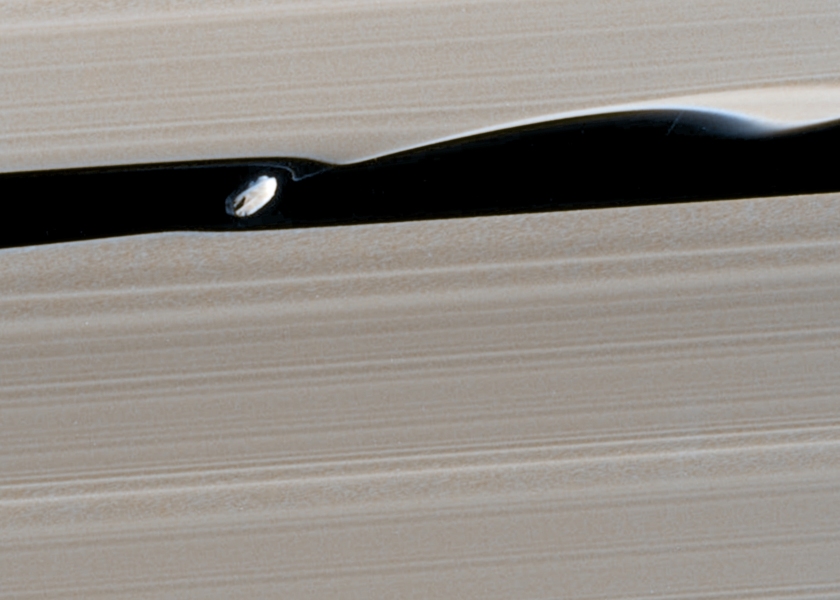 The presence of Daphnis in the image tends to distract the eye from the other exciting things that are going on. Here's another image from the same set of observations, with no distracting moon, only incomprehensible ring-edge structures. 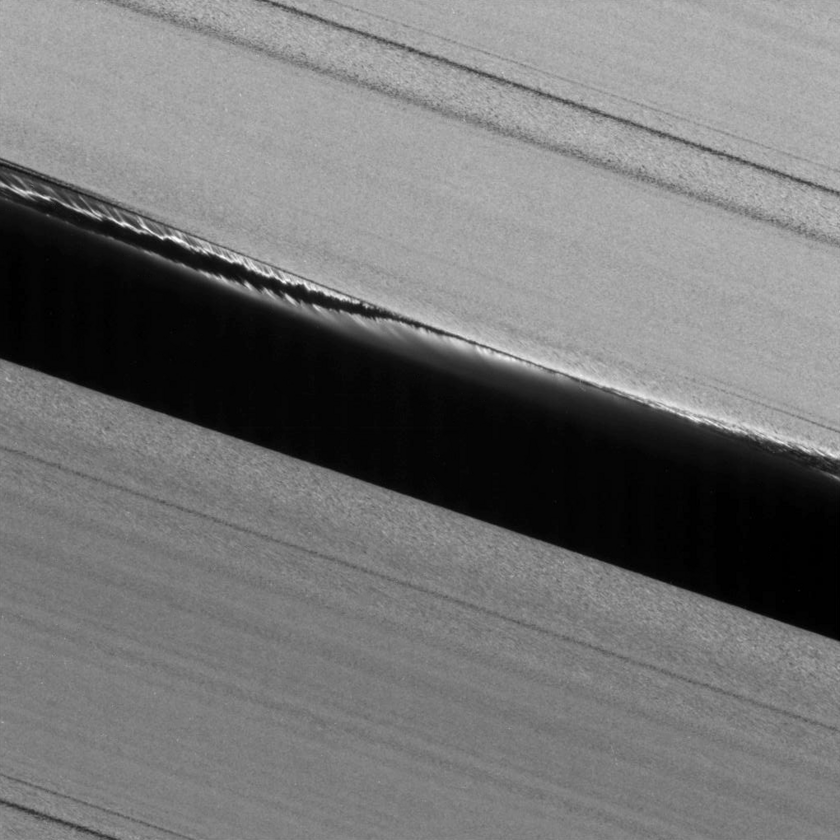 Structures in the Keeler gap

While attempting to image the elusive Daphnis, Cassini took this photo of striking structures on the edges of the Keeler gap on 16 January 2017. It was roughly 25,000 kilometers away from the gap at the time.

Plans for ring-moon imaging after Daphnis on January 16 include Epimetheus and Mimas on January 30; Epimetheus and the propeller Santos-Dumont on February 21; Pan on March 7; the propeller Earhart on March 22; and Atlas on April 12. Not all of these attempts will result in images, though. The ring-moons have tiny masses and are tugged around in their orbits by all the larger moons as well as the rings themselves. It is wretchedly difficult to plan observations months in advance in which the moons will reliably appear where they are supposed to. That's why you get frustrating photos like this one of Pandora, with its weird smooth crescent falling off the edge of the frame.

On April 22, Cassini changes its orbit periapsis, bringing the ring-moon observation opportuities to an end, and ushering in the final phase of the mission.

It's sobering to remember that Daphnis is just about the same size as two Comet 67-P CGs placed side-by-side. These images are simply stunning!

Hi Emily; When I edit the image, "Daphnis in the gap", I see vertical parellel lined-shapes on the image. Could those be real accumulations of the ring particles or some kind electronic related defects ?

Correction: I meant the image: "Structures in the ...gap" ! (Without Daphnis...)