Pluto is not the end

This article was originally published in the April 2016 issue of Sky & Telescope. I thought it was fitting to post it here on the one-year anniversary of New Horizons' historic encounter with Pluto. 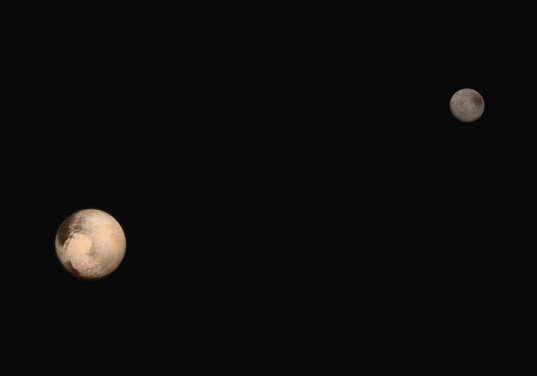 Portrait of Pluto and Charon

When New Horizons flew past Pluto last summer, NASA Administrator Charles Bolden heralded it as "the capstone event to 50 years of planetary exploration" adding that the Pluto encounter "completed the initial survey of the solar system." NASA's science chief John Grunsfeld said: "there is very little terra incognita in our solar system today." These statements are based on an outdated view of our solar system -- the hierarchical view of nine planets, with Pluto at the outer end, accompanied by a smattering of less-important bodies -- and they threaten the future of NASA's solar system exploration.

How outdated? For starters, the Voyager encounters with the outer planets revealed the diversity and activity of their moons, many of them larger and more recently active than some planets. Among them are worlds like Europa, Enceladus, Titan, and Triton, each of them as worthy of a dedicated mission as any of the planets.

Then, of course, the discovery of large Kuiper belt bodies unseated Pluto from planethood. We now know about thousands of solar-system objects beyond Neptune. Hundreds of them are large enough to be round, and their varying colors and albedos suggest that they're at least as diverse as the worlds that orbit the giant planets.

In fact, this "third zone" of the solar system is almost certainly stranger than anything we've seen before. New Horizons' flyby of Pluto and Charon bodies more varied than anyone had imagined. How weird do the other Kuiper belt objects look? Pluto is not the end of the solar system; it's just the beginning of the rest of the solar system. The Kuiper belt -- contrary to what Grunsfeld said -- remains almost entirely terra incognita.

Even within Neptune's orbit exist worlds we've barely touched. We now understand Uranus and Neptune to be a distinct class of planets from Jupiter and Saturn, and they have changed in the quarter-century since we visited them. We need to orbit our ice giants, probe them, and understand what they can tell us about similar-sized exoplanets.

As for those enticing moons, Voyager 2 managed only very distant, low-resolution views of Uranus' moons; Charon's surprisingly youthful surface makes me wonder how most of them truly look. And we don't know how time changes the appearances of these active, planet-circling worlds -- Triton, Titan, Enceladus, Io, possibly Europa.

We have never visited any of the icy Trojans and Centaurs, populations roughly as numerous as the main-belt asteroids. Finally, missions like Rosetta and Hayabusa have shown us the dynamic nature of the solar system's tiniest worlds, and we'll likely never finish our reconnaissance of all of those.

Each time we step a little further into space, we see farther, ask new questions, have new destinations to travel to. But it's a constant struggle to win support for federal funding for robotic exploration beyond Earth. So to have our space-science leaders imply that our work to explore the solar system is in any sense complete is hazardous. We're not done with the solar system. There's so much more to explore. 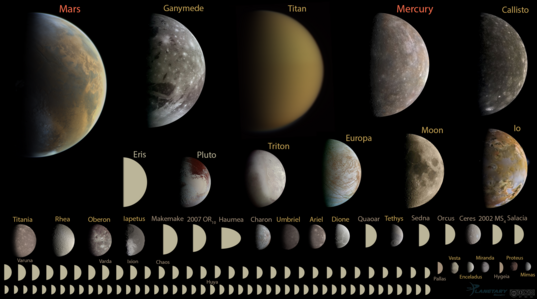 Every round object in the solar system under 10,000 kilometers in diameter, to scale (2015 version, update available)

Hi Emily! This is my first post here. Thanks for this awesome article! Question: how do we know about the objects on the Kuiper Belt? The radiotelescopes detect them? If so, what is impeding us to complete the mapping of the belt? Cheers, Sebastian

The ISS has a price tag of more than $150 billion. (https://en.wikipedia.org/wiki/International_Space_Station#Cost) while New Horizons cost about $0.7 billion. Which has done more for science, for space exploration, for astronomy, for knowledge? How many other "New Horizons" could we have sent for the price of the ISS?

Question: Do we still think Charon's surface is 4 billion years old? I've heard that touted a lot, but objects with surfaces that old NEVER show nearly as much evidence of geology as Charon's does (think Mercury, the moon, Callisto...). If Charon has been geologically dead that long, its surface would be as cratered as the older, more boring parts of Pluto.

Almost forgot...both Ariel and Miranda, around Uranus, have portions of their surfaces that are less than 100 million years old...pretty good sign that neither of them are geologically dead.

Almost forgot again...recent discoveries suggest that 2007 or10 is actually marginally larger than Oberon, Iapetus, Makemake, or Haumea, at about 1,535 km. This image needs updating...

@eltodesukane: Hi, eltodesukane. I'll be so audacious as to try and give this a 1st answer. I view ISS, New Horizons and every other mission out there as part of one & the same goal: finding stuff out. Each mission with its own, well, mission. NH being equipped for its specific tasks, as is Juno, and as is the ISS, capable for receiving additions quite manually. The ISS has been and still is invaluable as for the research done there, and it is rewarding to view the regular updates on this, e.g. on NASA's websites. Research on the ISS includes work of utter importance in regards to observations of our own planet (climate research is only one, but in these times immensely vital line of work), as well as low gravity experiments that are of benefit for life on Earth (e.g. health) and for future, humanned space exploration. Just to name a few, I'm sure other people will be able to add to this here. The costs appear enormous, but compare this with certain redundant military spending (which, as I understand, do not even meet the approval of the Pentagon), and the tag will seem a lot more reasonable. Personally I think it still could be more. Civilization can be defined by how it gets its priorities straight. Exploration on all levels should be on top there. Finally, there's quite a lot of tough hard choices being made in terms of which mission to greenlight, and on which other mission's expense. I don't think, though, that a running mission with this much success, a success based on international collaboration on top of it, should be dissed in this context. It's a matter of allocation.

The surface of Venus also qualifies as basically terra incognita. Sure we have crude radar maps, but no visible light imagery. We need a balloon or airplane mission capable of flying under the cloud cover for long periods of time to really "see" the Venusian surface for the first time. Same goes for Titan. I'd also like to mention that our image data of the Uranian satellites and Triton isn't just poor - it's also limited to the southern hemispheres. The northern hemispheres of those moons is literally terra incognita.

@Sebastian Aiara - Optical. But it's important to remember that light from the sun illuminating an object decreases proportional to the distance squared, and that loss continues with reflected light. So bodies out in the kuiper belt are *extremely* dim unless they're several hundred kilometers in diameter or larger. And you can start hiding Mars-sized objects out at distances of a couple hundred AU, Earth-sized ones even further, potentially even Uranus or Neptune-sized objects at several thousand AU. In fact, there's some fair evidence that there may well indeed be large objects out there (see the orbits of the sednoids) Programs like WISE/NeoWISE have done a lot for our knowledge of what's out there, but they're not nearly sensitive enough. LSST should be a very big help in terms of mapping. Telescopes like JWST will have vastly superior resolution, but for mapping you need very wide fields of vision, like with LSST. Then you can focus a high resolution telescope to try to pull out details from what you find.

@Bender772 Well... we have seen Venus's surface before, thanks to the Soviet Venera program. But only extremely limited patches of it, and none of the places that we're really interested in. There are indeed some excellent balloon proposals out there that could vastly increase our knowledge of this largely unknown world. But, as we all know, Mars gets the lion's share of exploration funding, and everything else goes fighting for the scraps.

One of the big disappointments of the year was not sending Dawn to Adeona. Sure it might get some more nifty data from Ceres, but to just throw away the ONLY CHANCE to see a new heavenly body is just wrong. The planetary science program is to see NEW things, and to just say, "nah, it's not worth it" is almost criminal. If we can do it, and the probe is already OUT THERE, it's NASA's duty to explore the darned thing. Each large asteroid has shown itself to be very different from all the others. We need data on as wide a selection as possible.

I'm surprised at the lack of interest in the new dwarf planet, 2015 RR2245. Only one story at nytimes.com, not mentioned here unless I missed it, or space.com

@eltodesukane The ISS is a microgravity lab. It would be quite another thing in many ways to have a prototype of an interplanetary spacecraft as a space station. But weightlessness is of interest to biologists and material physics and other things. The ISS is about using space providing services to non-space interests. Not about promoting space flight.

I fully support Emily's comments and the complacency of senior NASA officials is quite simply shocking when there is still so much to learn and so many places still to visit. For example, when was the last mission to Pallas or the last orbiter at the Uranian system? Answer: they haven't even happened yet.