All the time that I've been distracted by the New Horizons mission at Pluto, the other dwarf planet mission has been steadily, methodically sharing dozens of images of brand-new sights of a previously unexplored icy world. I'm talking about the Dawn mission to Ceres, of course, and for the last couple of days I've been making up for lost time, completely buried in the Dawn Ceres images that have been released over the last few months in NASA's Planetary Photojournal.

Lately, they have begun to release images taken from their High-Altitude Mapping Orbit (HAMO), just 1470 kilometers above the surface of Ceres. These images are super cool but because I haven't been paying close attention to the mission (distracted by Pluto!) I found it difficult to orient myself and understand the scale of the features. So, like any good geologist, I made a context map.

I began with this great map of Ceres that includes labels for the first craters to be named: 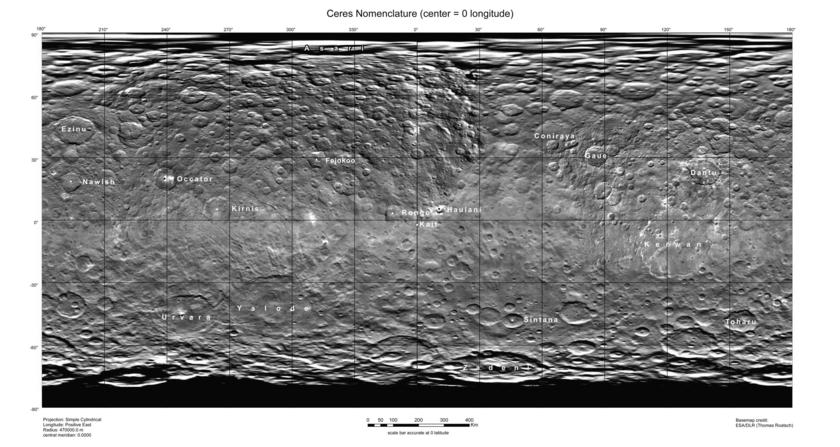 This map of Ceres shows the dwarf planet's surface with features that have been named as of August 14, 2015. It is a simple cylindrical projection centered on 0 degrees east longitude. A full list of crater names on Ceres is available at the USGS Planetary Nomenclature Gazetteer.

Next, I looked at the more than 50 Survey Orbit images that have been released to date, and located their positions on the map. Now, if I were a Dawn researcher, I would have had access to mapping and geographic projection tools that could have automatically produced these footprints. I don't have access to either those tools or the necessary geometric information about image pointing, and anyway I don't need to be so accurate; I just need a pretty good location for the footprints so that I can identify which images overlap a feature that I'm interested in. So I just drew all the footprints as quadrilaterals. They're not perfectly accurate, but it's close enough for my needs. Once I had the Survey Orbit images located, I could dive in and locate the smaller footprints of the HAMO images -- with a lot of help from a similar map already produced by user "ZLD" at unmannedspaceflight.com. Et voilà: 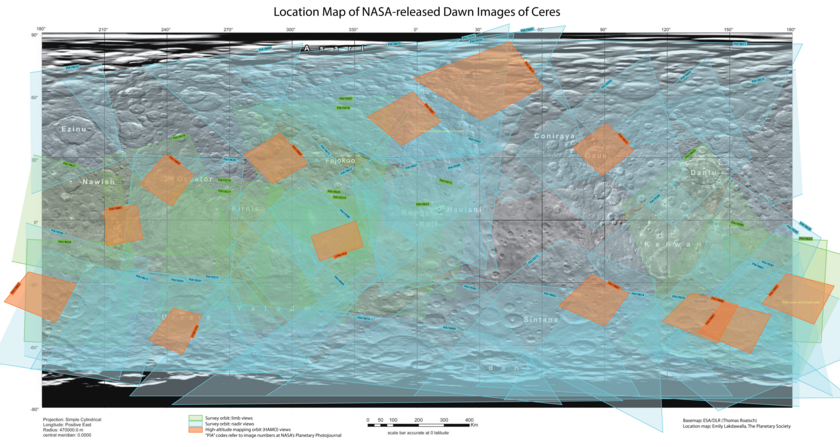 While I was going through the images to make the map, I made lots of notes on Ceres' fascinating craters and other features. That discussion will have to wait for a later post. But one thing that this map enabled me to do more quickly was to identify locations that had been imaged twice from slightly different angles, allowing me to assemble 3D views. So grab your 3D glasses or cross your eyes or click the flicker-gif links and enjoy Ceres in 3D! 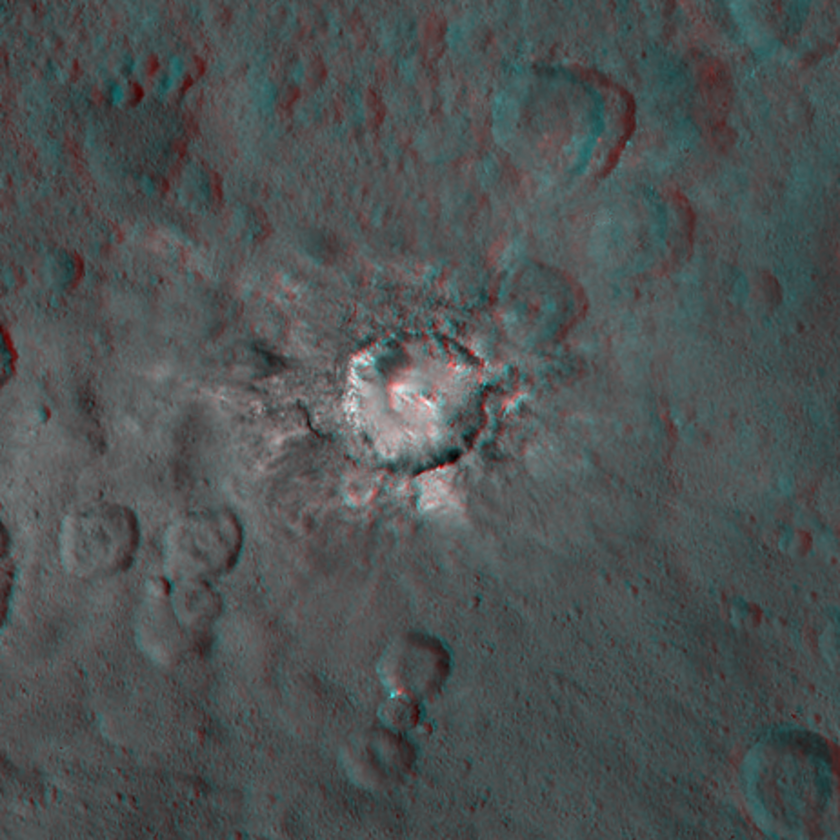 Haulani crater has long been known as "Spot 1," a bright spot on the surface of Ceres. Dawn revealed it to be an impact crater with bright ejecta. Haulani is 32 kilometers in diameter. This image is a combination of two Dawn images taken from Survey orbit on June 6 and 17, 2015. More formats: Left stereo | Right stereo | Flicker gif

Here's another, as yet unnamed and much smaller splashy crater: 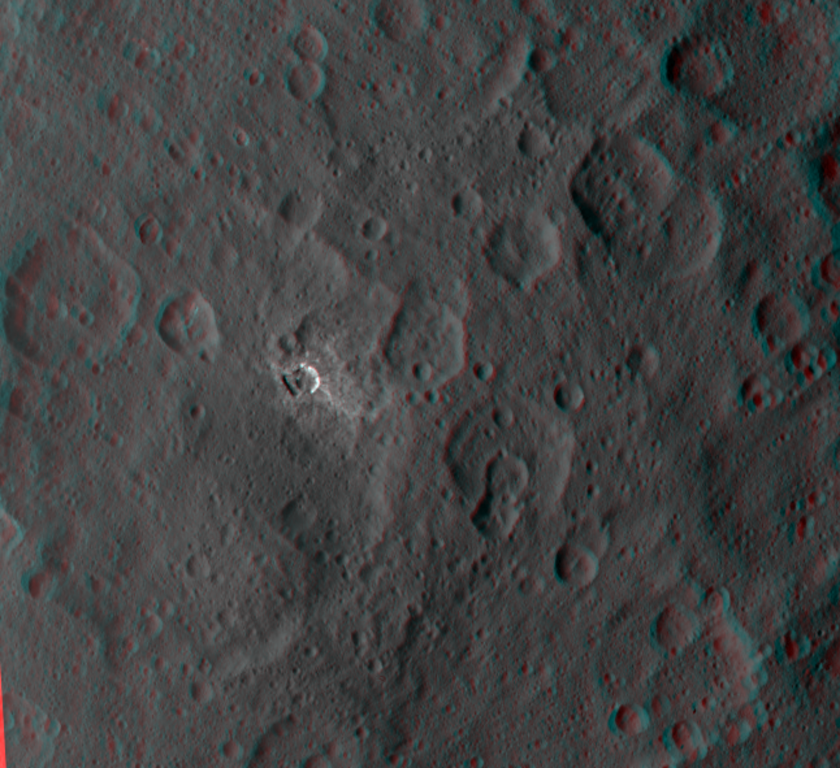 A region in Ceres northern' latitudes contains a variety of craters including one small one with a very bright wall and a fainter splash of bright ejecta. North is to the right. It is a combination of two images taken on June 21 and 24, 2015, during the Survey phase of the Ceres mission. The image is about 270 kilometers wide by 240 tall. This crater has been named "Oxo." More formats: Left stereo | Right stereo | Flicker gif

Urvara crater has quickly become one of my favorite regions on Ceres: 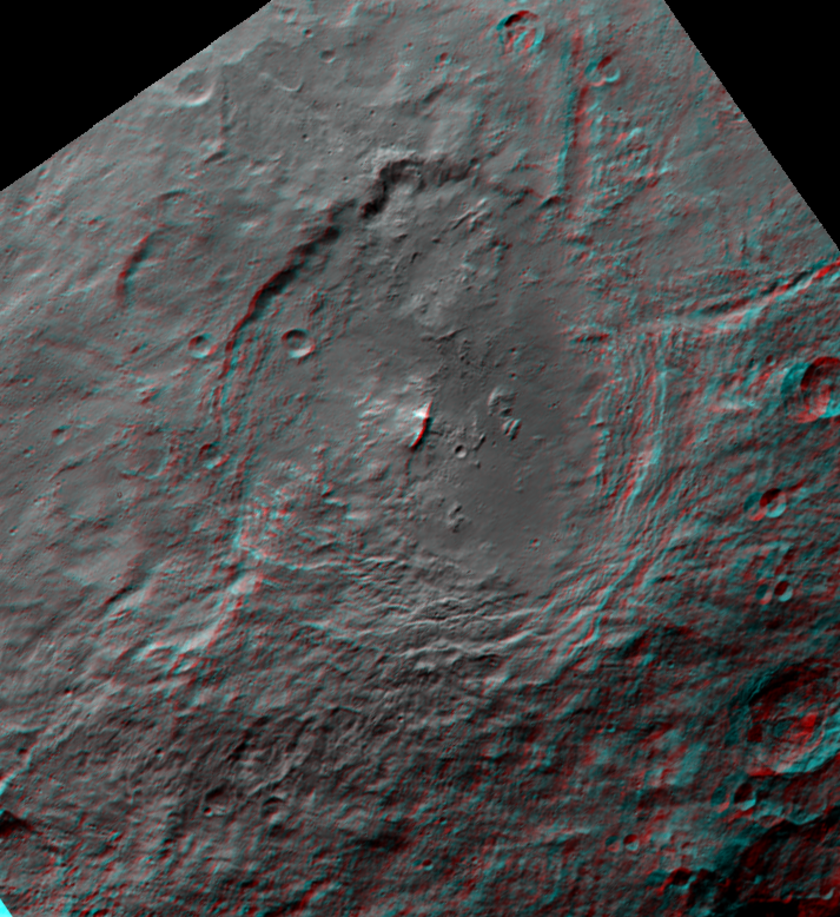 Urvara is one of Ceres' larger and fresher craters, located adjacent to the large Yalode basin in Ceres' southern hemisphere. This anaglyph is composed of two images taken on June 9 and 25, 2015, during the Survey phase of Dawn's Ceres mission. More formats: Left stereo | Right stereo | Flicker gif

But the spot with the best story to tell is this one, first noticed by some sharp-eyed folks at unmannedspaceflight.com, in the same images that contained the little unnamed splashy crater. In 3D you can really see the steepness of the crater wall, and the long runout of the landslide into the strangely hexagonal crater. (Ceres has a lot of those hexagonal craters.) 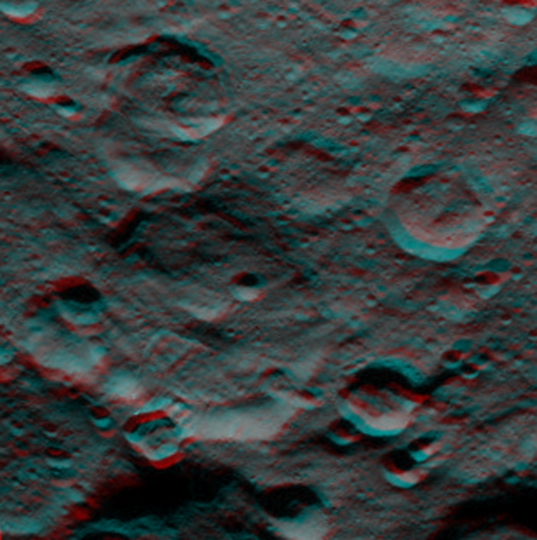 Near Ceres' north pole, an asteroid crashed into the steep rim of a hexagonal-shaped crater, causing a large landslide. This 3D image has been rotated to place north down in order to make the lighting more intuitive, and upsized by a factor of two. The whole image is about 125 kilometers across. It is a combination of two images taken on June 21 and 24, 2015, during the Survey phase of the Ceres mission More formats: Left stereo | Right stereo | Flicker gif

Now that I have my bearings on Ceres, I'll write more later about its strange landforms!

Fantastic work as usual, Emily. Unfortunately it seems that when you click on the 'parallel-eye' links, the pop-up only links to the left image and not the right. Any tips for getting a copy of both left and right images for parallel-eye stereo?

Have you got raw coordinates of images or did you guess them?

I always appreciate the flicker gifs.

Fantastic sets of images, the next orbit will make this type of image the most useful. Great post as always. Glad I bought those glasses as you recommended long ago.