A moon with atmosphere

What is the solar system moon with the densest atmosphere? Most space fans know that the answer is Titan; with a surface atmospheric pressure of 1.4 bars, its air is thicker than Earth's. A few of you might know that Triton's is the next densest. But what's the third? Fourth? Do any other moons even have atmospheres? In fact, they do; and one such atmosphere has just been discovered.

No other moon's atmosphere is quite like Titan's smoggy sky. From space, we can see straight to the other moons' surfaces, with no clouds or haze in the way. Most moons' atmospheres are extremely tenuous, so much so that their constituent molecules never collide with each other. Such collisionless atmospheres are called exospheres. The Moon has an exosphere, as does the planet Mercury.

A very few moons have atmospheres that are dense enough for their gas molecules to collide with each other. This can happen even in a pretty thin atmosphere. Triton's had a surface pressure of 14 microbars when Voyager 2 flew by. As the seasons have progressed on Triton the atmospheric pressure has increased by a factor of three or four, but it's still 20,000 times less dense than Earth's. Still, when air molecules can collide, you can have wind, and even weather. Such an atmosphere can also offer a moon's surface some protection from the particles flung around in giant planet magnetospheres. You can see on Triton how upper-level winds blow the tops of its geysers away. If we're very lucky, we'll see similar features when New Horizons passes Pluto this summer. (Pluto's atmosphere is denser than Triton's.) 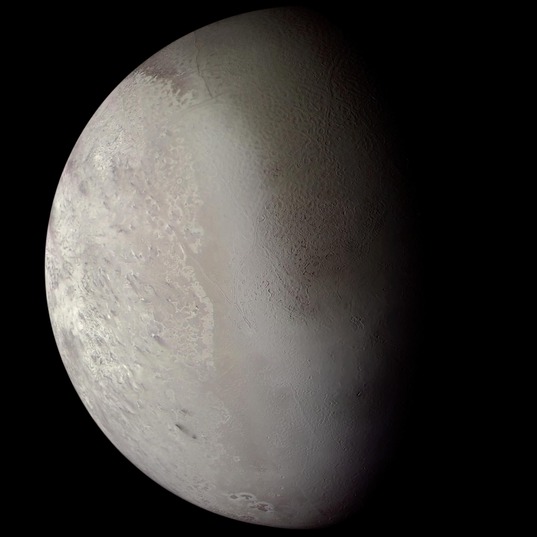 So which moons other than Titan and Triton have weather? We think there are two. The third-densest atmosphere in the solar system is Io's. From observations with the Submillimeter Array, Arielle Moullet and three coauthors measured sulfur dioxide, sulfur monoxide, and sodium chloride in its air. (Yes, salt is a constituent of Io's atmosphere!) Some of these gases, probably including all of the salt, is fed directly to Io's atmosphere by its constantly erupting volcanoes, but there's too much sulfur dioxide for all of it to be volcanic; some of it has to come from sublimating sulfur dioxide frost.

This animation, composed of UV3 frames from the Cassini Imaging Science Subsystem (ISS) taken on January 2, 2001 and magnified by a factor of 2, shows plumes from Io's Tvashtar and Pele Paterae (volcanoes).

At the surface, the peak pressure is around 1.9 nanobars -- that is to say, Earth's atmosphere is 200 million times denser than Io's. But it's still an atmosphere, and a variable one. Io's surface breathes over the course of its day, exhaling sulfur dioxide as it warms in sunlight, and pulling it back down to the surface as it cools at night. The volcanoes heat their local areas, making patches of denser atmosphere and out-flowing winds. 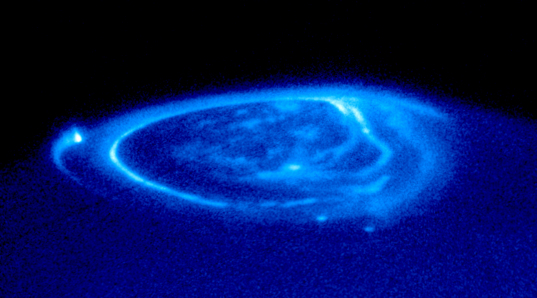 Auroras are curtains of light resulting from high-energy electrons racing along the planet's magnetic field into the upper atmosphere. The electrons excite atmospheric gases, causing them to glow. The image shows the main oval of the aurora, which is centered on the magnetic north pole, plus more diffuse emissions inside the polar cap. Though the aurora resembles the same phenomenon that crowns Earth's polar regions, the Hubble image shows unique emissions from the magnetic "footprints" of three of Jupiter's largest moons. (These points are reached by following Jupiter's magnetic field from each satellite down to the planet). Auroral footprints can be seen in this image from Io (along the left hand limb), Ganymede (near the center), and Europa (just below and to the right of Ganymede's auroral footprint). These emissions, produced by electric currents generated by the satellites, flow along Jupiter's magnetic field, bouncing in and out of the upper atmosphere. They are unlike anything seen on Earth. 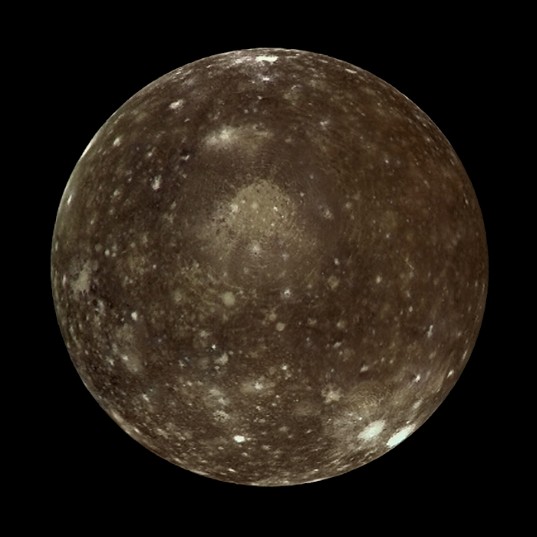 Galileo captured this global view of Callisto on its 11th orbit of Jupiter, on November 5, 1997.

Cunningham and coauthors used the Cosmic Origins Spectrograph on Hubble to detect the telltale ultraviolet emission of atomic oxygen and determine its abundance. Oxygen probably forms at Callisto when water ice molecules at the surface are split into hydrogen and oxygen atoms; some of the lightweight hydrogen escapes from the atmosphere entirely, leaving the heavier oxygen behind. John Spencer (who was second author on the paper) helped me convert from atmospheric column abundances to surface pressures. Cunningham and coauthors' work suggests that Callisto's leading hemisphere has a surface atmospheric pressure of 26 picobars -- that is, it is 40 billion times less dense than Earth's -- but that the air over its trailing hemisphere may be 10 times denser.

A dynamic atmosphere, even though very thin, slightly shifts our view of Callisto. Callisto is the outermost of the Galilean satellites and also, to use a highly technical term, the deadest. Its gravity field suggests that, unlike the other Galilean moons, it never got warm enough to differentiate into a rocky core and icy mantle, remaining instead a primitive mixture of ice and rock all the way down. A couple of years ago, Jeff Moore postulated that Titan might not have internal geological activity and may just be "Callisto with weather." It turns out that Callisto may have weather! Callisto's atmosphere is more than dense enough for its molecules to collide with each other.

Oxygen atmospheres form at Europa and Ganymede for the same reason that they form at Callisto. But their oxygen atmospheres are a factor of a few less dense than Callisto's, making theirs exospheres, not collisional atmospheres. No wind, and no weather. (At least not at present.)

There are four moons in the solar system that are known to have collisional atmospheres. In order of decreasing atmospheric column density, they are: Saturn's Titan, Neptune's Triton, and Jupiter's Io and Callisto.

One final remark. I think that the discovery of a collisonal atmosphere at Callisto is an incredibly cool result, the kind of thing you'd see on all the space blogs. The reason that you don't see it on other blogs is because it hasn't been the subject of a press release, and press releases drive most news reporting. If you read other space sites today, you'll probably read about how the moon formed or an observation of organic molecules in an infant stellar system, two cool results that were the subjects of press releases today. You may even read about the discovery (again) of subsurface ice on Mars. But there are lots of other things being discovered out there. You can find out about them by reading the tables of contents of the main planetary science journals, like Icarus, the Journal of Geophysical Research - Planets, Planetary and Space Science, and others. That's how I found out about Callisto's atmosphere!

Emily, superb post as ever. Joined the P Soc a few months ago as a result of your blog. Seemed unfair to enjoy it for free!

I believe part of New Horizons' mission is to investigate potential atmospheric transfer from Pluto to Charon, so we may soon find Charon taking up to third place in this list.

Cool indeed. And that´s why I keep reading you year after year.

My guesses were Io and Enceladus. I wonder when you will be writing an article comparing atmospheres in other solar systems?

I seem to remember reading years ago that the atmosphere on Titan is 4 times denser than the Earth`s, whilst having the quoted 1.4 bar pressure. Does anyone know if this is the correct figure? Thank you.

Do you have any data on what the flux of high energy ions is at different points in the Jupiter-Io system? I've always wondered whether it might be possible to use Jupiter as a natural particle accelerator for "free" antimatter production - but that takes energies in the GeV range. If there was somewhere that there was a natural high flux of high energy particles one could set up magnetic focusing / further acceleration toward a collision target and trap.

on the third page of the io's atmosphere presentation there is a figure with reference to a banana. can anyone clear up why that is for me? satellite footprints are a totally new concept to me. that is so beautiful, thank you. and to Brian's comment, atmosphere exchange at pluto/charon would be a marvellous phenomenon to study. so many new concepts, thank you everyone.

Steven, yes, it's just the ideal gas law. Titan's atmosphere has pretty much the same molecular weight as Earth's, but only about a third the temperature (100K as opposed to 300K), so for a given pressure it's about three times as dense. A pressure of 1.4 times Earth thus leads to a density about 4 times Earth's.

David, Thanks for responding with a detailed explanation. (It`s well over 40 years since I attended school here in London).

Steven, you're welcome! It's nice to know that not all comments are drive-bys.