Adding Churyumov-Gerasimenko to my scale comparison of comets and asteroids

I'm not sure how I missed this, but last December the Rosetta mission posted a color portrait of comet Churuymov-Gerasimenko. It's possible that I missed it because the comet is incredibly gray, having virtually no color variation anywhere across its surface. I just discovered it today, and that meant that I could add Churyumov-Gerasimenko to my scale comparison of comets and asteroids visited by spacecraft. Which I have now done! Enjoy: 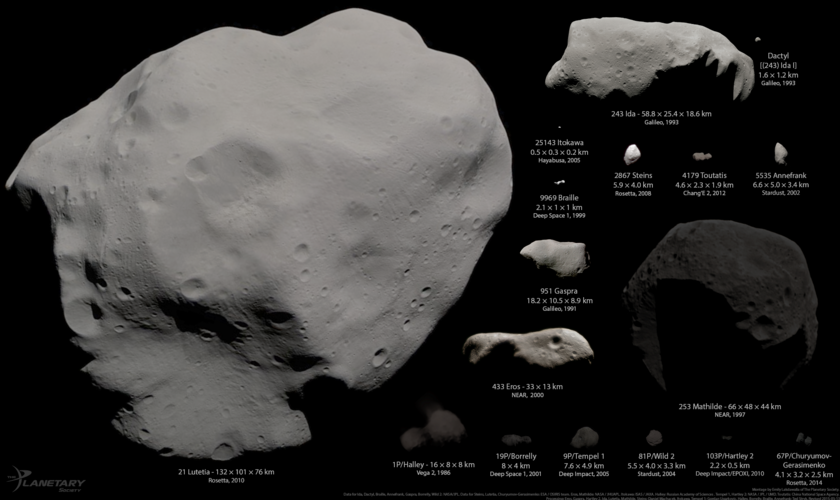 A montage of 17 of the 18 asteroids and comets that have been photographed up close as of August 2014, when Rosetta arrived at comet Churyumov-Gerasimenko. This version is in color and shows the bodies at their correct relative (though not absolute) albedo or brightness. Not included are Vesta or Ceres, both of which are many times larger than Lutetia.

I had to widen the graphic slightly to accommodate the new comet, but that's fine because there are more asteroids to be visited by spacecraft in the next few years; this diagram is going to grow to include 1999 JU3 as seen by Hayabusa2 in 2018 and Bennu as seen by OSIRIS-REx in 2019, not to mention the as-yet-unselected asteroid and Kuiper belt object targets of the PROCYON and New Horizons missions.

Ever since Dawn arrived at Vesta, I've received repeated requests to add Vesta to this diagram, since it's also an asteroid. And now that Dawn is approaching Ceres, I expect I'll get similar requests to add Ceres to it, too. Here is a quick-and-dirty comparison, containing the highest-resolution nearly-full-phase image of Ceres we've seen so far, that shows you why that request is hard to fulfull: 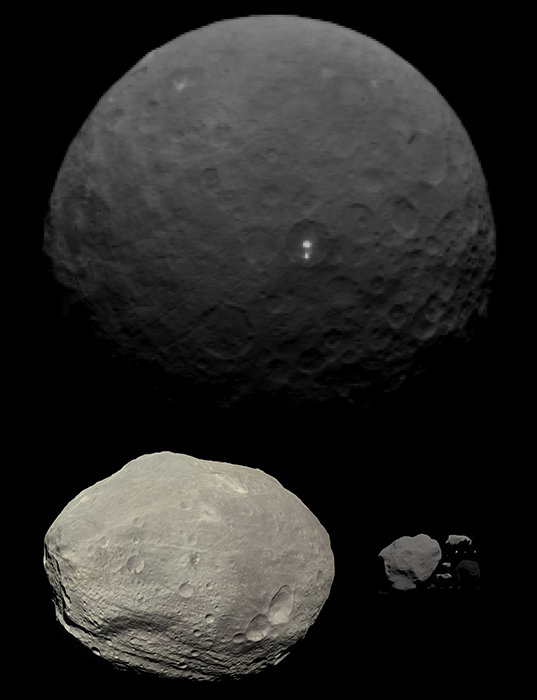 Ceres and Vesta really are not the same class of object as those other things! The images don't compare well to each other, because the best global view of Vesta that I have to hand has a resolution of 250 meters per pixel. At that scale, many of the asteroids that we've visited are just a dozen pixels across, barely discernible; poor Itokawa is just two pixels. It's better to compare Ceres and Vesta to the objects in the solar system that are in their size range: the mid-sized moons of the outer solar system. Later this year, I will be able to produce a graphic that compares the sizes, shapes, and colors of the largest asteroids, the mid-sized moons, and two similar-sized Kuiper belt objects: Pluto and Charon. I can't wait! 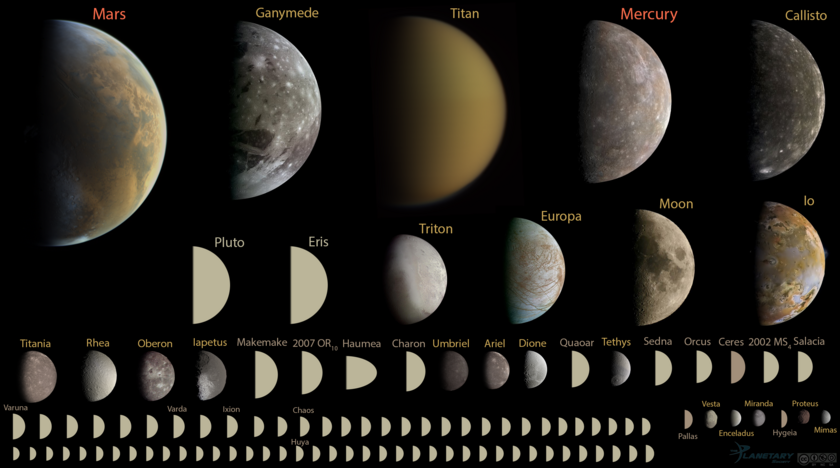 Thank you for these images, and for writing this up-to-date blog on so many planetary missions.

I'm wondering why the asteroid New Horizons visited in 2006, 132524 APL (known at the time as 2002 JF56), is not pictured. Is it because 100,000 km is not considered "photographed up close?" Or is it because MAVIC could barely resolve an object estimated to be 2.3 km in diameter? NASA's Photojournal has one lonely page on the body, PIA09230, with a couple of monochrome images. APL's 2007 press release, proclaiming " APL Rocks! Asteroid Named After JHU Applied Physics Lab," offers a colored image.

These comparisons are very nice, thank you. You say that Ceres and Vesta are in a class of their own, but to me it's not as if, for example, Lutetia is that out of place when put next to them. Itokawa on the other hand would benefit from not having to share an image with the likes of Lutetia and Mathilde, so there is always the alternative of punting the larger asteroids up with Ceres and Vesta while leaving the smaller bodies with an image of their own.

Do comets re-accrete the material they eject as they orbit a star? My temporary current working assumption is that the expulsed gasses and dust from comets don't achieve escape velocity from the comet, or maybe they do, in which case it makes sense that eventually melt away... actually, something just occurred to me, I guess that the solar wind helps a bunch of them to achieve escape velocity. Maybe there are some other factors. Anyway, I'm curious what affects the escape rate of gasses and dust on comets.