Rosetta's mission to comet Churyumov-Gerasimenko has changed character. For the period of time before and after the Philae landing, Rosetta was able to orbit the comet close enough that it was in gravitationally bound orbits, circling the comet's center of gravity. As the comet's activity increases, the spacecraft has to spend most of its time farther away, and its path is no longer bound to the comet. Instead, Rosetta cruises along a series of gently curved arcs, punctuated by turns and burns that make odd corners in its trajectory. It is now setting up to perform a close flyby of the comet for in-situ sampling of cometary material.

Before I write any more about Rosetta's plans, I have got to post some of the amazing recent NavCam images of this increasingly active comet. (Keep watching the Rosetta blog for more like this.) 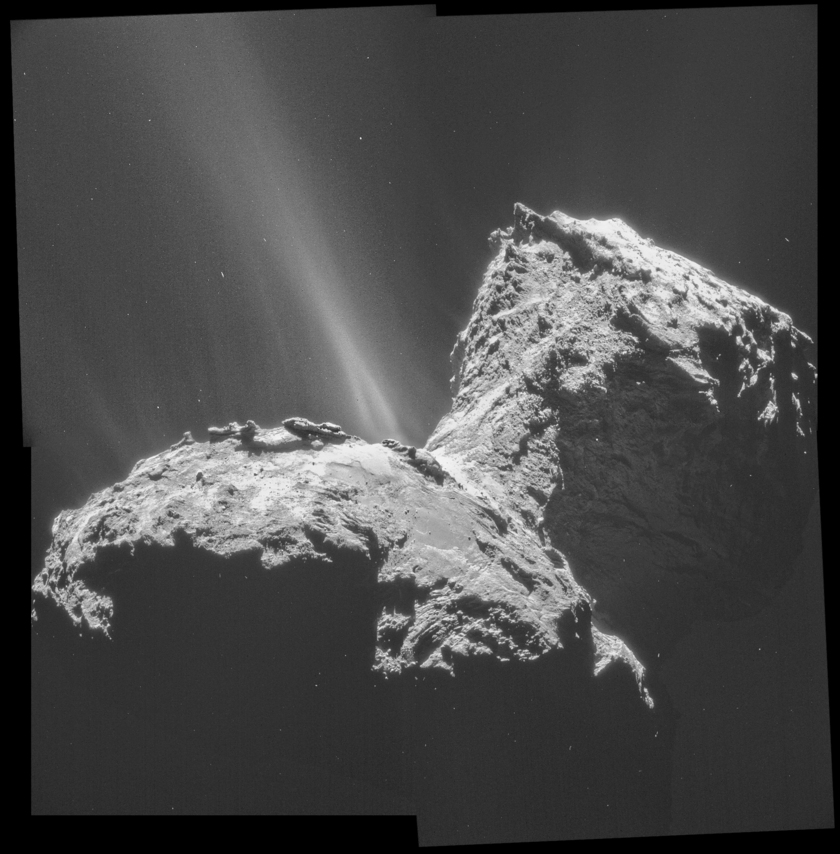 Jets behind the crags of Seth

Dramatic comet jets rise from comet Churyumov-Gerasimenko's neck region, in a mosaic captured by Rosetta's NavCam on January 31, 2015 from a distance of 28 kilometers. 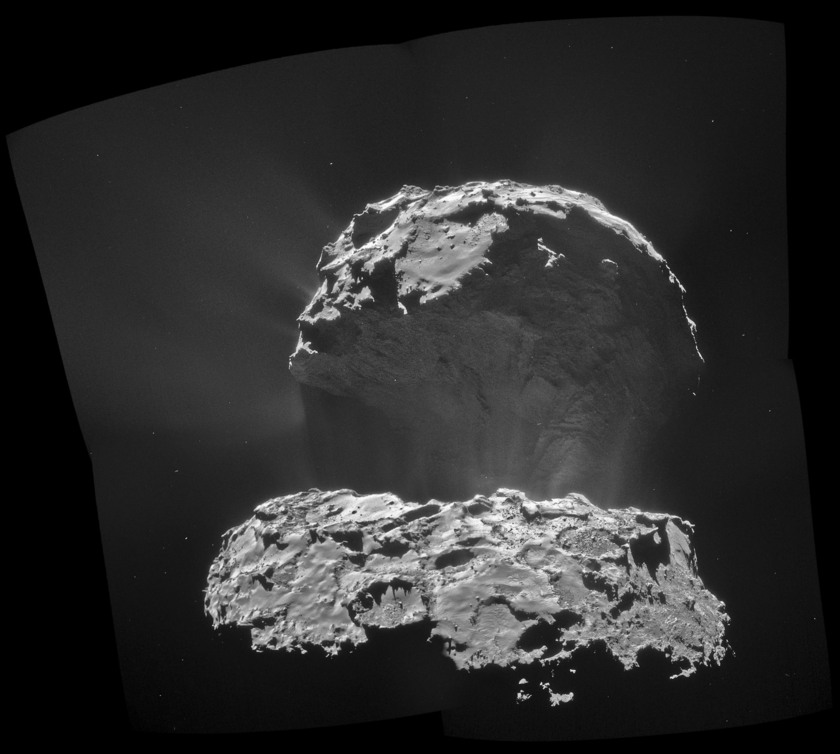 Comet-light on the cliffs of Hathor

This is the last NavCam view of the comet taken before Rosetta left the "bound orbit" phase of the mission. The view is across the large end of the comet toward the underside of the smaller end. The cliffs of Hathor are in shadow, but receive light reflected from the surface of the comet and also from the particles in jets and coma.

Both of those photos were taken from Rosetta's erstwhile 28-kilometer circular orbit. Here is a video detailing what Rosetta will be doing next:

For reference, here's a list of the altitudes Rosetta will be flying at specific dates during the coming month:

I was curious how many of these orbital legs had a scientific purpose and how many primarily represent point-to-point navigation. Of course during all of these legs Rosetta will be gathering scientific data, but some of them are considered "flybys," where science is the primary goal, while others are intended to set up Rosetta for future flybys. So I asked project scientist Matt Taylor to explain. He told me:

Planning is based on prioritizing certain major science goals over 2 week periods. These are broken down into four Discipline groups (DGs). DG1 looks at global nucleus characterization, morphology and composition. DG 2 looks at chemistry and mineralogy, isotopic composition of volatiles, and refractories of the nucleus. DG3 looks at physical properties and interrelations between volatiles and refractories. DG4 looks at activity and its development. For this close fly by [on February 14 at an altitude of 6 kilometers], DG1 were "prime" -- they are looking at getting the best measurements of the surface properties at a wide range of phase angles. We will fly through the sub solar point to enable this. [That is, they will pass directly between the Sun and the comet, getting a "zero phase" view of the comet.] We will also be making valuable in -situ measurements during this passage, hopefully getting a feel for the acceleration region, where the coma is "born", where the dust grains acquire their terminal velocity from exchange of momentum with gas molecules. Such mechanisms have only been modelled theoretically so far. The rest of the trajectory arcs are there to link up with the next fly by (which will be a far fly by, approximately sub-solar at approximately 50 km) again focused on DG1 goals.

The detail of passing through the subsolar point is interesting. Hayabusa famously viewed asteroid Itokawa in this geometry, and got close enough to see its own shadow cast on the surface, surrounded by a glory:

Pictures captured during Hayabusa's landing on Itokawa on November 19, 2005, show Hayabusa's shadow and the bright spot of the target marker containing 880,000 names on the surface of the tiny asteroid.

At an altitude of 6 kilometers, could Rosetta see its own shadow if the spacecraft passed precisely between the Sun and the comet? Rosetta has three cameras: NavCam, OSIRIS wide-angle, and OSIRIS narrow-angle, with angular resolutions of 82, 101, and 19 microradians, respectively. At an altitude of 6000 meters, the three cameras can see details as small as 50, 61, and 10 centimeters. Rosetta's wingspan of 14 meters would span 28, 23, and 140 pixels as seen through each of those cameras. I have no idea if Rosetta will actually be shooting photographs in the right place at the right time to see its own shadow on the surface....but how cool it would be if it did!

Amazing images, with Ceres and Pluto to come this will be a great year for planetary science.

The wingspan is over twice the given 14 meters. I think this is only the size of one solar panel.

The bright area around Hayabusa's shadow is actually due to the "opposition effect". A glory looks similar, but is an atmospheric phenomenon. Itokawa is a bit "atmosphere challenged". :)

stone: yes, the span of Rosetta's solar panels is about 32 meters

So, according to Emily's reckoning, their shadow would span about 64, 53 and 320 pixels in the respective camera images she mentions in the final paragraph.

jeff: other common terms for the backscattering effect is 'heiligenschein', 'aureola' and the 'Seeliger effect'.