What happened to Beagle 2? It's been a mystery for 11 years. That mystery appears to have been solved. Here is a color photo, taken on December 15, 2014, that members of the Beagle 2 and Mars Reconnaissance Orbiter HiRISE teams have determined is very likely to be the Beagle 2 hardware sitting on the surface of Isidis Planitia: 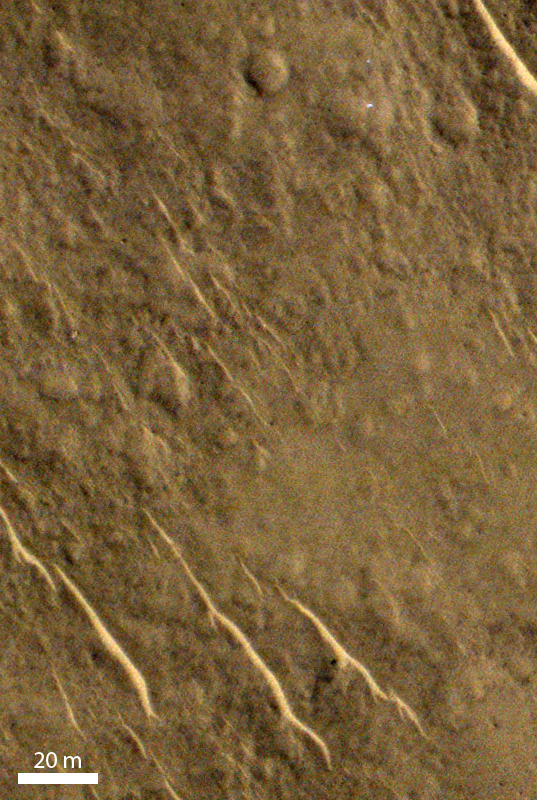 This crop from HiRISE image ESP_037145_1915 may contain the Beagle 2 lander (the white spot near upper right), its parachute (center left), and back cover (lower center).

This is actually the third picture of the hardware that HiRISE took. Comparing three images in the flicker gif below, it really seems that the bright spot at upper right is shifting around. More than likely, what we're looking at is actually light glinting off of some of Beagle 2's solar panels; which panel sends the glint to HiRISE depends on the lighting geometry of each observation.

If that really is light glinting off of deployed solar panels, HiRISE has shown us that Beagle 2 worked. Its entry worked; its parachute worked; its airbag-assisted landing worked; its initial deployments worked, at least partially.

Which is heartbreaking. So close -- and yet, never heard from.

There are many fine articles to read today on the search and the implications of what HiRISE has seen. I can't add much to that, so I'll just link to them here. Instead, I'll do what I do best: locate and process images, and guide you to where you can find them yourself. Would you have found Beagle 2, had you been searching?

We know that Beagle 2 departed Mars Express on December 19, 2003; the Mars Express Visual Monitoring Camera snapped this photo of the departing saucer. That was the last we knew of its existence. 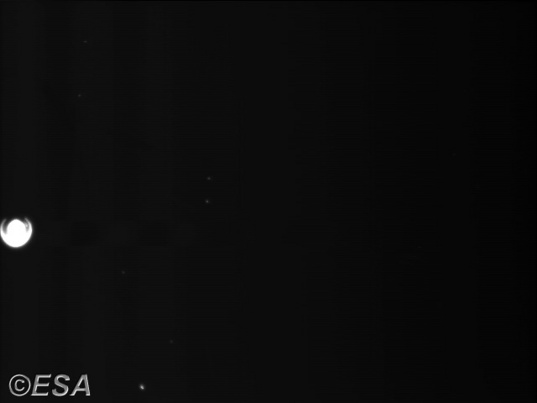 The bright spot on the left side of this picture is the back side of Beagle 2, slowly drifting away from Mars Express. This image, taken at 08:33 UTC on 19 December 2003, shows the Beagle 2 lander when it was about 20 meters away from Mars Express, en route to a surface landing on Mars. Beagle 2 was subsequently lost.

After its loss, Mars Global Surveyor searched for some time, and then HiRISE took up the effort. There's no question that Beagle 2 hit Mars; even if its parachute never opened, gravity must have carried it to the surface within Isidis Planitia. But searchers didn't know if they were looking for a parachute and open lander, or an impact crater. Beagle 2 was very small, and its parachute would not have been easy to spot.

Beagle 2 was a disk 0.65 meters across. If everything worked after landing, it would have unfolded a four-petaled set of solar panels, increasing its total size to a bit more than a meter. Although HiRISE can achieve resolutions as high as 25 centimeters per pixel, it takes more than one pixel to recognize an object; Beagle 2's small size is at that limit. In general, parachutes are easier to spot than landers, because they're bigger and brighter. However, Beagle 2's parachute is not so easy a target to spot. The parachute was made of spinnaker ripstop nylon, a gossamer-thin fabric weighing only 23 grams per square meter. This is so thin that it was quite translucent: 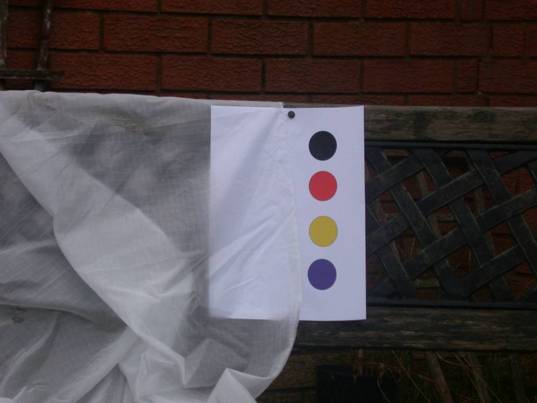 The parachute's rigging lines stretched 11.4 meters and connected to the backshell with a 30-meter-long strop, so one would expect the backshell and parachute to be separated by less than 40 meters.

A while ago, Doug Ellison simulated what the lander and its parachute and various other parts might look like on the surface, and then downsampled it to HiRISE resolution. Here's the result....your mileage may vary. 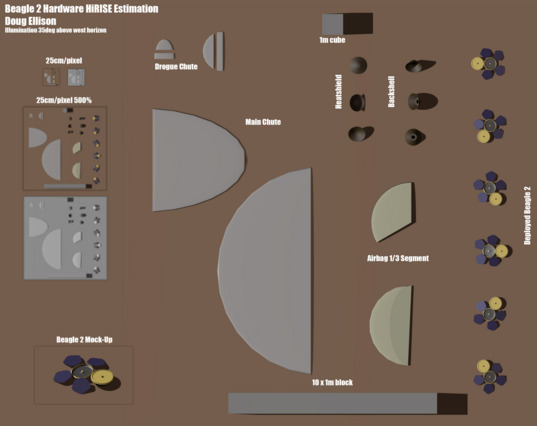 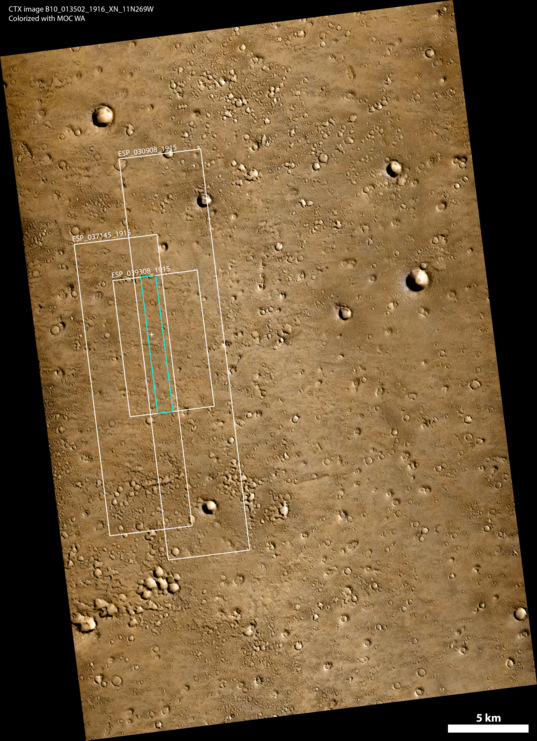 This map consists of a Mars Reconnaissance Orbiter Context Camera image, colorized with data from Mars Global Surveyor's Wide-Angle Camera. The white rectangles represent the footprints of three HiRISE images that may contain Beagle 2 hardware. The cyan rectangle shows the color strip in one of those images. A "+" mark denotes the location of the possible landing site.

Here is the view of the lander in the three HiRISE images: 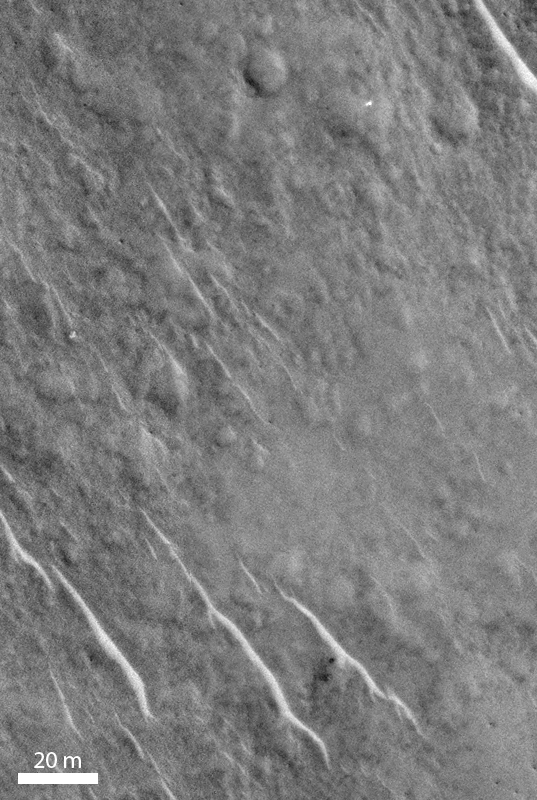 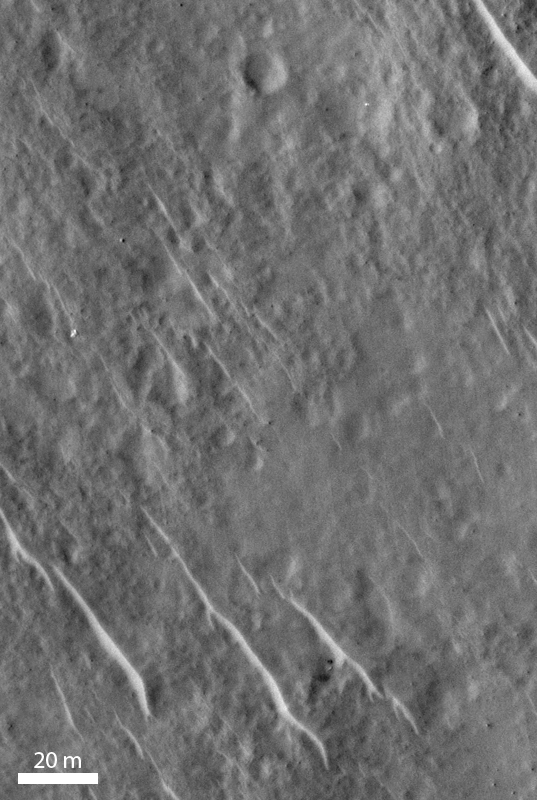 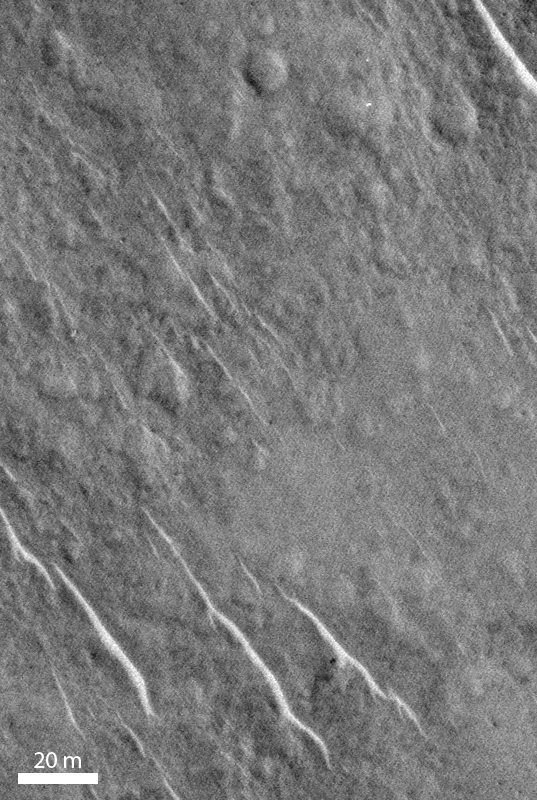 All three images show a bright object, although it appears to shift position slightly from one image to the next; this could be due to slightly different illumination geometry, with glints coming off of different solar petals in different images. Here's a detailed look at the lander:

If you'd like to take a look at the data yourself, and investigate the putative parachute and back cover, here is a guide to the location of the lander in the images. The map-projected data are easier to interpret in terms of scale and location, but for objects this small it's never a bad idea to check out the original pixels as they came off the camera detector, which is what you'll find in the non-map-projected data. I did look at that but it didn't give me any more or less confidence that what we are looking at is Beagle 2 hardware, so I'm not showing it here; I hope you enjoy investigating it for yourself!

Also check out Peter Grindrod's archive of context maps and images from a variety of other Mars orbiters.

But theoretically future astronauts to mars could fold out those panels, dust it off and reactivate it right? It doesnt seem to be to too damaged. I have always thought it would be smart to fix any old rovers early in any manned missions, simply because we wont be able to stay for very long at first and they have been our eyes so far.

How does this location relate to the previous location it was found, in 2005? see http://www.cbc.ca/news/technology/images-may-explain-space-probe-s-crash-landing-on-mars-1.542387

CoryR, the lander could not be reactivated.

Hi Emily Thanks a lot for your new great blog ! But I (and many other people) would ask you for what misterious reasons you have totally stopped to refer about Rosetta news Waiting for a your reply....

Excellent, balanced article. Have you bought in to the Media response to the announcement ? I am the person who put the image of the main chute material in umsf. I was Chief Engineer and Dep Mission Mgr on Beagle and have been looking for it ever since we failed to contact it on the Mars surface. I have 6 images of where I think B2 landed and was ready to publish my findings when the other B2 team people decided unlaterally to publish theirs. We had agreed previously to process the 2 candidate sites side-by-side and agree on the better one to publish. If you are interested I can email you a slide show of my findings, which I started in 2007, for your review. I am not convinced by the evidence published last week, nor do I believe it is possible to say whether any of the solar panels did/not deploy. My composite is more detailed and convincing. Let me know your response. Regards Stuart