I slept late this morning because it took a long time to settle down from the excitement of Philae's landing yesterday. I'm just getting up to speed on the news from overnight, which is mostly good: Philae remained in contact with the orbiter (which means the CONSERT radar sounding experiment was working), and it's sitting stably on the surface, although it's not anchored in any way. The lack of anchoring means that it may prove difficult to use the drill. Evidence from yesterday indicates it bounced quite high after landing, maybe up to a kilometer, so it is definitely no longer sitting at the spot where it first landed. The challenge this morning is for the OSIRIS team to try to locate the lander in their images. They know roughly where it is, just a couple of hundred meters from the intended site, but as far as I know they haven't spotted it yet. But it's alive, and sitting still, and returning science data.

There are now ÇIVA images on the ground, and the first two have been mosaicked and released this morning. It's just beautiful, and quite different to anything I've ever seen from a surface before. To my eye, there's some interesting brecciated stuff on the left side -- broken up bits of material (I want to call it "rock" but it's not really "rock" so I don't know what to call it), and then there's the platy smooth stuff over on the right side. I'm looking forward to the full panorama, which will be released this afternoon. These are just two of seven ÇIVA panorama images, and according to Mark McCaughrean, another of the seven is looking at sky. Which means that the lander is sloping, and possibly on its side. We'll know more this afternoon. 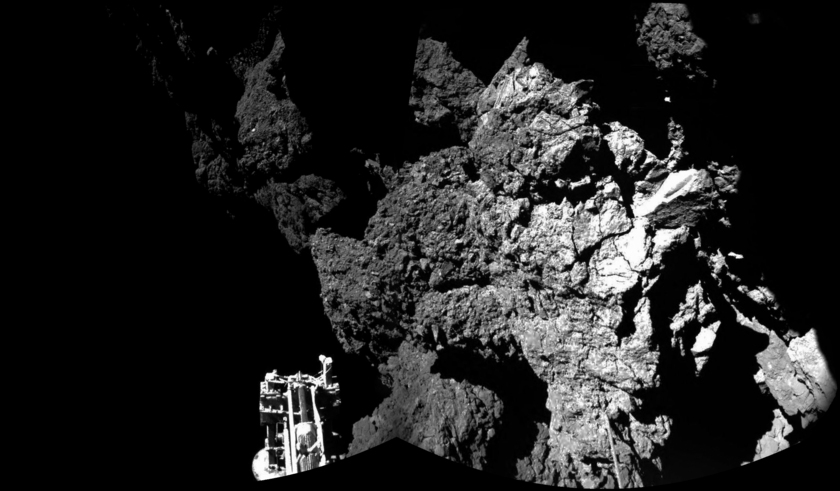 "mosaicked" threw me off for a few seconds. Then I figured out you verbed a noun.