What a great piece of news to receive upon returning home from vacation! There is now a small piece of the solar system named for me: asteroid 274860 has been formally named "Emilylakdawalla" by the International Astronomical Union. Here's the citation as it appeared on page 324 of Minor Planet Circular 88763, dated July 12, 2014:

(274860) Emilylakdawalla is a main-belt asteroid, traveling around the Sun once every 5.14 years. You can get all of its stats and see an orbit diagram via the Jet Propulsion Laboratory's handy-dandy Small-Body Database Browser. Since it's in the main belt, it has a nearly circular orbit at about 3 astronomical units (AU) from the Sun so never gets much closer than about 2 AU away from Earth; its next closest approach is just a couple of months from now, on October 6, 2014. It has a particularly close approach to Earth in April 2017 when it will be only 1.87 AU away.

Asteroid (274860) Emilylakdawalla's position on the date of its discovery

Who gets asteroids named for them? These days, it's often people involved in space science and asteroid observation, professionals and amateurs both. In fact, the same Minor Planet Circular that included my namesake asteroid has lots named for friends and acquaintances of mine in the space science community, so congratulations to Olivier Barnouin (8799), Paul Schenk (8807), Ralph Milliken (9003), Brett Denevi (9026), Bill Mckinnon (9526), Anne Verbiscer (9726), Britney Schmidt (24413), Harry Hiesinger (26811), and Phil Christensen (90388), among many others. It's an honor to be in such company! You'll notice that "their" asteroids all have lower numbers than mine, and indeed most of the current professionals who were asteroided in this round have asteroids numbered in the 8 or 9000s. All of these asteroids were discovered more than a decade ago -- the 8 and 9000s were discovered in 1981. There are large batches of unnamed asteroids from different sky surveys; different people's namesake asteroids were proposed by groups drawing from different name batches. Actually, technically, the naming rights of any asteroid that has been unnamed for more than a decade since its numbering is up for grabs.

But asteroids don't have to be named for scientists or observers; asteroid namers can choose to honor nearly anyone, with a few restrictions. Other notable names from outside the astronomy community announced in this most recent circular: Harriet Tubman (241528 Tubman), Aretha Franklin (249516 Aretha), Sojourner Truth (249521 Truth), Eugenie Scott (249540 Eugeniescott), and UNESCO (274300 UNESCO). The first four in that list were recent WISE mission discoveries whose names were submitted by WISE principal investigator Amy Mainzer. A scattered few others were named for spouses, community, or cultural figures -- teachers, doctors, artists, novelists, architects, even places (the city of Edinburgh now has a namesake asteroid, number 8283). It's a big asteroid belt, and there's plenty of teeny worlds out there to be named!

I'm delighted to have been chosen for this honor by the asteroid's discoverers, Rainer Kresken and Matthias Busch. Rainer and I first talked to each other in December when he offered to submit an asteroid naming proposal to the IAU for Nelson Mandela if I wrote the citation. That naming request was turned down, but afterward Rainer told me he was going to submit my name to the IAU, which was awfully nice of him! He also told me that ESA's Daniel Scuka had a hand in writing the citation, so thanks to Daniel, too!

Rainer and Matthias discovered (274860) Emilylakdawalla using the European Space Agency's Optical Ground Station through a project called Teide Observatory Tenerife Asteroid Survey (TOTAS). Rainer said: "(274860) Emilylakdawalla was discovered in the very first observation run of the TOTAS amateur project that is kindly supported by ESA. ESA grants observation time at the OGS telescope and covers all operational costs. Amateurs do all the rest. TOTAS is the brainchild of Matthias Busch, who also did all the coding to make TOTAS work."

Here are the discovery images:

And the happy discovery team during their 2009 observing run: 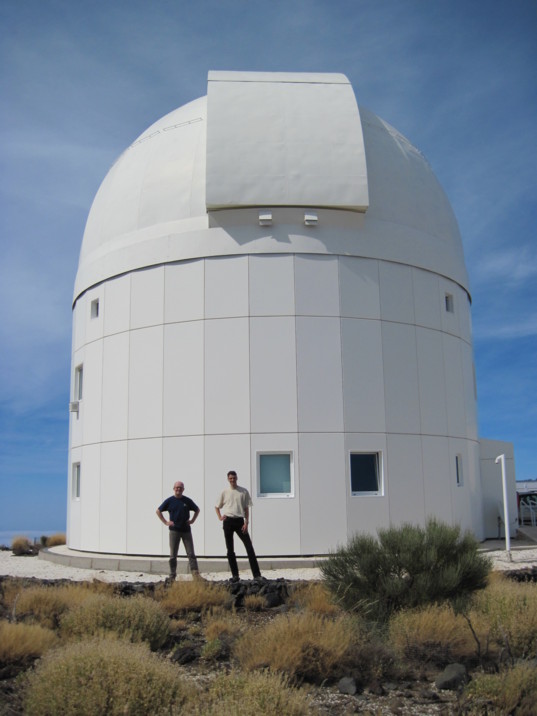 I'm lucky enough to be friends with a couple of solar system astronomers, Alex Parker and Andy Rivkin, who dug into publicly available data to find out more about my namesake asteroid. Andy looked at its orbit and suggested it might be in the Eos family of asteroids. So Alex analyzed the orbital elements and confirmed that:

These are squarely within the limits of the proper elements ellipsoid we defined for the Eos family (http://arxiv.org/abs/0807.3762, table 1): 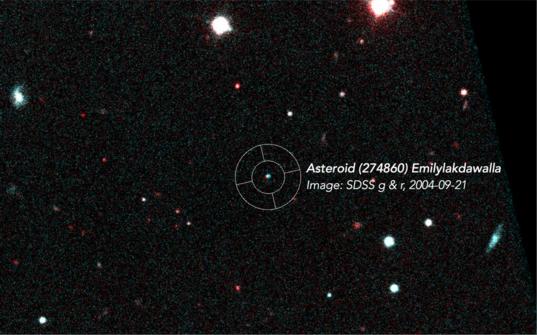 Alex queried the Sloan Digital Sky Survey's Moving Object Catalog to find out what he could about the asteroid's color:

I've pulled out the line from the MOC that agrees with the JPL Horizons predicted location of Emilylakdawalla (to within about 0.8" at the observation epoch). You can look up the format here.

... but the i-z color is highly uncertain (inspecting the data directly, I'm not surprised - the z' exposure is pretty low-signal). Given the uncertainty, the color is consistent with the Eos family color ellipse as defined in my paper.

Alex concluded, from the orbit and color information, that the evidence is good that this object is a member of the Eos collisional family." For his part, Andy Rivkin said that the fact that it's probably in the Eos family suggests that it might be "an unusual spectral type, the K class, which has been linked to the CV chondrites (including Allende)." Now I have to go buy a piece of Allende! Andy also said that, given that brightness:

It's almost certainly about 2 to 2.5 kilometers in diameter for the kind of albedos we expect in the Eos family. If it's unrelated to Eos it could be as big as 3.5 kilometers, if it's like the typical non-family objects in that region. If one believes the spectral linkages and meteorites that have been proposed for Eos-related objects, Emilylakdawalla is a few-kilometer CV chondrite body full of calcium-aluminum-rich inclusions and organics from a partially-differentiated body that was once 200-plus kilometers in diameter and disrupted about 1 billion years ago.

So that's the story of (274860) Emilylakdawalla as we know it! Many thanks to Alex and Andy for their insight, and to Rainer and Matthias for the honor.

Congratulations! They would've chosen a prominent star in the sky, but you already are that, so an asteroid seemed more exciting. Hope your rocky you doesn't come down and kill us one day.

Congratulation Emily!! I'm a big fan of your blog, though I don´t use to comment much. Thank you very much for this excelent blog. And I think you deserve it. PS: Maybe the close-approach you mean is in 2117 ?...

Why was the proposal to name an asteroid after Nelson Mandela turned down?

Congratulations Emily....this calls for a party.. Completely agree with Arbitrary - Now there is Star and an asteroid named Emily

Congratulations to you Emily!!! Wow an asteroid named for you! You deserve it too! Thanks for all you do for space exploration! Your asteroid has quite a history! I wonder how many sister pieces you have out there. Finding and counting those up would show an interesting find and bring forth a great question... "Of all the bodies in the main belt, how many major bodies were there that contributed to the forming of the main belt?" A lot of geology work could answer that one day.

I'm glad that science through theplanetarysociety your divulges. or whether you're a scientific disclosing, good for the appointment of an asteroid with your name, but you have to get used occasionally, answering to whom I write, not always but occasionally, do not forget that there are people who love you from Uruguay, my best wishes for success in your work.

While utterly cool, I hope this honor doesn't preclude further, perhaps even grander recognition of your contributions, Emily!

Congrats! I looked it up on the minor planet center. Roughly magnitude 21. So, to see it visually, you'll need at least a six meter telescope. I'm afraid that means photography. Even there, it will be a stretch with what's easily available here.

Congratulations. Really, for a dedicated person as you are, a prominent star or an exoplanet should have your name.

Couldn't have happened to a nicer girl. Congratulations! Now there is a big rock watching from above at everything you do. You'd better not let it down (see what I did there? ;-) )

Two days ago I read in the local newspapers here in India that another asteroid has been named after an Indian boy who helped find its parameters.