Emily Lakdawalla and Courtney Dressing talked about just how common Earth-sized exoplanets may be in our neighborhood. Courtney and her advisor recently published a paper about Kepler data on nearby planets around cool stars (PDF), which was the subject of a press briefing last week.

Courtney's name should be familiar to Planetary Society members -- nine years ago she was one of a group of 16 high-school students who were at JPL during the first days of the Spirit and Opportunity missions as part of our "Red Rover Goes to Mars" project.

Below is a recording of the event. 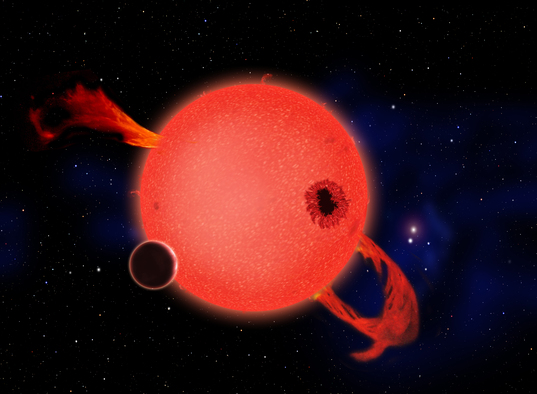 When it's young, a red dwarf star frequently erupts with strong ultraviolet flares as shown in this artist's conception. Some have argued that life would be impossible on any planet orbiting in the star's habitable zone as a result. However, the planet's atmosphere could protect the surface, and in fact such stresses could help life to evolve. And when the star ages and settles down, its planet would enjoy billions of years of quiet, steady radiance.

Searching around for images of Courtney from her days as a Red Rover Goes to Mars Student Astronaut, I found this awesome B-roll recorded by a professional at JPL as Courtney and her partner Rafael Morozowski were taking a tour of mission operations with NASA's Dave Lavery. I also spotted Mark Lemmon and Jim Bell. At the end, they depart very late at night -- they were working on Mars time and their days ended in the wee hours of the morning. Fun! (The video starts after about 40 seconds of test pattern.)

This link to the paper works for me: http://www.cfa.harvard.edu/news/2013/dressing+charbonneau2013.pdf In the visible universe, there must exist (extrapolated) more than 10^20 (hundred (USA) quintillions) earth-like planets, a mind-boggling number!

Courtney can you see an Exoplanet in the night sky with the naked eye and how would it differ from other stars?

An entry point for understanding stars may be Hertzsprung–Russell diagrams. Knowledge about nuclear fusion is necessary. @Larry Roark: We can see stars, that have exoplanets, with naked eye. The exoplanets themselves are too faint and too close to the stars for naked eye. The Kepler telescope doesn't distinguish exoplanets directly; it measures variations of the star light, like brightness and color, from which the exoplanets can be inferred. It works like inferring the existence of our moon from eclipses.