A good-sized asteroid is passing relatively close to Earth shortly: 3-kilometer asteroid (285263) 1998 QE2 will pass within 5.8 million kilometers (about 15 times the distance to the Moon) on May 31 at 20:59 UTC. It poses no hazard to us; instead, it's a nice close pass by a nice big object which means we'll get some nice quality science out of its flyby. Alan Boyle has rounded up the various ways you can tune in to its close passage. As I post this, a JPL webcast is about to begin, the second such broadcast today.

Here are the first-released radar images of the asteroid, which contain a little surprise: the asteroid has a moon! In fact, it's quite a large moon, maybe 15-25% the size of the main body. I know it doesn't look that big in the images below; I'll explain why in a moment. First, the photos: 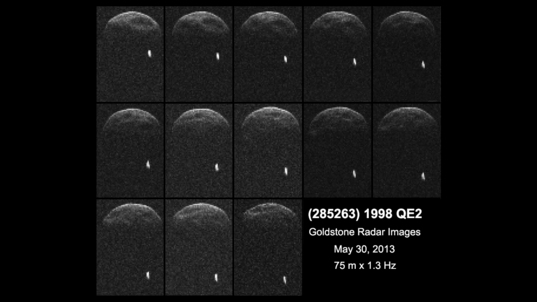 Of course the first thing I want to do with a set of fifteen images is to animate them. NASA posted their own animation, but I like to process the images a bit first to reduce the distracting effect of the radio speckle (by performing a Gaussian blur) and to try to make the pictures match each other in brightness a little better. That's what I did to produce the animation below. You can see that although the main body has a fairly round shape, it very clearly has some large craters on it.

Animation of thirteen images captured by the Goldstone radio telescope on May 30, 2013, as asteroid (285263) 1998 QE2 was only 6 million kilometers from Earth. Its closest approach was yet to come, on May 31 at 20:59 UTC. This version has been blurred to reduce the distracting effect of radio noise. Click through for more information and other versions.

Okay. So now that I've posted those, how is it possible that the moon visible here as a bright white droplet is a fifth of the size of the asteroid? I'm going to refer you, first, to my explainer on how radar imaging works. A very abbreviated explanation: radar images of asteroids are also called "delay-Doppler" images. The y-axis is "delay" -- how long it took the broadcast radio signal to return to the telescope -- and is directly related to distance to the different parts of the asteroid. The x-axis is "Doppler" -- a measure of how much the radio frequency of the return pulse has been Doppler-shifted, which, in turn, is affected by how fast the thing is rotating. The faster it rotates, the more spread in Doppler.

The delay resolution is 75 meters per pixel. Measure the height of the main asteroid in this image and you'll get about 20 pixels, which is about 1.5 kilometers. Assume the asteroid is roughly spherical, and that translates to a diameter of 3 kilometers. (The NASA release says 2.7 kilometers.) Measure the height of the smaller satellite and you get about 6 pixels, or 450 meters, give or take. (The NASA release says 600 meters. I trust their interpretation of their images more than mine, of course!)

I'm not sure what the Doppler resolution is exactly, but it appears that the main asteroid is rotating relatively quickly (a rotation period of less than four hours, according to the NASA release), while the moon is not rotating nearly as fast. In fact it's very likely the satellite is rotating at exactly the same speed at which it's orbiting the asteroid, maybe a factor of 10 slower than the asteroid's rotation period (according to Alan Harris). That much slower rotation squishes the moon along the Doppler axis, making it appear very skinny compared to the primary. It also concentrates the power of the returned radio signal into those few squished pixels, making it appear much brighter than the primary.

Stay tuned for more cool radar images. They'll be zapping it with Arecibo, too. I learned this week from Lance Benner's talk to the Society for Astronomical Sciences that by virtue of its much larger diameter, Arecibo is much more sensitive than Goldstone, as you would expect. However, Goldstone is capable of transmitting a radio signal with finer resolution than Arecibo, attaining 3.75 meters' resolution in range. And those tricky, tricky radio scientists can actually take advantage of both capabilities simultaneously: they can perform a bistatic radar observation where they zap it from Goldstone (using Goldstone's finer resolution) and receive the signal at Arecibo (using Arecibo's greater sensitivity) to get images five or 6 times more sensitive than Goldstone can manage alone. I'm not sure if they'll be using that particular trick for QE2, though. This asteroid is not passing as close as some do, so that will affect the maximum resolution they can achieve.

As a last bit of fun for this post, here is a time-lapse GoPro animation, shot by Doug Ellison, of the great Goldstone antenna tracking a target, slowly shifting. That shifting that you see is compensating as much for Earth's rotation as it is for any motion of the target.

About 80 minutes of sunset and dish-pointing at DSS-14, the 70-meter Antenna at Goldstone's Mars complex, part of NASA / JPL's Deep Space Network.

Thanks to Daniel Fischer for pointing me to Alan Harris' explanation.

I think it's 1 µs imaging according to the officemates.

Cool! Thanks Emily! I hope you are able to do a final follow up when "the boys & girls" get done playing around with the data so we can see what they see!

A moon around an asteroid is not a surprise! See: http://metaresearch.org/solar%20system/asteroids/near/NEARChallengeOverview.asp

I wonder if we'd had an optical satellite on the other side of it would we have obtained a whole picture?

Emily, according to http://echo.jpl.nasa.gov/asteroids/1998QE2/1998QE2_planning.html they do plan to attempt bistatic observations. Looks like the possible dates are June 6 and 9 (UT).

I guess I don't quite understand how 2D radar imaging can produce such relatively clear images as shown above. Generally speaking, wouldn't you almost always have multiple patches of the asteroid's surface at the same distance and radial velocity, and thus all lumped together at the same x/y position in the radar image? For example, assuming a roughly spherical shape of the asteroid and an axis of rotation perpendicular to the viewing direction, any point on the surface should be overlayed by the point at the same latitude and longitude on the other hemisphere, so the "upper" and "lower" halves of the asteroid would be visualized on top of each other.

Olaf, you are exactly correct. There is an ambiguity in radar images such that features are overlaid. If you look at the other images at echo.jpl.nasa.gov you'll see some where there are clearly two reflectors crossing each other -- those are features in different hemispheres. You can see it very clearly in the Toutatis videos, for instance: http://www.jpl.nasa.gov/video/index.cfm?id=1175

An article i read on this site http://newsmoves.com/ describes how harvesting asteroids will not only be possible but probably a necessity for solar sysyem exploration. How far are we away from that stage? ive seen that we can land a spacecraft on a astoeriod so i think we just need an incentive, like a mountain high asteoriod of solid gold maybe!