This seems to be my week for answering questions in the blog. A frequently-asked question last week was: if asteroid 2012 DA14 is coming so close to Earth, why hasn't anyone taken any pictures of it? The people who ask this question seem surprised not to be seeing photos like this one, of asteroid Ida: 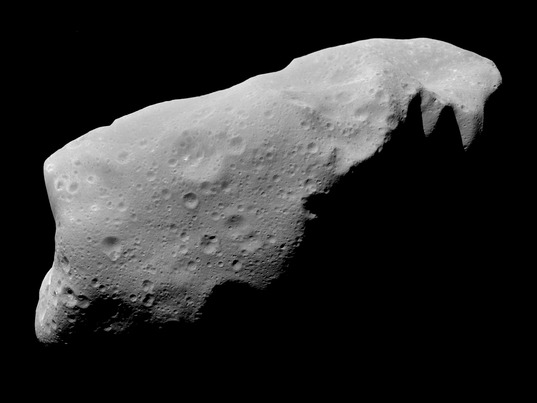 On its way to the Jupiter system, Galileo passed by asteroid 243 Ida, discovering that it had a satellite, now named Dactyl. This is a mosaic of 5 images captured on August 28, 1993, shortly before closest approach. Ida is an S-type asteroid, about 58 by 23 kilometers in size.

Now that 2012 DA14 has whizzed past us, we do finally have some pictures of it, but they still may not satisfy everyone:

This collage of 72 individual radar-generated images of asteroid 2012 DA14 was created using data from the 70-meter Deep Space Network radio antenna at Goldstone, California. The data were collected on the night of February 15 to 16, 2013, after the asteroid had made its closest approach to Earth and was exiting the Earth-Moon system. During the observations, the space rock's distance to Earth increased from 120,000 to 314,000 kilometers.

There's a movie version, looping the images a total of 9 times:

Why can't we get better pictures? Just like with everything else in space, even the "close"-passing asteroids are smaller than they are close. Here's what we learned about the asteroid from the radar images:

We successfully observed 2012 DA14 at Goldstone on February 16, 18, and 19 and obtained images with resolutions as fine as 3.75 meters x 0.0125 Hz. The images from February 16 show the asteroid completing close to one rotation in about eight hours. Even at this fine resolution the asteroid is so small that we were barely able to resolve it. Inspection of the images shows that the bandwidths and visible extents vary by about a factor of two as the asteroid rotates, hinting that the aspect ratio is close to 2:1. If we assume that the visible extents are about 1/2 of the actual extents, which would be true for a sphere, then the implication is that we were seeing an object with dimensions of roughly 40 meters x 20 meters.  Obviously this is very preliminary; we need to look at our data more closely, and ultimately more precise estimates will be require shape modeling.

Ida, which I showed you above, is a large asteroid, about 56 by 21 kilometers across. That is, it's more than a thousand times larger than 2012 DA14. And the photograph wasn't taken from Earth; it was taken by a spacecraft, Galileo, which passed within 2,500 kilometers, and achieved a best resolution of 25 meters per pixel. If Galileo passed exactly as close to 2012 DA14, the little thing would be barely over a pixel in size -- basically not resolved at all. In fact, there's nothing in space that is that small that we have ever seen with a spacecraft. Many of the largest "particles" in Saturn's B ring are the size of 2012 DA14; Cassini will never pass close enough to any of them to be able to resolve them as distinct bodies.

Our "spaceship Earth" passed ten times farther from 2012 DA14 than Galileo did from Ida, at about 27,000 kilometers. So that reduces our ability to see 2012 DA14 by yet another factor of ten. Earth-based telescopes have better resolving power than Galileo, but not by more than a factor of two, thanks to the blurring effects of our atmosphere. And that's even if they can track the fast-moving thing, which only very few can; and the more you zoom in, the harder it is to track. Only a wider view -- and lower resolution -- lets you be sure you can see it passing through your field of view.

To get to the point: there was no hope of getting photographs resolving details on 2012 DA14, no matter how close it got.

The only way to "see" details on close-passing asteroids is with radar. Radar imaging works differently from photography. I posted a long explainer here, but here's the most important facts. The spatial resolving power of a radio telescope is unrelated to the distance from an object; the radio telescope "sees" features on asteroids by broadcasting a radio wave at the asteroid and then timing how long it takes the reflected waves to get back and looking at the Doppler shift of those reflected waves. The sizes of those time delays and Doppler shifts are not dependent upon the distance from the radio telescope. The time delay depends roughly upon the size of the asteroid (it takes slightly longer for the signal to come back from a farther-away bit of the asteroid than from a close bit; if you assume the asteroid is spherical, the difference in time between the first and last arriving echo is half the diameter of the asteroid). And the Doppler shift depends upon how fast the asteroid is spinning (there's more Doppler shift for a faster-spinning asteroid). The only thing that distance affects is the strength of the signal; if something is too far away, the radio telescope isn't able to pick the signal out of background noise.

Radio scientists can improve the signal-to-noise ratio by binning things together, which is what reduces their spatial resolution for faraway objects. But a spatial resolution of 3.75 meters is way, way, way better than any optical instrument can get. Even spacecraft rarely achieve resolutions like that at asteroids, unless (like Hayabusa and NEAR) they actually land. So for any asteroids that we cannot visit with spacecraft -- which is practically all of them -- our best bet to learn about their size and shape is radar imaging. We need more spacecraft to examine these diverse bodies; but we also need to continue to support asteroid observation activities at radio facilities like Goldstone and Arecibo.

Emily thanks for the Goldstone images and the explanation of how it works, which is fascinating But I still don't understand why no optical imaging was attempted. At a resolution of 0.1 arc sec Hubble would be able to resolve down to 8m at 17,000km, not a detailed image of a 50m object but enough to get an idea of the shape and, from a series of images, the spin. The best ground based telescopes such as the LBT now boast optical resolutions twice as good as hubble which would make them comparable with the Goldstone images. I guess I am missing something. Were these telescopes unable to track the asteroid, or did they just have more important work to do?

Hi Anon, Great Question! Yes, you are right; it's a matter of tracking. This little guy was coming by so fast (and pretty darn close) that it would be like trying to watch an airplane fly over your home with a small telescope. It's a lot easier if the airplane is far away and either coming towards you or going away from you because it's apparent motion (motion against the sky) is a lot smaller. At it's closest approach over your home, it would be the hardest to track do to it's fast apparent motion. So if you think about it, this apparent motion is also changing all the time as it whizzes by, which make it even harder to keep the telescope on the object. Of course, we would most likely be using our own "computer" to do this with our telescope: our brain. I think that's why a good pair binoculars, and a knowledge of the sky, was recommended for people that wanted to try and see it for themselves. Also, thanks to Emily's explanation of Radar (thanks Emily!), you don't have to be as accurate with tracking to get a pretty amazing result. If you've ever seen good a photo of the ISS from earth, you are seeing the results of some good tracking!!! 2012 DA-14 is less than half the size of the ISS and was roughly 75 times farther at it's closest approach.