"Sand" means something different to me than it does to you, probably

I had one of those "A-ha" moments last week where I suddenly realized that I had run afoul of a common problem in science communication: when the words I'm using mean something different to me than they do to almost everyone I'm talking to. The confusing word of the week: "sand."

How can the word "sand" possibly be confusing? Well, the situation is a lot like the one with the word "rock," which I talked about in this blog entry. Just as with "rock," for geologists, "sand" has a definition that is far more precise than the way that the word is commonly used in conversation.

Geologist Chester K. Wentworth defined "sand" in a publication in 1922, along with "gravel," "silt," and "mud." Sand-sized particles range in size from 63 microns to 2 millimeters. Gravel is anything larger than that; silt and mud are finer. When we think about sand, we usually picture quartz sand, because that's what most sand is made of on Earth. But the term "sand" does not specify composition, it only specifies grain size. So you can have gypsum sand like at White Sands National Monument, or olivine sand on certain Hawaiian beaches, or any other composition where mechanical and chemical weathering bust rock of any composition into sand-sized particles.

The canonical definition of sediment grain sizes as defined by geologist Chester K. Wentworth in a 1922 article in The Journal of Geology: "A Scale of Grade and Class Terms for Clastic Sediments".

Sand on Mars is much more likely to be made of olivine than it is on Earth, because olivine is much more abundant at Mars' surface and Earth's wet envrioment chemically alters olivine into other minerals.

Now, while beach sand can be pretty homogeneous in size, most rocks and soils contain more than one size of sediment grain. To describe the grain size in a rock or sediment, then, you need to use a mix of these terms. According to the United States Geologic Survey, two systems defining how you describe the grain size of a rock or sediment are now in common use. One of them was defined by Francis Parker Shepard, the other by Robert L. Folk.

Both the Shepard and Folk classification systems involve a graphical tool beloved by geologists: a ternary diagram. In a ternary diagram, three endmembers are represented at the corners of a triangle, and you represent the proportion of those three endmembers in something by plotting a point somewhere inside the triangle. A pure sand would plot at the "sand" corner, but if there's some clay in your sand but not very much silt, it would plot in the "clayey sand" region.  If you're not quite sure you get how a ternary diagram works, here's an amusing exploration of the phase equilibria of pie crust that employs a ternary diagram. (Aside: I looked really hard yesterday to find funny ternary diagrams, and that's the best one I could find, thanks to a tip from Patrick "Poikiloblastic" Donohue. I am sure there are more very silly or funny ternary diagrams among some geo prof's slides somewhere. I'd love to see more examples.) 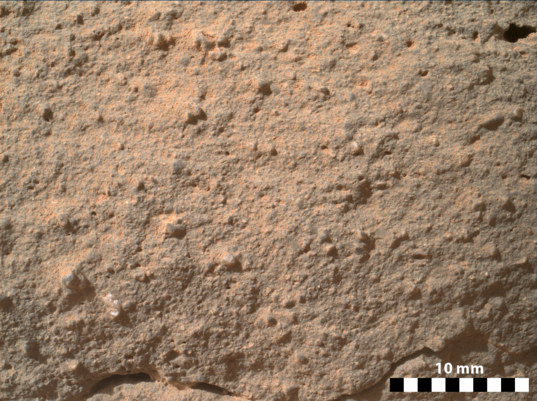 MAHLI view of "Gillespie Lake," a coarse sandstone on the edge of Yellowknife Bay, sol 132

Curiosity held its MAHLI camera within 3 centimeters of a ledge on sol 132 to examine its grains up close. The investigation revealed the rock to be a coarse sandstone, made up of cemented grains of a range of sizes. The biggest grains at lower left are about 2 millimeters long, which is larger than sand; technically, they are classified as "granules." The whole view is about 4.3 centimeters wide; at full resolution, it is about 26.1 microns per pixel.

Fine, you might be saying, but what's the point of all this hair-splitting? It's a good question. The answer is that grain size is an extremely important clue to the history of a rock. It tells you about how the rock's sediment formed in the first place, and it influences what can have happened to the rock since it formed.

Here's an expanded version of the Wentworth (1922) classification scheme that makes some of this a bit more clear. I particularly want to draw your attention to the last two columns, titled "Threshold velocity for traction." It tells you how fast a stream has to be moving to shift grains of that size. I am not enough of a sedimentologist to know the difference between the two estimates, but the point is that grain size serves as a proxy for the speed of the flowing fluid that transported the sediment in the first place. Flow rate enters into estimates of flow volume. And now you're measuring the size of little sand grains and using them to paint a picture of what kinds of things water was doing on Mars back when this rock first formed. (Some of you may be asking whether these numbers hold true for Mars, where the gravity is lower. I would think that it'd be easier to get sediment moving on Mars, but that's just a guess. I didn't take a sedimentology class in college. I am sure that settling velocity would be lower on Mars than on Earth.)

The canonical definition of sediment grain sizes as defined by geologist Chester K. Wentworth in a 1922 article in The Journal of Geology: "A Scale of Grade and Class Terms for Clastic Sediments".

The degree to which the grain size of a rock is uniform is also a really important clue to its sedimentary history. As a rule of thumb, a poorly sorted sediment (one in which the grain sizes vary wildly) has not been moved very far from its source; it's some kind of mass movement, a sudden episode like a landslide or a flood in which a bunch of sediment was grabbed all at once from a source, carried quickly to a new place, and then dropped.

But there are lots of natural processes that can sort out sediment by size, and most of these are controlled by the local speed of water flow. Imagine a mountain stream; it moves fast (and is helped along in moving large cobbles by gravity), so you see a stream bottom made of large rocks and very little sediment. Downstream, where the slope is less and flow slower, the stream bottom can be sandy, or even silty. When large rivers overflow their banks and debouch onto broad, flat floodplains, the water suddenly slows down. It can't carry boulders or even, usually, much sand far from the channel; instead, everything that was flooded is covered with mud, which, if you read the Wentworth diagram, has a grain size under 3.9 micrometers. The same thing happens when a mountain stream exits a valley onto an alluvial plain. All the big stuff gets dumped right next to the mountain, but the finer sediment gets carried farther. That makes a classic progression in alluvial fan deposits, where it's coarser-grained near the valley wall and progressively finer grained as you travel down the widening fan.

One last note about grain size and Curiosity. The MAHLI camera -- that's the hand-lens imager on the end of the arm -- can achieve a maximum pixel resolution of 14 micrometers per pixel. when it's held at its closest possible distance of 2.1 centimeters away from a rock. But it can't really see a grain in a rock if it's only one pixel across; you need three or four pixels to tell one grain from another. Look at the Wentworth scale, and you'll note that if MAHLI can see grains in the rock at its very closest distance, the grains must be at least 50 or 60 microns across. The boundary between silt and sand is at 63 microns. So where MAHLI sees grains, you're probably looking at a sandstone; if MAHLI can't see individual grains, the grains are essentially silt-sized or smaller.

So next time you hear any geologist talking about "sand" or "silt," now you know what we mean!

Unfortunately, there is even more confusion with some geologists, those who work in the engineering and environmental fields (like groundwater and contaminant investigations) where the "Unified Soil Classification System" or USCS is routinely used for sediment classification (yes, it is used for sediments, not just "soils" which has a broader definition in this area). Here is the USCS breakdown for grain sizes: fine grained sand is 0.074mm (200 mesh) to 0.42mm (40 mesh) (there is no "very fine-grained sand"); medium-grained sand is 0.42mm (40 mesh) to 2mm (10 mesh) and coarse-grained sand is 2mm to 4.76mm (4 mesh) (Yikes!). This sometimes creates havoc when you have new workers fresh out of college, who have only heard about Wentworth. I know it gives me headaches (and there are other problematic aspects of the USCS scheme when it comes to logging). Obviously, this is of no concern for the Mission or, frankly , many other academic pursuits, but it's something people should be aware of when it comes to communicating between groups. Regardless of my comment - great write-up!

The threshold velocity should be interpreted with much care, imho, because besides gravity the density quotient of the liquid and the grain plays a role as well as the viscosity (eta) of the liquid. Especially on Mars we should not assume pure water as the liquid without further investigation; solved sulfates may increase density and viscosity and therefore enable the liquid to transport larger grains than pure water of the same speed could do.