I have to start this blog entry with an apology. I recently recorded a video in which I talked about Curiosity's science instruments while standing in front of a model of the rover at JPL. I think it came out pretty well, but there's one big problem. I had counted Curiosity's cameras and came up with 16. The actual number is 17. I missed the one that will be most crucial on the day of landing: the Mars Descent Imager, or MARDI.

So, by way of apology to Mike Malin and Mike Caplinger and Ken Edgett and everyone else at Malin Space Science Systems (MSSS) who built this cool instrument, let me tell you all about it and how it is hopefully going to be responsible for one of the coolest videos to come out of the Curiosity mission as well as for images of Jupiter. The following is based upon a 2009 Lunar and Planetary Science Conference abstract about MARDI (PDF), with some extra bits of information from the press kit and personal communications with Malin and Edgett. (Errors are, of course, mine.)

First, I'll get the basic stats out of the way, since I know I will be referring to this article in the future in order to remind myself of them: 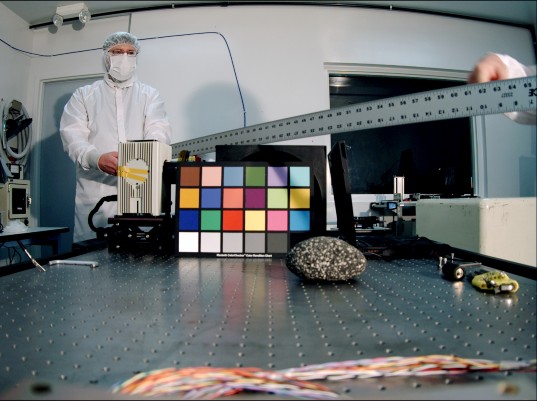 This image was acquired in the Malin Space Science Systems cleanroom during MARDI calibration testing in June 2008. It shows the MARDI Deputy Principal Investigator, Ken Edgett, holding a six-foot metal ruler that was used as a depth of field test target.

Every science instrument begins with an objective or goal. The MARDI investigation has two related objectives: (1) "to determine where exactly the MSL vehicle has landed" and (2) "to provide a geologic and engineering-geologic framework of the landing site for early operations." Imagine if you had dropped out of the sky on to an alien planet with your eyes shut. Once the dust cleared and you could open your eyes, your first question would probably be "Where am I?" MARDI will answer that question.

To that end, MARDI will do something like what another instrument called DIMES did for the Mars Exploration Rovers: take a nested series of images between the time that the heat shield is jettisoned and landing. Unlike DIMES, though, MARDI has no real-time role in the landing. Three DIMES images were used by Spirit and Opportunity to estimate the horizontal velocity of the spacecraft during landing. Curiosity uses inertial measurement units to do that (I think). The fact that MARDI didn't have this sort of role, where it could save the rover's life during landing, explains how it could have been canceled in 2007. I'll let Malin and his coauthors tell this story:

With the Mastcam and MAHLI [the other science cameras provided by Malin to the mission], MARDI underwent a Preliminary Design Review in February 2006, and a Critical Design Review in February 2007. Although the design was mature and all of the parts were on hand, in September 2007, NASA Associate Administrator [Alan] Stern directed (without consultation with the PI) that the MARDI be descoped from the MSL payload for a cost savings of less than $100,000. Using its own resources, MSSS completed the instrument and NASA agreed to re-instate the instrument for flight, allocating funds designated for MSSS participation in the Phoenix mission to cover the JPL costs to integrate the camera with the rover.

It's a good thing MARDI is back on the mission, because it will do so much more than DIMES did. DIMES took a total of three black-and-white pictures. MARDI will take hundreds of color images, which will, in the short term, help the rover team figure out where the rover landed. In the long term, it'll provide us with an HD video, yes, a video, of the rover's descent to Mars.

MARDI is located on the front left side of the rover and pointed downward. Its detector is a 1600 by 1200 Kodak CCD covered with filter microlenses arranged in a Bayer pattern for color imaging. As far as I know, MARDI (and Mastcam and MAHLI, which use the same detectors) represents only the second time that a Bayer-filtered color camera has flown to space; the first was the (significantly less fancy) Visual Monitoring Camera on Mars Express. You can see the gold box of the MARDI camera head just above the black tube of Curiosity's front left rocker in this photo I took while in the clean room at JPL. MARDI will begin operating partway through the parachute phase of the descent. (For a refresher on this, you could go read part 2 of my 3-part landing article.)  About 10 seconds before heat shield separation, it will receive a "start imaging" command from the rover and thereafter operate autonomously.  Once the parachute has decelerated Curiosity to subsonic speeds, the spacecraft will drop its heatshield. As the Sun first gleams through the crack separating the heatshield and aeroshell, MARDI's first images will be of a white swatch of beta cloth attached to the inside surface of the heatshield, providing a white balance for the camera. The press kit describes what the images will look like in some detail:

The full video...will begin with a glimpse of the heat shield falling away from beneath the rover. The first views of the ground will cover an area several kilometers across.  Successive frames taken as the vehicle descends will close in and cover successively smaller areas. The video will likely nod up and down to fairly large angles owing to parachute-induced oscillations. Its roll clockwise and counterclockwise will be smaller, as thrusters on the descent stage control that motion. When the parachute is jettisoned, the video will show large angular motions as the descent vehicle maneuvers to avoid re-contacting the back shell and parachute. Rocket engine vibration may also be seen. [According to Malin et al., these will "be seen" in the form of image blur.] A few seconds before landing, the rover will be lowered on tethers beneath the descent stage, and the video will show the relatively slow approach to the surface. The final frames, after landing, will cover a bath-towel-size patch of ground under the front-left corner of the rover.

Malin pointed out to me in an email that I had omitted one of the more dramatic elements of the descent phase from my writeup, the "divert maneuver." This happens just after the rover has dropped out of the aeroshell and fired up its engines. It tilts sharply and flies to one side of its former trajectory for a distance of hundreds of meters before righting itself, in order to make sure it is well clear of the aeroshell and parachute. This will, to put it mildly, be noticeable in the MARDI video.

The length of the MARDI video depends upon the length of the descent phase, whose duration is highly uncertain, especially the parachute part, which could take anywhere from 55 to 210 seconds. Powered descent takes 50 to 60 seconds, and the skycrane about 15 seconds.

At first, only a few full-size frames will be returned, a nested set of images like those from DIMES (only there will be more of them, and in color), which the team will compare to HiRISE images to map the rover's descent and locate its landing site. MARDI's images will have better resolution than HiRISE from an altitude of about 400 meters; they should allow the team to determine where the rover is within our existing HiRISE images to sub-pixel resolution. One planning challenge of the MARDI investigation was figuring out what subset of the images to return at full resolution right after landing; in the first hours after the landing, Curiosity will return a subset of images that had to be selected before it knew how long the landing took, so the selected subset of images has to cover the entire range of possible descent durations. Pairs of MARDI images should also enable the production of highly detailed digital elevation models of the ground in the immediate vicinity of the rover, useful in the first few weeks of mission operations.

Once the video is on the ground -- in thumbnail size within a few days, and in full size at some future date depending on the demands on available bandwidth by other instruments -- it will serve as a very precise check on the rover's own sense of its descent motion using its inertial measurement unit.

MARDI can even be used after Curiosity is on the ground. It won't quite be in focus -- at distances shorter than 2 meters, its images start to blur, and it'll only be 70 centimeters off the ground after landing -- but it'll effectively resolve as much detail as it could see from a 2-meter altitude, where it will have had 1.5-millimeter pixel scale. MARDI images can show the ground passing by under the rover, which is cool in itself but which also has science and engineering uses. For instance, its images can be used for visual odometry (in which the rover compares successive images to determine its travel distance between drives), and occasional images will record variation in soils along long traverses.

Okay, so Curiosity has a death ray AND a force field. Now all it needs is a transporter beam!

Sorry, comment put on wrong blog entry. Feel free to delete both of these.

Second paragraph mentions images of Jupiter?? Is this a typo?

Thanks you for the excellent article. The uses of the images coming from a nadir looking camera catch my attention. For example during the descent phase they "should also enable the production of highly detailed digital elevation models of the ground in the immediate vicinity of the rover". How could this can be done? Obviously you can match fetaures from image pairs (extracted with scale invariant feature extractors to avoid the scale changing during descent ) but how are you going to give scale the terrain model? Also the geometry of the image position centers (ideally in the same vertical during descent) are not very good to achieve a depth precision... It would be interesting to hear more about the way to do this Thanks again