Today's press briefing covered Curiosity's sol 3, the third full day of operations on Mars. (Landing was sol 0; different missions have used different conventions for numbering landing day.) Everything on sol 2 and 3 has gone essentially flawlessly, mission manager Mike Watkins reported. And not just on Mars; on Earth, with the function of the team, too. Which, considering the size of this team and the short planning schedule they have each day, is quite an accomplishment. Of course, it helps that most of their sequences for the first few weeks are essentially pre-planned.

The big thing that everyone was looking forward to today was a report on how the Mastcam panorama did. To briefly review, Mastcam is the main color science camera on top of the mast; there are two cameras, one a medium-angle view (Mastcam-34) and one a zoom (Mastcam-100). Up on Mars, Mastcam successfully acquired the entire panorama, 130 images. It returned thumbnail versions of all of those images to Earth, 144-pixel previews of what will eventually be 1200-pixel images. Mike Malin presented a panorama made from those thumbnails, and it's very pretty, but only a preview of what's to come.

Curiosity acquired its first color panorama of its surroundings on sol 3. This preliminary version was made from low-resolution thumbnails of the images returned to Earth the same afternoon.

I figured that as soon as I got back to my computer after the briefing, there would be a stunning panorama on unmannedspaceflight.com consisting of this color overlaid on the sharper Navcam panorama. There wasn't, though, and it turns out that the two panoramas have been difficult to match because they used different projections. (Any time you represent the three-dimensional world in two-dimensional space, you're warping everything in one kind of projection or another, and there is a very wide variety of ways you can do that.) So there wasn't anything available. I'm a lesser image processor than some of the geniuses over there, so I didn't even attempt the full panorama. But I thought I could give a try to a little piece of it: that geological promised land on the right-hand flank of Gale's central mountain. The result isn't perfect by a long shot, but I'm pretty pleased anyway. 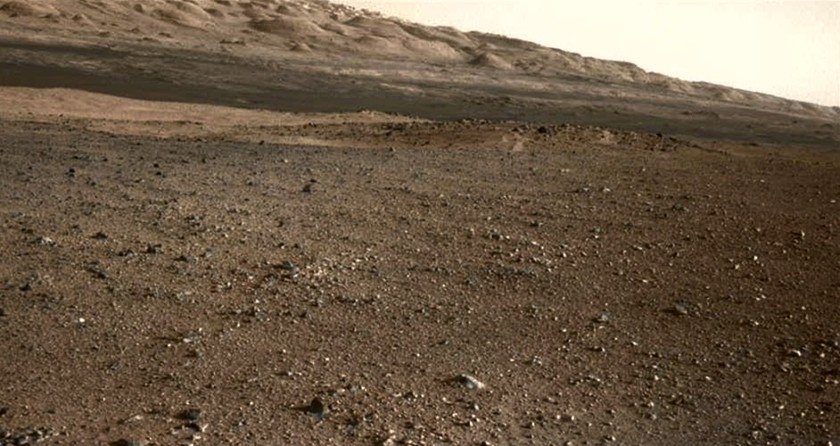 An attempt to colorize part of a Navcam image of the eastern flank of Aeolis Mons with the Mastcam thumbnail color panorama released on sol 3.

During tonight and tomorrow's communications passes, sol 4, they should get a few of the full-resolution frames down from Mars. But only 10 or 20 will make it down before they begin the big flight software upgrade on sol 5. That effort will take at least 4 sols, and no science data will be returned during that time. So it'll be some time -- at least a week, more like two -- before the whole thing is available in full resolution. Even then, it won't include the top of the mountain. The panorama was planned and sequenced before the landing, so its pointing was pretty much random. Malin said that in the coming couple of weeks they have other preplanned image mosaics but that they will be able to adjust some parameters, shifting pointing slightly to better frame the pretty vistas in the distance, and the intriguing geology they contain.

One reason that the communications have been slow is that they are still limited to pretty low data rates; the maximum they have achieved so far is 256kbps. Within the next week or two, they should be able to move in to the data transmission mode with Mars Reconnaissance Orbiter that will allow rates of up to 2 Mbps. One thing I hadn't understood until I chatted with Watkins this morning was that the 2 Mbps is a maximum achievable during a single pass in which they can actually use an adaptive data rate, lower at the beginning and end of the pass when the geometry is not as good, and highest when the orbiter is most overhead. That's pretty spiffy.

I asked Malin during the press briefing if it was true -- as is my impression -- that this is a more colorful landing site than any previous one. He said he agreed with that, though he was cautious about interpreting that. Different colors don't necessarily mean different rocks. All over Mars we have red dust, black sand, tan rocks, and those are the colors we're seeing here, too. Different appearance may thus have as much to do with texture as with composition. But Dawn Sumner, also on the panel, pointed out that we know there is diverse geology here; that's why we came! And she's going to begin to try to use the MARDI color data on their HiRISE geologic maps to see how color correlates with geology.

I'll probably do one more Curiosity-related post today, but I'm taking tomorrow off. My older daughter starts school next week, and I want to take her to the beach! I've asked Jason Davis to cover any news that comes out of tomorrow's briefing, which they told us would feature the EDL team reconstructing what happened on landing day.

Thanks for all of your hard work on this Emily. I am curious to know how worried the project engineers and scientists are about their rover being blasted by a shower of ~1 cm gravel during landing. The gravel will no doubt slide and roll around on the surface of the rover once she starts moving uphill etc. Are their any science instruments or moving joints that could be negatively impacted, blocked or jammed?

Emily, please, by all means, take tomorrow off! You are doing a great job, and you deserve a day off with your daughter. Sounds like we might all get the weekend off during the software upgrade...

Say, Emily - I saw a VR panorama from Opportunity at Greely Haven today and the rocks and soil in some places are decidedly blue-tinted. Is that due to a specific element or is it due to false-coloring? Thanks! Guy

i totally agree with your opinion that this is the most colourful landing site.... few questions 1.> where are the thumbnails posted on NASA /JPL site? there is no link for sol 3 activities/images on JPL's MSL site. 2.> while watching those full-resolution MARDI images i thought i am seeing some colored patches in surface soil so i boosted the saturation of all full-resolution MARDI images which lead me to observe a colored patches in all of those images more towards the end of landing. so can u pls confirmed that with mr malin?

Emily it is so nice to hear someone intelligent during the press conferences. You and Irene Klotz are the best of the press corp. At the other end of the spectrum are the clueless types in the mainstream media; Marc Kaufman of the Washington has to be the worst. He does not seem to have any grasp of the science and all he wants to know about are problems. He is dying to find a technical or planning issue; it is disgusting. If you want to understand scientific illiteracy in this country you could start with Marc Kaufman types in the media.

Judging by some some old (Viking-era) maps of Mars I have lying around, Gale crater seems to be at the edge between lighter and darker albedo regions of Mars. I wonder if that contributes to the greater variability of surface colors.

I'm wondering if you/they do any color adjustment/compensation for angle of incidence of the camera view relative to the surface, and/or other compensations for different lighting conditions (position of sun, detected wx conditions, etc). Also to compare to the HiRISE and Odyssey data. thank/you. And I concur, Emily, it is really great to be able to get information from someone who knows her stuff and doen't feel the need to dumb-down, while at the same time making things very clear.

Sidenote. I announced to my wife that everything was nominal with Curiosity and she said, "That's it? That doesn't sound very inspiring" Her understanding of the definition of nominal was: "trifling, insignificant." I had to look at several sources before I could find the definition that I had always had in my head: "being according to plan, satisfactory." This must be a space-age definition, huh? It even had this modern usage example: "everything was nominal during the launch."

Hi Emily...2 questions. The first is why, in some of these images, does the horizon seem to be at an angle? Second, some of the images have been "white balanced" they asy in order to make the colors look more like what scientists would see on Earth. The question is...are the white balanced colors how a person would see the landscape on mars, or how -- if the terrain were transplanted to Earth -- how it would look here on Earth. In other words, if I were standing on Mars, which colors would I see?

First, congratulations for the landing. The pictures coming in are good to see and I look forward to seeing many more!

Lots of questions! In general, color is *extremely* subjective. The white-balance thing corrects for the color of the light, which is yellowish on Mars. So it shows you what Mars would look like under Earth illumination conditions, which is helpful if you're drawing comparisons between rocks studied on Earth and on Mars. No human's ever been to Mars, but I suspect that you'd adjust to the yellowish light. For most images, there's no "real" color, but the relative coloration of things -- rocks tend to be bluer, soil redder, sky orangeish -- are true.