Curiosity's first color panoramic view of her landing site cut off the top of Gale's central mountain. It was taken on sol 3, the third full day of the mission, while the rover was still mostly executing pre-canned commands. On sol 13 (August 19), they shot several images to fill in the missing bits of the mountain, and yesterday the full-resolution versions of those images were finally returned to Earth.

Damien Bouic assembled them into a panorama, but I still found the jagged black upper border distracting. I asked him to fill in the sky to make the panoramic view more pleasing. Although part of the sky is artificial, I like this version a lot better. For me, this will be the definitive version of this mosaic, the one worth printing.

Curiosity captured most of the data used to compose this 360-degree panoramic view on sol 3; the peak of the mountain wasn't imaged until sol 13. This version of the image has an artificial sky added to increase the height of the image.

There were some other fun images returned yesterday. My favorite was this one, one of three Mastcam views of some of the hardware on the rover's deck. This one is the inlet cover for the Chemin instrument. Click to enlarge it and look at the bundles of wires. From a distance, it looks like they are bundled with zip ties. Examine it at Mastcam resolution, though, and it becomes clear that they are actually tied together. With a kind of woven cord. With knots. Knots. It's funny to think that with all the advanced technology on this rover, the best method to solve this one little engineering problem, bundling wires together, uses a technology that predates the rise of Homo sapiens, and which is even used by birds. 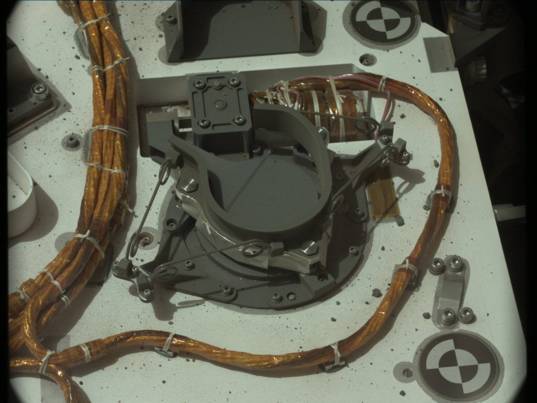 This is an excellent pan! I love the closeup of the deck and all the fine detail. Thanks for pointing it out. I'm wondering how much the dust and rocks will shift as they start driving - I found an image on Sol 16 (after the first maneuvers, I think) that is a little lower resolution than this one, but I can't see any motion in the rocks so far. Have you been assembling some stereo images from the new ones downlinked yet?

I hope those bindings are highly UV-resistant. Anyway I had a question about the ChemCam RMI photos. Tell me I am wrong but it looks like thos photos display spherical aberration! What am I missing? http://www.msl-chemcam.com/blog/wp-content/uploads/2012/08/RMI-thrust-images.jpg

That looks like a big dust catcher to me. How will they handle that problem?

fthurber: The RMI optics are of the Schmidt type. The swirling look to the edge of those images is not spherical aberration, it is distortion caused by the strongly curved focal plane of the Schmidt design lens. The lens on ChemCam is shared with the laser and probably not idealised for the RMI, but it is nicely sharp in the target area, which is what it's there for. Makes for a nice "Petzval portrait lens" effect. ^_^

Thanks Brian! That was just what I was hoping to hear; it is nice to know that it was by design, not by accident. As you know, NASA has a bad track record with spherical aberration (Hubble and a JPL probe, the name of which escapes me now), but the ChemCam crew seems very very capable.

I can't describe with words the sense of awe and wonder of seeing this panorama, and the whole achievement of the mission!

Emily, you're quite right to feel wonder that knots are both so ancient and still so useful. I am both a space exploration enthusiast and member of the International Guild of Knot Tyers. I had been waiting for quality images of the knots to come back and was excited when I saw these raw MastCam images a couple days ago. I produced a little write-up on the Guild's forum about the knots visible on Curiosity's deck: http://igkt.net/sm/index.php?topic=4028

So Brian I have to assume that the mirror shape is designed to be optimal for recording spectra and the telephoto aspect is just a bonus. The Mastcam 100 might do a better job here. Anyway I was a little disappointed that ChemCam did not find any hydrated minerals in the Goulburn Scour; the floor of Gale crater certainly looks like it was formed by aqueous deposits, but on Mars looks can be deceiving [Gusev crater certainly looked aqueous, but turned out to be "Basalt Hell".] It was encouraging that DAN did show some hydrated minerals further down and I think that there was another DAN run over the scour last night. The latest ChemCam news seems more encouraging; the raster showed different compostions but they are not saying what just yet. Could they have detected a hydrated mineral that acted as a glue for the composites?