Book Review: Atlas of the Galilean Satellites, by Paul Schenk

Not many subjects remain for which it is possible to assemble everything that we know about it in one book. Even for those subjects for which our knowledge is limited, knowledge seems always to be expanding exponentially. This is not true, however, for the Galilean satellites of Jupiter. They were discovered four centuries ago, first visited four decades ago, last visited one decade ago, and not likely to be studied in situ for at least another decade. So it is presently possible for someone to sit down, take stock of all the available data, and produce a compendium of every image we have of the surfaces of the moons Io, Europa, Ganymede, and Callisto. Fortunately for the rest of us, planetary scientist and deep-sea diver Paul Schenk was crazy enough to take up that task. This book will very likely be the last word in the mapping of the Galilean satellites until we finally get another flagship mission up there to study them again.

Atlas of the Galilean Satellites

It's called an "Atlas" and it is certainly chock-full of maps but it's much more than that. The text that Paul has written is both informative and funny, replete with mentions of really, really obscure pop culture references to Jupiter's moons. He not only knows his stuff about the moons, he was involved in all of the missions that explored them; he began his academic life as a student intern at JPL during the Voyager encounters with Jupiter, and has been studying the surfaces and the shapes of the solar system's icy moons ever since.

Paul's dry and occasionally dark sense of humor was often required during some of the more challenging episodes in the history of icy moon exploration. He laments what might have been, had Galileo's high-gain antenna functioned properly. But in this book he wrings every last drop out of what data there is. There are global maps aplenty. There are hundreds of local maps, in which Galileo's precious strips of high-resolution data are placed into local context (onto lower-resolution base maps) and then in regional context (the base maps' locations are outlined on mini quadrangle maps). Wherever there is Galileo NIMS infrared data (sadly, there isn't much), his maps place that into context as well. Every single one of the maps contains a caption that identifies the circumstances and the significance of each precious image. For instance, take the view of Thera Macula that I posted in yesterday's blog entry about "lakes" under Europa's chaos: 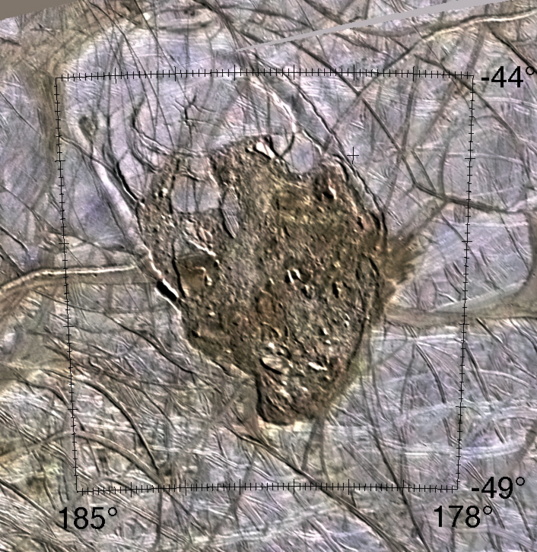 A view of Thera Macula on Europa, Plate Je13.4.2 from Paul Schenk's Atlas of the Galilean Satellites.
Encounter: Galileo E17
Resolution: 225 meters/pixel
Orthographic projection
Map scale [in book]: 1 cm = 29.5 km
This extract from the regional mapping mosaic (Plate Je9.9) shows that Thera Macula looks much like other chaos, including Conamara Chaos (Plate Je9.3). The most interesting feature is not the dark chaos but the disturbed areas to the north. Two subtle arcuate depressions extend northeast from the dark spot, and together these form a distinctive oval feature. This depression is also fractured and blocks of ridged plains have broken off from the northern edge, indicating that his oval extension is or was in the process of breaking apart. The oval shape and nature of the breakup is one of the strongest pieces of evidence in support of a diapiric origin for chaos.


There are wonderful appendices. A 20-page Gazetteer identifies every image containing named features. Want to see all images of Doh crater on Ganymede? It shows up on two plates in the book. Another appendix provides index maps of all high-resolution images, so you can see where are the tiny areas seen by Galileo (and, less often, the Voyagers) in sharpest detail.

One cosmetic issue to mention: there was "some anomaly in the gluing process in some copies" of the book, causing the binding to fail and some pages to come apart. The publisher said they removed flawed copies but they're clearly still out there because I got one. I don't really mind -- in fact, it helps the book lie perfectly flat while I study it -- so I won't complain to the publisher, but if your copy will see heavy use and you get a badly glued one, contact directcustserve@cup.cam.ac.uk and they'll take care of the problem.