Last Tuesday at the Division of Planetary Sciences meeting Bruno Sicardy presented the results of his research group's observations of a stellar occultation by Eris. Stellar occultations are the main tool that astronomers have at their disposal to discover the physical properties of bodies too small and distant to resolve. Properties like diameter, albedo, and (if a mass can be determined by timing the orbit of a moon) density can all be determined by precisely measuring how long it takes for a distant body to pass completely in front of an even more distant star, as long as the occultation is observed by at least two ground stations.

On November 6, 2010, the dwarf planet Eris passed in front of a very faint star, causing its light to wink out briefly.

On November 6, 2010, Eris passed in front of a very faint star (visual magnitude 17.1). Two telescopes in Chile, one at San Pedro de Atacama and one at La Silla, detected the winking off and on of the star. These two occultations were all that was needed for Sicardy's team to determine that Eris appears to be spherical (or very nearly so), and that its diameter is 2326 ± 12 kilometers. Although this is consistent with previous measurements of its diameter using Hubble Space Telescope images, it is at the smaller end of the previously estimated size.

It's also on the smaller end of the possible size range reported for Pluto. So who's bigger? At the conference, Sicardy said "It could be smaller, it could be larger; basically, it is a twin." They are a bit different inside -- Eris is 27% more massive than Pluto, so must contain more rock -- but diameter-wise, they're the same. Yet Eris and Pluto currently look very different, because Pluto is close enough to the Sun (at 30 AU) to support a thin atmosphere with a pressure of approximately 10 microbars, while Eris is so far away (at 90 AU) that it does not. Specifically, Sicardy calculated from the occultation data that if it has an atmosphere, it has a density no greater than one nanobar - less than a ten-thousandth of the pressure of Pluto's.

But this might not always have been (or will be) true. Eris' unexpectedly small diameter but surprising brightness implies, Sicardy said, that it is possibly the second-brightest surface known in the solar system, after Enceladus; its albedo is very nearly 1.0. This is even brighter than freshly fallen snow (albedo 0.8) and way brighter than water ice clouds (0.55). Sicardy speculated that what we are seeing on Eris is a collapsed atmosphere -- the final frost on a deeply frozen world. In time, when Eris approaches its perihelion near 40 AU, its atmosphere will unfreeze and it will really be a twin to Pluto. Returning to the diameter question, Sicardy said, "If you take into account Pluto's atmosphere, it is clearly bigger. In a century or two it will be reversed." 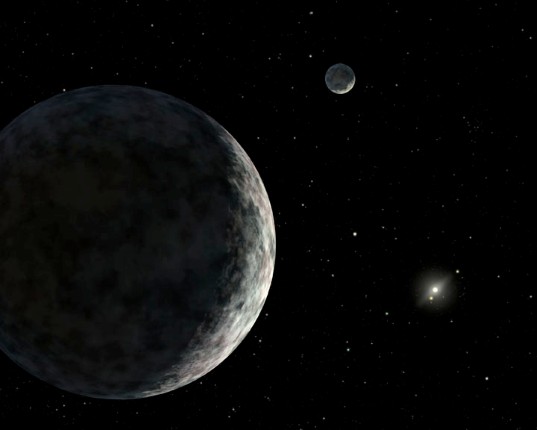 Artist's depiction of Eris and its moon, Dysnomia

I didn't write about these interesting results before because Sicardy asked people not to. More specifically, he said that the work had been accepted for publication in the journal Nature, and that Nature had told him he could present the results at DPS only if he stated to the audience that they were under embargo and could not be reported on. He repeated this at the end of his talk. He was wrong, as it turns out; it was completely unnecessary to impose such restrictions.

This is an excellent example of the stifling effect that embargoes, and especially the Ingelfinger Rule, can have on the public discussion of science. Some of you might be wondering what an embargo is exactly, and I would guess that most of you don't know what the Ingelfinger Rule is, so this seems like a good time to explain them both. Actually, I'm going to let Ivan Oransky do most of the explaining. Oransky pens a blog titled Embargo Watch.

First, what is an embargo? In the inaugural post of his blog, Oransky said: "A lot of journals, using services such as Eurekalert.org, release material to journalists before it's officially published. Reporters agree not to publish anything based on those studies until that date, and in return they get more time to read the studies and obtain comments."

Publicly, journals state that they issue material under embargo in order to help journalists and improve the quality of reporting on scientific findings. In practice, what embargoes wind up doing is cause many news outlets to suddenly release essentially the same story on the same article at the same time, the moment the embargo is lifted. Everyone seems afraid be the outlet not reporting on the embargoed story. The stories very frequently contain little independent reporting; often they largely parrot the language developed by the journal to hype the paper.

This relates to what I've written before about how press releases drive reporting on planetary science news. But so far it doesn't have anything much to do with conference presentations. So let me explain where that comes in. Scientists' presentations at conferences typically involve work that is in progress, which has not yet been published in a peer-reviewed journal. Fairly often, as in the case of Sicardy's presentation on Eris, a scientist submits a paper for publication in the time between submitting an abstract to a conference and the actual date that they present at the conference. By giving a paper at a conference, they are essentially giving a preview of work that is soon to be published in a journal.

There are several journals -- typically, the most prestigious ones in their fields -- that have very strict policies against authors publicly discussing research results before they are formally published. If a researcher has been found in violation of this policy, the journal may revoke acceptance of the paper. This policy is colloquially known as the Ingelfinger Rule. In another very early entry on Embargo Watch, Oransky quoted another reporter, Bob Finn, in defining the Ingelfinger Rule:

Franz J. Ingelfinger, M.D., (1910-1980) was editor of the prestigious New England Journal of Medicine (NEJM) from 1967-1977. During his tenure he decreed that for an article to be published in his journal it must not previously have appeared elsewhere. The rule prohibited authors from releasing their results to the news media before the date they were published in the journal. A small number of other journals (such as JAMA) developed similar policies, and the net result is that scientists are often afraid to talk to reporters for fear that they'll lose the opportunity to publish in JAMA or NEJM (or Nature or Cell or Science).

In my experience, many planetary scientists live in fear of running afoul of the Ingelfinger Rule. As just one example, Carolyn Porco once asked me to take down all Cassini images from the Planetary Society website that I'd processed from the publicly released raw versions because, she said, any such images that appeared on planetary.org could not later be published in Science. As with Sicardy's concern, it turned out Porco's was unfounded.

In fact, neither Science nor Nature -- the two most prestigious journals in which planetary science results are published -- actually threaten to revoke publication of anything based solely on its presentation at a scientific conference. Here is Science's policy:

Scientists are welcome to present their results of their submitted or upcoming Science papers to colleagues at professional meetings and to share data with colleagues. Presentation at a meeting will in no way affect a decision on a manuscript. If the paper has been accepted for publication In Science, we ask that you inform the AAAS Office of Public Programs (202-326-6440) that you are planning to make such a presentation.

Comments to press reporters attending your scheduled session at a professional meeting should be limited to clarifying the specifics of your presentation. In such situations, we ask that you do not expand beyond the content of your talk or give copies of the paper, data, overheads, or slides to reporters.

And here is Nature's:

Nature does not wish to hinder communication between scientists. For that reason, different embargo guidelines apply to work that has been discussed at a conference or displayed on a preprint server and picked up by the media as a result. (Neither conference presentations nor posting on recognized preprint servers constitute prior publication.)

Our guidelines for authors and potential authors in such circumstances are clear-cut in principle: communicate with other researchers as much as you wish, but do not encourage premature publication by discussion with the press (beyond a formal presentation, if at a conference).

So Sicardy should have had no fear of letting people listen to, write about, and discuss his formal conference presentation. If there were any doubt about this, it should be cleared up by today's Embargo Watch post; Oransky contacted Nature about this specific presentation and was told "Yes, researchers with papers in submission at a Nature journal can certainly present at a scientific meeting but shouldn't court the press." If I had asked Sicardy any probing questions about his presentation, beyond clarification of facts he'd already presented, he shouldn't have answered them -- but I didn't, so it didn't come up.

The funniest thing about this kerfuffle, as I just figured out today, was that all the time Sicardy's results about Eris' diameter and albedo were sitting out in public view in his two-page abstract submitted to the meeting. Until recently, the American Astronomical Society (the parent organization of the Division of Planetary Sciences) had a policy of its conference abstracts being "freely available but embargoed" which, as Oransky pointed out, is completely silly, because you can't enforce an embargo on people who have not agreed to honor it in the first place. Earlier this year, thanks to Oransky's prodding, the American Astronomical Society reversed their policy, stating that "When meeting abstracts are available publicly, either electronically or in print, they are not embargoed."

So the embargo was doubly unnecessary! There's a lesson in here for wannabe investigative journalists: go read conference abstracts. They may contain all kinds of exciting secrets, just waiting to be uncovered! And to researchers who'd prefer to share their work with the public: if anybody asks about unpublished work that has a chance of making it into Science or Nature, just invite them to see what you have to say at a conference, or send them a helpful link to your conference abstracts, and don't fear Ingelfinger!

Sicardy's paper on the occultation clear demonstrates his belief that the odds are now in Pluto's favor that it is larger than Eris. NASA's New Horizons spacecraft will measure Pluto's diameter so we will not have long to wait. Closest approach is Bastille Day 2015. In fact, in one part of said paper, Sicardy said Pluto appears to be 12 kilometers larger than Eris. I wonder if Mike Brown who has claimed to have "killed" Pluto with his co-discovery of Eris will apologize for beheading a Disney doll of Pluto if Pluto is categorically shown to be larger than Eris. Somehow, I doubt it.

this link seems to be from the people who did the work in chile......the english is not so good, but it is the research that counts...... http://www.spaceobs.com/perso/recherche/Eris/

As a scientist myself (I have a PhD degree in plant science) I can say that sometimes I also need to be inspired, and receive gratitude for my work. Indeed, satisfaction is what keeps me motivated. It's only natural that the New Horizons team would feel the same, especially after years of waiting for these results. The truth, however, is that the general public doesn't care much about who's standing behind the mission. The general public cares about the pictures, about the WoW! moment.