Yet another sharp-eyed reader (I love my readers!) pointed out to me that the German-language release on the MPS website about the latest Vesta image from Dawn included what looked like a tiny thumbnail of a color view. This is the first color view of Vesta that I've seen, and it hints that Dawn's framing camera is getting ready to tell us so much more about the second-largest asteroid than we would ever have been able to learn about it with Earth-based telescopes. 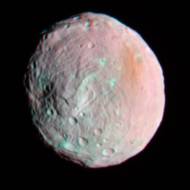 Dawn took this false-color view of Vesta on July 9, 2011, from a distance of 41,000 kilometers, with a resolution of 3.8 kilometers per pixel. Views through several infrared filters enhance the variations among different types of materials that cover Vesta's surface.

This isn't Vesta's actual color; it's a false color view, composed of several images that Dawn's camera took through filters that only allow infrared wavelengths to pass through. The stuff that makes up the surfaces of our solar system's solid worlds tends to be kind of monochromatic in wavelengths visible to the human eye, so they all look gray to us. But look at them with eyes sensitive to infrared wavelengths, and color variations blossom.

The pink and orange and aqua-colored areas in this image reflect infrared light in different ways. That might be because they're made of different material -- the orange area might have more of a certain mineral than the other colored areas. Or it might be that they're made of the same materials, but the grain sizes are different. Or it might be that some areas have been exposed to weathering from bombardment by energetic particles from space longer than others. In fact the color variations are probably a combination of all three of these, and untangling their contributions and what they mean about the geologic history of Vesta is the work that'll occupy the spectroscopists on Dawn's science team for the next several years. How exciting it must have been for them to see those aqua and orange splashes for the first time!

The reader who pointed this image out to me commented that it was so small and he was looking for a bigger version. But I told him to look no further; this, my friends, is, at last, an image posted at the resolution at which it was originally captured. It was taken on July 9, 2011, from a distance of 41,000 kilometers; multiply that by Dawn's 94-microradian camera angular resolution and you get 3.8 kilometers per pixel. Divide Vesta's 570-kilometer diameter by that and you get about 150 pixels, which is how big this picture is. But that was 10 days ago, and Dawn's much closer now, only 9,100 kilometers as I write, so it's getting pics at 850 meters per pixel -- Vesta's nearly 700 pixels across, and growing. Once Dawn's inside 6,000 kilometers Vesta will be so big it won't fit in the camera's field of view anymore!

This is the third Vesta image I've posted in the last 24 hours -- here's the first and second, if you've had trouble keeping up.