I've been mucking about in the Cassini data archives (as I often do when procrastinating) and unearthed a neat, if short, mutual event sequence of two crescent moons passing by each other: Rhea, in the foreground, and Dione behind.

Rhea and Dione were only barely lit crescents (the phase angle was 160 degrees) when Cassini caught the two passing by each other on March 27, 2006.

This set of images provides an example of what a difference a choice of contrast adjustment can make to the appearance of an image. The version above I brightened enough to reveal the crescent-lit terrain without saturating it. Here's another version, in which I cranked up the contrast, saturating the crescent parts, but also revealing some surprising details on the night side of Dione. What's surprising is that Dione's nightside is visible but Rhea's is not. The nightside lighting is Saturnlight -- that is, light that reflected first off of Saturn before striking Dione. How is it possible that Dione can be Saturnlit but not Rhea? Think about it a bit, then scroll down for an explanation.

Rhea and Dione were only barely lit crescents (the phase angle was 160 degrees) when Cassini caught the two passing by each other on 27 March 2006. 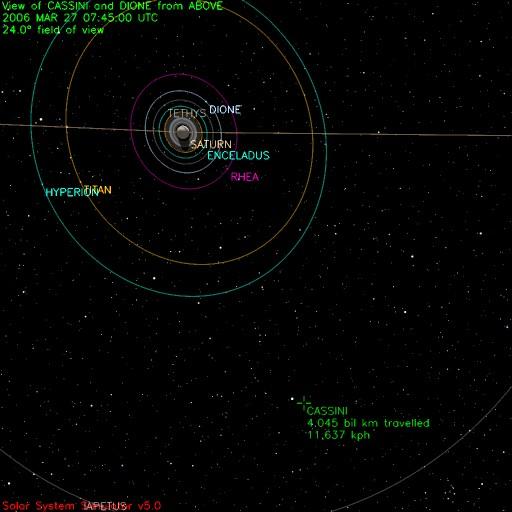 And because one cool Cassini animation deserves another, I share with you a bonus awesome color view of a recent mutual event between Rhea and Titan, assembled by unmannedspaceflight.com's Astro0: