The Moon is a KREEPy place

If you go to a conference about lunar geology, sooner or later you'll hear the term "KREEP" bandied about. (And almost as soon as KREEP is mentioned, a bad pun will be made. It's inevitable.) Context will tell you it has something to do with a special kind of lunar rock, but that'll only get you so far. What is KREEP, and why is it important on the Moon?

The simple definition is that KREEP is an acronym for potassium (chemical symbol K), rare earth elements (the ones that are always cut out of the periodic table and drawn in two separate rows of their own, abbreviated REE), and phosphorus (chemical symbol P). Despite their name, the stable rare earths are actually not that uncommon in nature; a few are as common as copper and lead and all are more common than mercury and iodine and way more common than gold and iridium. 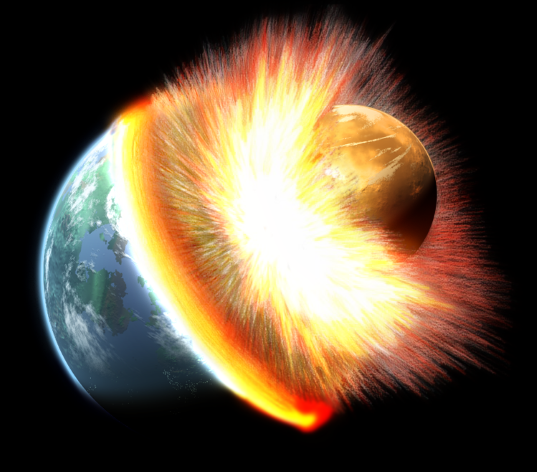 You're all probably familiar with the story: early in the formation of the solar system, a Mars-sized planet whacked into the proto-Earth, and some of the debris (mostly stuff that spalled off the mantle of the Mars-sized impactor) went into orbit around Earth and eventually collected gravitationally into the Moon. This early Moon was mostly or completely molten.

The molten moon had a bulk composition of rock; more specifically, its bulk composition is of a mafic rock, one that's rich in iron and magnesium. It had also lost most of its volatile elements like hydrogen and sulfur, which would have bubbled out of the melt as gases and been stripped away by the solar wind. When a melt with this particular composition cools, it begins to solidify, of course.

But the way it solidifies is a bit strange. The solid material that forms when a rock melt solidifies does not have the same composition as the melt. What happens is that a particular kind of crystal starts to form in the melt. This crystal is called olivine; it's made of iron and/or magnesium plus silicon and oxygen. So when olivine crystals start to form, pretty much the only elements that are being removed from the melt to make the solids are iron, magnesium, silicon, and oxygen. Other minerals that crystallize out of rock melts at high temperatures are pyroxene (similar to olivine, just a bit richer in silicon and oxygen) and anorthite (which is made of calcium, aluminum, silicon, and oxygen).

Some elements just can't squeeze in to the crystal lattices. Potassium, for example, is a very common element whose ions are so puffily large that they just don't fit very well in crystal lattices that want nice little iron and magnesium ions, and they also have the wrong charge (+1). So potassium, and other elements that are incompatible with the crystals that form at high temperatures, don't get included in the growing crystals; they remain in the leftover melt that still hasn't solidified yet.

OK, getting back to our cooling molten Moon: now gravity becomes important. Olivine and pyroxene are both quite dense, denser than the remaining melt. Given enough time for gravity to operate -- and it would have had quite a while, because it takes a long time for a molten body as big as the Moon to solidify -- the olivine and pyroxene crystals will sink all the way to the bottom of the magma ocean. They built up in a thick pile, hundreds, even a thousand kilometers worth of olivine and pyroxene crystals. Meanwhile, anorthite is less dense than the melt. So the anorthite crystals floated to the top, becoming a scum on the surface of the lunar magma ocean. That scum of anorthite is what we see today as the lunar highlands, relatively light-colored rocks that are made almost entirely of anorthite. (A rock made mostly of anorthite crystals is called anorthosite.) This process of forming and removing crystals of different composition than the remaining melt is called "fractional crystallization."

In between the olivine-pyroxene mantle and the anorthite crust, the leftover melt became more and more and more enriched in the incompatible elements, including potassium, rare earths, and phosphorus, the members of KREEP. This material was the last to solidify. It may actually have remained molten for a very long time after everything else was solid, because among the incompatible elements are thorium and uranium, radioactive elements that generate a lot of heat on their own through their decay.

OK, so that's what KREEP is. Now, why is it important? Fast-forward from the formation of the Moon to the Apollo program. The Apollo astronauts collected lots of samples of rocks and dust, and KREEP-rich materials were returned from every one of the landing sites. Geologists concluded that that KREEP-rich late melt was present all over the Moon.

So the results of the Lunar Prospector mission's Gamma-Ray Spectrometer (GRS) came as quite a shock. The GRS detected gamma rays naturally emanating from the Moon. Most of these gamma rays come from neutrons banging into atoms in the lunar crust, but gamma rays of one specific energy (2.6 Megaelectronvolts, if you must know) almost all come from the radioactive decay of thorium-232. So by looking at gamma rays from the Moon at that specific energy, the GRS team could make a map of thorium abundance on the Moon. Thorium, being an incompatible element that is found with the rare earths, is a marker for KREEP. Based on the Apollo samples, the GRS team espected to find a spotty distribution of thorium, some here and some there, all over the Moon. What they got instead was this: 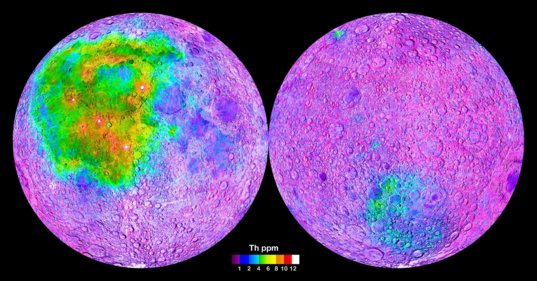 Thorium map of the Moon

Thorium is concentrated mostly in one area of the lunar nearside, in the around the great big Imbrium basin. It's not nearly as abundant anywhere else. On the farside, there's a bit more in the South Pole-Aitken Basin than elsewhere, but the enrichment is slight. If Imbrium dug in to the KREEP-rich material at the base of the crust, South Pole-Aitken should really have dug a lot of it out onto the surface, but it didn't; and neither did many of the other big basins, like Orientale for instance. This suggests that the KREEP-rich late last melt was concentrated on the nearside for some unknown reason; the heat from its decaying thorium and uranium could help explain the late mare volcanism on the nearside, which is kind of neat. 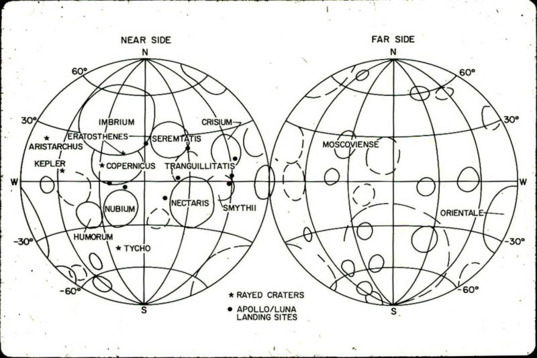 The thorium map is interesting, but it's also disturbing. If the rocks from every single Apollo landing site included KREEP-rich material, that means that the Apollo samples aren't representative of the Moon as a whole, only of the part of the Moon that's rich in KREEP. In fact, there is a distinct possibility that a great many of the Apollo samples represent ejecta from a single impact, the one that produced the Imbrium basin, which was one of the last big basins to form on the Moon; its ejecta did very likely land everywhere that the Apollo astronauts gathered samples. That's bad news for people who rely on the ages meaured from Apollo rock samples and the absolute dates given to the cratering chronology derived from it. Here's a 1998 paper (PDF) that examines that possibility and discusses its implications.

Very interesting. Could KREEP be an ore for REEs for sale on Earth?

I think that, in general, ores mined on the Moon will be most useful in applications on the Moon. We're still finding large deposits of REEs on Earth. Though they're in relatively inaccessible places. Which will be harder to mine, 5000m below the ocean surface, or the surface of the Moon? http://www.telegraph.co.uk/finance/comment/ambroseevans_pritchard/9951299/Japan-breaks-Chinas-stranglehold-on-rare-metals-with-sea-mud-bonanza.html

Good morning,I have recently made analized a rock which came back with Eu anomalies and KREEP composition. Can anyone help please. Gabriel