Endeavour on Opportunity's horizon: Are we there yet?

Last week the Mars Exploration Rover team dumped another 90 sols' worth of data from Mars into NASA's Planetary Data System, the national repository for space mission data. As I did once before, I dove into this fresh pile of data to pull out Opportunity's color views of the distant rim of Endeavour crater. What I wanted to see was those hills getting rapidly bigger and taller and more detailed, and I wanted to show that to you as an animation.

Ultimately, I was disappointed. From the time that Opportunity first spotted those hills around sol 2140 (January 30, 2010) to the last color view available in the data archive (which dates from July 2010), the view just didn't change all that much. Here's the sol 2140 view I posted before:

On sol 2140 (January 30, 2010), parked at the edge of Concepción crater, Opportunity got her first clear view of the rim of Endeavour crater. She is aiming toward "landfall" at Cape York, a spot to the left of the tall peaks of Cape Tribulation, 13 kilometers away. Cape Tribulation and Cape Dromedary are both on the southwest rim of Endeavour crater, the closest part of the rim to Opportunity. The northwest rim has been eroded away. More distant hills on Endeavour's eastern rim, are much farther away than Cape Tribulation; the spot labeled "Batavia" is 30 kilometers away. Iazu is another crater beyond Endeavour, 36 kilometers away. This panorama was created from archived science data from the Planetary Data System.

During that time Opportunity covered about 1.5 kilometers, as the crow flies, toward her goal on the rim of Endeavour, which is no small amount. So why didn't the perspective change very much?

There are a couple of reasons. For one thing, those hills on the horizon are very far away, so far that 1.5 kilometers' travel makes little difference in Opportunity's perspective. Cape Dromedary was more than 18 kilometers from the rover as of sol 2140, and about 17 as of sol 2314, which is not much of a change. For another thing, I keep on making the mental mistake of thinking that Opportunity is headed toward Cape Tribulation, the tallest visible peak; but in fact Opportunity's roving toward a spot considerably to the left of Cape Trib, a very low hill called Cape York that she probably won't even be able to see until she's nearly on top of it. Even when she has gotten to Cape York, she'll still be more than 2 kilometers away from the nearest hills of any real magnitude. 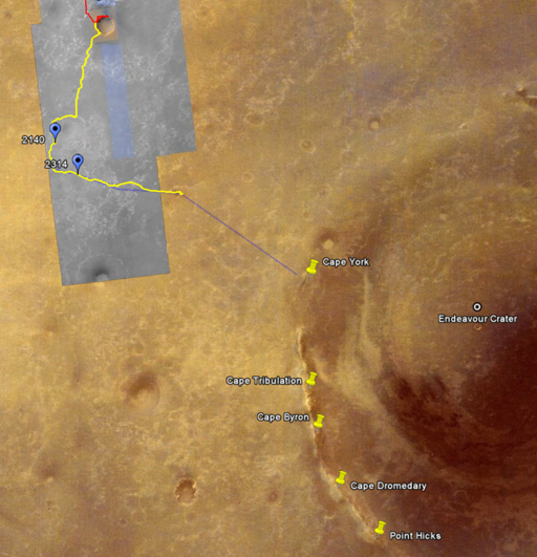 How far to the peaks on Endeavour’s rim?

Between sols 2140 and 2314, Opportunity covered about 1.5 kilometers toward the rim of Endeavour crater, a distance that failed to make much difference in her perspective on the distant hills of Cape Tribulation and Cape Dromedary.

So in the end this exercise was more than a bit disappointing. It just goes to show how very long the journey is ahead of Opportunity, and how much patience is required when roving across Mars.