The Cassini Raw Images Website always offers rewards to the browser. This evening I found the raw images necessary to create this color composite, showing the hazy orange moon Titan, the mid-sized icy moon Dione, and the tiny rock Prometheus all at the same time. (Prometheus may be a little hard to spot, a tiny oblate thing sitting on top of the faint line of the F ring at upper left corner.) 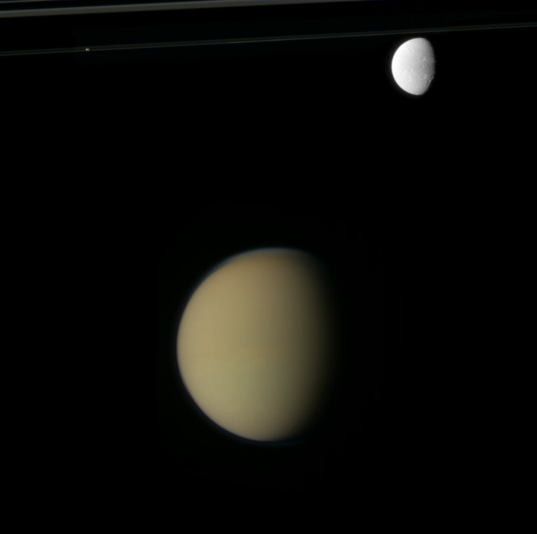 Cassini captured the three images for this approximately true color composite on 18 October 2010. While Cassini studied Titan, the mid-sized icy moon Dione wandered through the field of view, while Prometheus sat atop the F ring at upper left.

The original images were captured through red, green, and blue filters on October 18, while Titan was more than 2.5 million kilometers away from the Cassini orbiter. Dione was shooting through the field of view rather quickly, and Prometheus even faster; in fact, Prometheus was well gone by the time that the blue-filter image was taken, so I had to fake it with a piece of the green-filter image. Everything in the image had to be aligned slightly differently -- Titan, Dione, Prometheus and its related chunk of F ring, and the tiny sliver of the main rings at upper left corner. 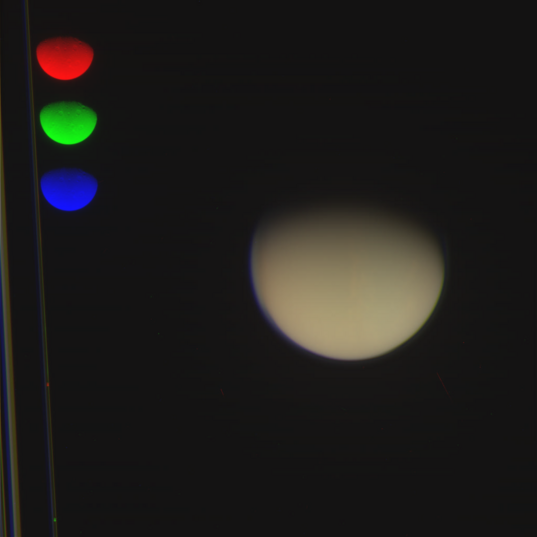 A Cassini color image without alignment

Three images taken through red, green, and blue filters on October 18, 2010 were combined into a color composite without any alignment of the individual images. The most obvious problem is with Dione, which clearly moved between red, green, and blue filters, but if you look at upper left you can see the tiny potato shape of Prometheus showing up in only red and green filters and absent entirely from the blue filter image. Less obvious are color channel misalignments among the rings and on Titan; the blue channel is shifted several pixels upward with respect to the red and green channels, resulting in a blue halo above Titan and the rings and a yellow and green halo below them.

Hopefully most of you agree that the top version of the image is an improvement!