Yet another Jupiter impact!? August 20, seen from Japan

NOTE Aug 24: I posted a followup to this article with two more videos.

This may be a very common event after all: another optical flash has been observed on Jupiter, again from an observer far east of the Greenwich meridian, though it was not Anthony Wesley (for once). This time it was Japanese amateur astronomer Masayuki Tachikawa who was pointing a video camera-equipped telescope at Jupiter and who was fortunate to capture an optical flash as it happened. Here's the video:

And here's a still: 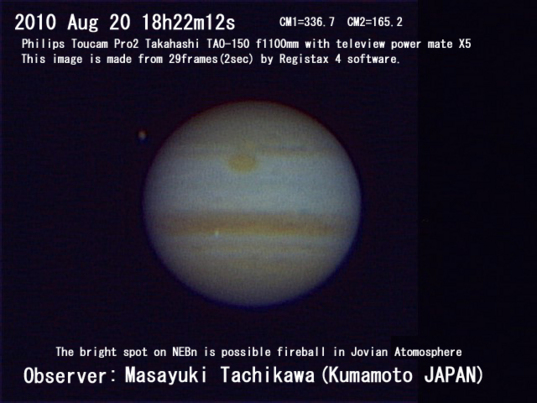 Yet another impact(?) on Jupiter

An impact flash was observed on Jupiter by Masayuki Tachikawa of Japan at 18:22:12 on August 20, 2010. It is easy to see against Jupiter's dark North Equatorial Belt. (The image is upside down, the orientation seen through the telescope's eyepiece.)

The still and video came from this page on the website of the Association of Lunar and Planetary Observers of Japan. If I understand the text on that page correctly, a few other Japanese observers attempted followup observations (mostly one or two planetary rotations later) and observed no trace.

Compare these images to the ones from the June 3 event: 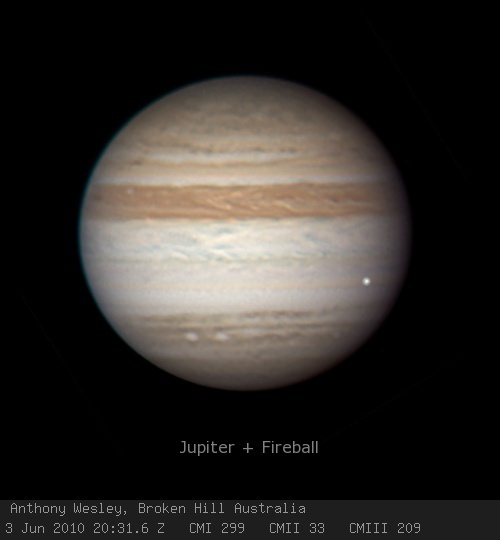 Australian amateur astronomer Anthony Wesley was observing Jupiter at 20:31 UTC on June 3, 2010 when he fortuitously caught the flash of some object hitting the planet.

June 3, August 20, that's a rate of roughly four of these per year -- keep watching, amateur astronomers, and keep those video cameras running! You may catch the next one. This actually is a perfect example of why amateur astronomers remain relevant and important in astronomy: no professional telescope is going to be hanging around shooting video of Jupiter night after night, but you don't need an enormous professional telescope to discover the latest Jupiter impact, or to watch the changes and motions in its belts and storms. Time is more important than size, and time is what amateurs have that professionals don't.

Hat tips to Jason Perry and Daniel Fischer for the news! See Jason Perry's blog and Kelly Beatty's blog at Sky & Tel for more coverage of this impact.