Following up on the story I first posted on August 22, the Jupiter impact fireball first noticed by Japanese amateur astronomer Masayuki Tachikawa has been independently confirmed by two other Japanese astronomers. The Association of Lunar and Planetary Observers (ALPO) of Japan is maintaining a site compiling these confirming reports, and Kelly Beatty has been gathering these and also commentary from notable professional outer planet astronomers on his blog.

Meanwhile, the 5-second video clip by Tachikawa that I posted on YouTube so I could embed it here has gone viral, with (as of this morning) 350,000 views; it was the #1 most popular video on YouTube in the Science and Technology category this morning, and the #5 most viewed video on YouTube overall. Holy cow!! The Internet moves in mysterious ways. In the spirit of "more is more," here are the two independent confirmations of the impact, by two other Japanese amateurs, both taken from the ALPO Japan page I linked to above. These independent confirmations are key because the three astronomers were separated by hundreds of kilometers. The fact that they all saw the flash confirms that it must have happened on Jupiter and was not just a flash in Earth's atmosphere that happened to coincide with Tachikawa's sight line to Jupiter. Note that all these videos have south up, the way Jupiter appears through a telescope.

Some of you may be asking: why didn't Ichimaru and Aoki notice these flashes before Tachikawa shared his discovery? Well, Ichimaru and Aoki, like Tachikawa, have telescopes equipped with video cameras. The cameras record thousands of frames -- potentially hours of video. They couldn't possibly look through all of that on a routine basis to hunt for these rare flashes; I bet they skim through their videos looking for rare moments of excellent seeing when the picture sharpens up, pull out particularly nice still frames, and then move on to the next night's observations. I've read a lot of commentators remarking on how there ought to be funding for a worldwide network of small telescopes to monitor Jupiter for these flashes, and I agree that's a good idea; such a project could work in much the same way that The Planetary Society's Shoemaker NEO Grant program funds amateurs to watch the skies for hazardous asteroids.

But recording continuous video Jupiter is only half of the battle; you also have to look at all that video to see these flashes. One way to do that might be to enlist the aid of the Internet in a citizen science project like Moon Zoo, asking people who don't have telescopes but who do like looking at lots of photos of Jupiter to pore through the recorded video, frame by frame, or maybe 5-second clip by 5-second clip, and look for flashes.

Meanwhile, on the same ALPO Japan page, I noticed Sunday morning a mention of an observation of a flash on Jupiter seen by Voyager 1 in 1979. I pulled up the paper, by Cook and Duxbury, and located the original Voyager 1 frame using the Rings Node's OPUS search tool. It's not pretty: 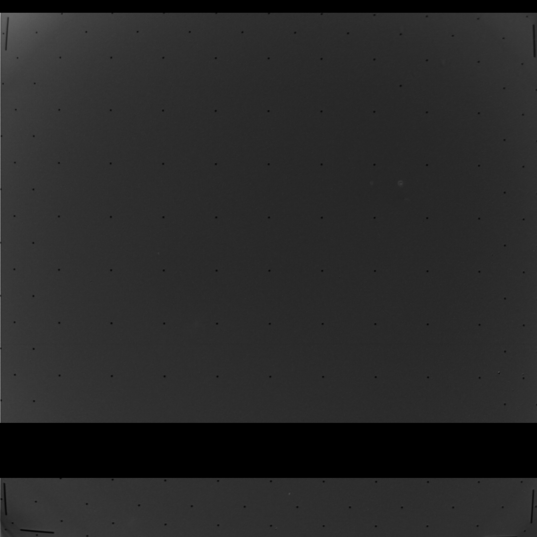 Voyager 1 finds a fireball on Jupiter

On March 5, 1979, having just passed its closest approach to Jupiter, Voyager 1 turned back to point its cameras at Jupiter's dark side to search for lightning. This image consists of three exposures of 35, 35, and 83 seconds; the three exposures were separated by gaps of 13 seconds, during which Voyager 1 slewed back to recenter its pointing. The range to Jupiter was 555,000 kilometers, giving a resolution of about 20 kilometers per pixel. Nearly everything that is visible here is a camera artifact: brightening toward the corners; regular pattern of black dots (reseau markings); the wide black bar is a data dropout, where the ground station failed (for whatever reason) to receive the data from Voyager 1. Near the bottom left corner of the image is a faintly brighter blob: this is a fireball, possibly from an impactor striking Jupiter.

Nearly everything you can see in this image is a camera artifact. Processing this one is beyond my skill. So I sent an email to two of my favorite amateur image mages, Gordan Ugarkovic of Croatia and Björn Jónsson of Iceland, to enlist their help. They produced two quite different processed versions, shown below at their original resolution and enlarged four times: 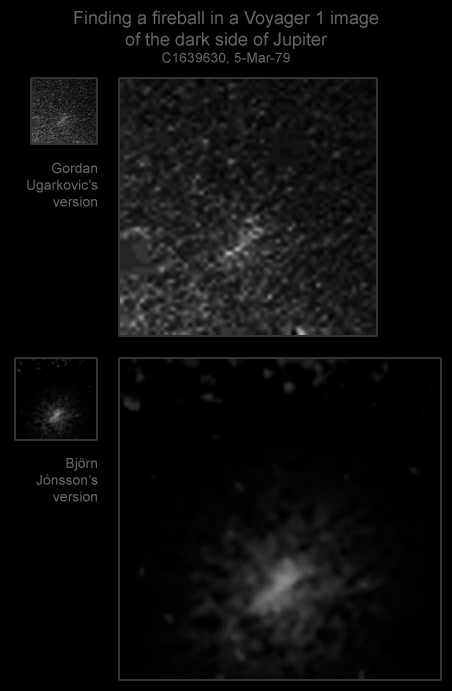 Two different attempts to bring detail out of the fuzzy image of a fireball spotted by Voyager 1 on the dark side of Jupiter on March 5, 1979.

How did they do it? Gordan's image is less processed than Björn's, which is why it has more noise (the salt-and-pepper appearance). Björn's may cross the line from science to art, but like all of Björn's work, it makes a much finer illustration. He told me that he flatfielded it and boosted the contrast, then took several steps to filter out the noise (Gaussian blur, high pass filtering, and use of the Photoshop "dust and scratches" filter). Then he selected the area around the flash with a feathered edge and further darkened the noisy black space around it -- a definite cheat, he said, but hey, it's just for illustration purposes. He noted that the fact that the flash appears broader to upper right than lower left is a real feature of the original data. There's only so much that can be done with Voyager data. Unlike modern space cameras, which record data at depths of 12 bits per pixel or higher, Voyager data was recorded at only 8 bit depth, meaning there are only a possible 256 gray levels across an image; this image had much less contrast than that. The original pixel values ranged from about 52 to 56 in the background and 55 to 57 in the flash -- a tiny difference.

Still, this tiny difference didn't prevent Cook and Duxbury from doing some science with the data. The original flash was roughly 1000 kilometers across. From its intensity they calculated that the impactor was 11 kilograms in mass and therefore about 14 centimeters in diameter. That is tiny!!! Flashes like this one must be visible on the dark side of Jupiter all the time. For them to be visible to astronomers on Earth, they have to be much larger -- not only because the flash needs to cover a large area to be noticeable in small telescopes, but also because the flash has to compete with the brightness of Jupiter's reflective cloud tops.

Jason Perry managed to get a post up on the Voyager 1 pic before I did -- curses!