Although there's no details visible in the image below, it's still a pretty impressive feat. During an annual checkout of its instruments, New Horizons turned back to snap a photo of Jupiter, which it passed by more than three years ago. The planet is now 16.3 astronomical units away -- more than 2.4 billion kilometers -- and New Horizons is seeing light that left Jupiter more than two hours previously. Even more impressive, the Sun was only 17 degrees away from Jupiter in New Horizons' sky, glowing away at a whopping 460 million times Jupiter's apparent brightness. That, in fact, was the real reason for this photo; they wanted to see how the LORRI camera would perform under such viewing geometry, which will be similar to the "lookback" images they'll be snapping as they recede from their Pluto encounter. 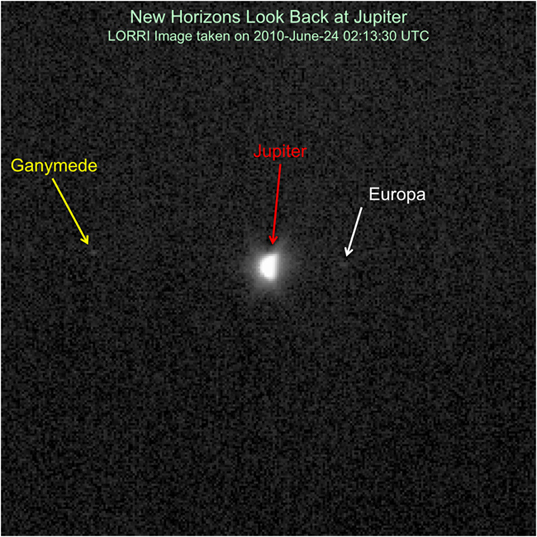 The New Horizons team does a good job of reminding us that the spacecraft is still out there, still working, always preparing for the days, still more than four years in the future, of its exciting encounter with Pluto, Charon, Nix, and Hydra! For more about this image, check out their latest Web update. I'll note here that Alan Stern mentions again his intention to do a Solar System Family Portrait, like Voyager did.