Mimas' cold region: another new mystery for Cassini to explore

EDIT: Thanks to John Spencer (again!) for correcting some errors. --ESL

This new map of Saturn's moon Mimas -- representing data captured by the CIRS thermal infrared spectrometer during Cassini's February 13, 2010 flyby -- is just baffling. At least I was baffled by it. So I called up John Spencer, a member of the CIRS team, to ask him about it, and apparently I'm in good company; they're baffled too.

Here's the map I'm talking about: 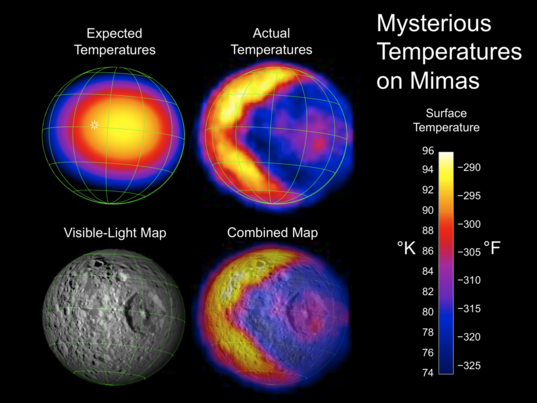 This map illustrates the unexpected and bizarre pattern of daytime temperatures found on Saturn's small inner moon Mimas (396 kilometers in diameter). The data were obtained by the composite infrared spectrometer (CIRS) on Cassini during the spacecraft's closest-ever flyby of Mimas on February 13, 2010. The upper left image shows the expected distribution of temperatures. The white sun symbol shows the point where the sun is directly overhead, which is at midday close to the equator. Just as on Earth, the highest temperatures were expected to occur after midday, in the early afternoon. The upper right image shows the completely different pattern that Cassini actually saw. Instead of the expected smoothly varying temperatures, this side of Mimas is divided into a warm part (on the left) and a cold part (on the right) with a sharp, v-shaped boundary between them. The warm part has typical temperatures near 92 Kelvin (minus 294 Fahrenheit), while typical temperatures on the cold part are about 77 Kelvin (minus 320 Fahrenheit). The lower two panels in the annotated version compare the temperature map to Mimas' appearance in ordinary visible light at the time of the observations.

CIRS is an infrared sensor that can detect thermal emission from most surfaces in the Saturn system (though some of the surfaces are so cold that the thermal emission occurs at wavelengths longer than CIRS can "see" using its highest-resolution, shortest-wavelength detector). How bright a surface appears at these thermal wavelengths correlates with its temperature; it takes some detailed modeling to figure out exactly how brightness correlates with temperature.

Let's enumerate some of the ways that it's weird:

I ran these observations past John and he confirmed that that's what he saw too. One thing to be careful of: it is tempting to look at the pictures and assume that the cold region has something to do with the giant crater Herschel, since Herschel seems to be in the middle of the cold spot. (At least that's the conclusion I jumped to.) But it's just as likely that it's centered on the leading hemisphere, which is to say that it's centered on a longitude of 90 degrees; Herschel's center is offset from that to the west, at a longitude of 120 degrees. Since we're not seeing the eastern edge of the cold feature, it's a little hard to be certain where it's centered.

As for explanations, "it has to be a thermal inertia thing," he said. Thermal inertia is a physical property of a substance; it's a measure of how quickly the substance heats up or cools down. Liquid water and solid rock both have high thermal inertia; substances with high surface area, like Mars' ubiquitous dust, have lower thermal inertia. Earlier results from Cassini have already indicated that Saturn's moons, generally speaking, have much lower thermal inertia than Jupiter's, suggesting that Saturn's moons have snowier, fluffier surfaces than Jupiter's. I should note here that the caption to this image on JPL's Photojournal page uses a different term, thermal conductivity: "The cold part is probably colder because surface materials there have a greater thermal conductivity, so the sun's energy soaks into the subsurface instead of warming the surface itself." The two properties are related: the thermal inertia of a substance is equal to the square root of its thermal conductivity times heat capacity times density. (Thanks, John, for that clarification.)

Still, whether it's thermal inertia or thermal conductivity, it's not at all clear why there should be this big spot on Mimas' leading hemisphere where the properties are so different from the rest of Mimas. John did warn me to be a little less surprised about the warm areas than the cool areas because there are various effects their temperature model doesn't take into account that can result in higher apparent temperatures near the limb. But I should be very surprised about the cool temperatures over the leading hemisphere and the sharp boundary between the cool and warm areas.

One thing they are looking into was to compare the temperature map to the maps of the colors of Saturn's moonsthat Paul Schenk has been working on recently. Paul has made maps of the colors of the icy moons and discovered some intriguing patterns. Many of the moons have reddish-colored trailing hemispheres. Two of them, Mimas and Tethys, have blue color in an equatorial stripe on the leading hemisphere. Check out the map of Mimas below and note how that blue region is sort of lens-shaped -- it is grossly similar to the shape of the low-temperature region in the CIRS map.

These maps of the colors of Saturn's icy moons were produced by Paul Schenk. The data is from Cassini images captured through infrared, green, and ultraviolet filters, so it covers a broader region of the electromagnetic spectrum than the human eye can see. On each map, the trailing hemisphere is on the left; the anti-Saturn point is in the middle; and leading hemisphere is on the right.

Although the correlation is suggestive, John said he was "not convinced it's exactly the same" as the CIRS cold region, as the color difference has more diffuse boundaries than the feature visible in the thermal data. (However, Paul Schenk thinks the two are "almost exactly coincident." Different scientists, different takes on the data!) And even if the two are correlated, it's still not obvious why the region that appears blue in the color maps should have exceptionally high thermal inertia (or high thermal conductivity).

What's next? They'll be paying more attention to Mimas, John said. They're going back through their older data, which would have been taken from a greater distance, to see if they can map out the right-hand side of the cold region to determine its extent and see if that edge also lines up with the anomalously blue region seen in Paul's maps. (This will also allow them to distinguish for sure whether the feature is centered on the leading hemisphere, as it seems to be, or is centered on Herschel.) And they're taking a look at Cassini's future plans to see what kinds of observations they might do to attempt to understand what's going on. He said they're even looking into observations that could be done from Earth to learn more about this strange thermal behavior.

I remarked that every time we assume a moon is boring, we discover something about it that makes it not boring. Rhea used to be the dullest moon in the Saturn system; now we've learned that it might have its own rings. So then one might make an argument for Mimas being the dullest of the mid-sized moons, with its apparently ancient surface and only distinguishing feature being the one big crater of Herschel. But CIRS just showed us there are mysteries on Mimas that we don't understand. John pointed out to me that in both of these cases, it wasn't the camera images that resulted in the discovery of something interesting; it was the plasma instrument in the case of Rhea's rings, and the thermal infrared detector in the case of Mimas' weird temperature map. The best science comes out of Cassini when all the instruments get involved!