Geraint Jones was kind enough to send me a plot showing the actual data from the MIMI instrument that indicates the presence of a disk, possibly including ring arcs, around Rhea. He's also included some data from a similar flyby of Tethys, in which there's no evidence for such a ring. (Tethys is actually smaller than Rhea; the diagrams are scaled so that the two moons look the same size, for comparison purposes.) You can see that, for Tethys, the squiggle representing the flux of electrons, is at a pretty constant level of about 500 counts per second until Cassini passes into Tethys' shadow, where it drops to below 30 (the scale is logarithmic). The squiggle looks very different for Rhea; as Cassini approaches Rhea there's a steady dropoff from 2000 to about 1500 until it reaches Rhea's shadow, and superimposed on that are three symmetrical narrow dips, which is what Jones and his coauthors are identifying as possible rings or ring arcs. 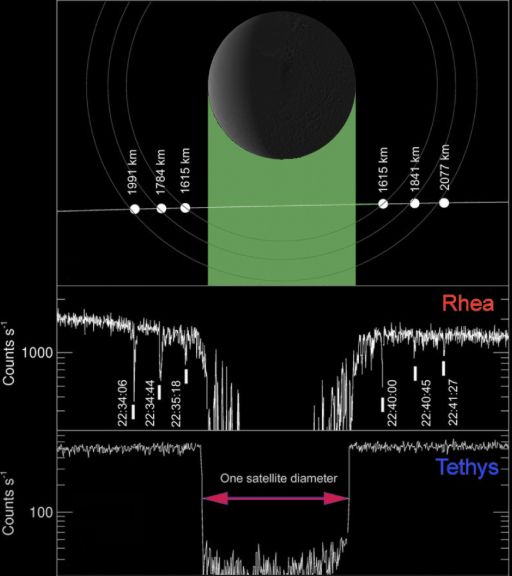 As Cassini flies by the icy moons, its Magnetospheric Imaging Instrument (MIMI) measures the flow of electrons through Saturn's magnetosphere. In a flyby of Tethys, the flow of electrons was constant until it was blocked by the bulk of the moon, then the flow resumed when Cassini came out of the moon's shadow. However, during the November 26, 2005 flyby of Rhea, MIMI witnessed a decline in the flux of electrons within Rhea's gravitational influence, as well as three pairs of steep drops in the electron flux that may indicate the presence of three rings (or ring arcs) in orbit around the moon.