Hubble sees both of Saturn's aurorae

Yesterday, the European wing of the Hubble PR machine released this cool image of Saturn and its aurorae, with an associated video (below). Imagine riding along on a spacecraft at Saturn and being able to see its auroral show! Cassini has actually observed the aurorae in motion before, but this observation is unique because we can actually see both aurorae in action at the same time. 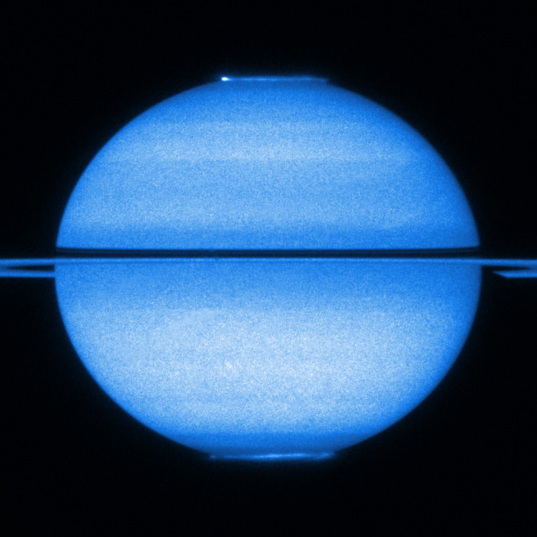 A unique view of Saturn in the ultraviolet from Hubble captures both of its aurorae in simultaneous glow. The image was captured by the Advanced Camera for Surveys in early 2009, as Saturn was nearing its equinox, so the rings are seen nearly edge-on and their shadow forms a thin black line across Saturn's disk. The aurorae are revealed through the use of a filter that permits only far-ultraviolet light to reach the ACS camera detector. (The blue color is false colorization, as seems traditional for ultraviolet images.)

The press release explained the aurorae better than I can, so I'll quote it here:

The Sun constantly emits particles that reach all of the planets of the solar system in the form of solar wind. When this electrically charged stream gets close to a planet, the planet's magnetic field traps the particles, bouncing them back and forth between its two poles. The magnetic field thus focuses the particles on the polar regions, where they interact with atoms in the upper layers of the atmosphere, creating aurorae....

The light show of Saturn's aurorae appears symmetric at the two poles. However, analyzing the new data in greater detail, astronomers discovered some subtle differences between the northern and southern aurorae, which reveal important information about Saturn's magnetic field. The northern auroral oval is slightly smaller and more intense than the southern one, implying that Saturn's magnetic field is not equally distributed across the orb of the planet; it is slightly uneven and is stronger in the north than the south. As a result, the electrically charged particles in the north are accelerated to higher energies as they are fired toward the atmosphere than those in the south. This confirms a previous result obtained by the space probe Cassini, in orbit around the ringed planet since 2004.

Here's the movie. The first several times I viewed the movie I came up with tons of questions that were not answered by the associated press release. Thankfully, the scientist involved in the research, Jonathan Nichols, replied very quickly to my numerous questions -- explanation below!

You can see that there are five distinct clusters of dates, which correspond to the different steps in ring opening angle you can see in the animation. Nichols explained: "The change in ring opening angle is highlighted by the grouping of the above days. This was done for a number of reasons, including timing the observations such that Cassini was in a high inclination at the time the images were obtained - this is the best position for providing good supporting in situ measurements." In other words, Nichols was able to observe both aurorae at the same time from afar, with Hubble, while studying either the northern or southern one up close using instruments on Cassini.

I asked about the choice of filter. Nichols said, "images were obtained using the F115LP and F125LP longpass filters, which have cutoffs at 115 nm and 125 nm, respectively." For context, the human eye can't see wavelengths much shorter than 400 nanometers, so this is really quite far into the ultraviolet. The two filters "were alternated during the first few orbits. Essentially, the F125LP filter is like a darker pair of Hubble sunglasses than the F115LP filter, so in these images I've compensated for this such that the aurora is the same brightness for both filters. This compensation is only valid for the auroral emission, though - not the planet's disk - so the disk appears to change brightness between the two filters." That's what causes the "beating" in brightness in the early part of the movie.

These wavelengths can also be observed with the Ultraviolet Imaging Spectrometer (UVIS) on Cassini. About that, Nichols said, "UVIS can produce images with better signal-to-noise than Hubble (because it's much closer!), but it needs to build up images by slewing its slit across the planet, which takes about an hour, as opposed to the 100s temporal resolution obtained by HST. HST and Cassini auroral images thus fully complement each other, although it's very difficult to get simultaneous images because of the tight scheduling constraints of both spacecraft."

There are some obvious artifacts in the images, parallel lines crossing the view at an angle. I asked him what caused those. "The images were obtained using the Advanced Camera for Surveys (ACS) Solar Blind Channel (SBC), which has a number of idiosyncrasies including a bust row of pixels and a shadow from a 'repeller wire.' We try to compensate for these, e.g. by interpolating across the blank row of pixels, but the results are not perfect and result in the faint lines you see in the images."

Finally, I noted one particularly cool event within the animation, on one orbit about 40% of the way through, when Titan sneaks in from the left and actually casts its shadow across the northern aurora. 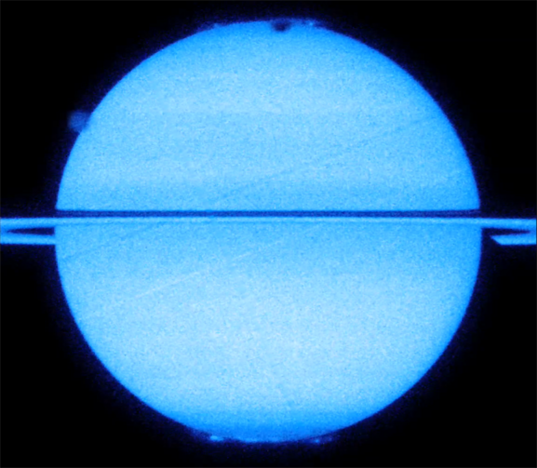 In this photo, Titan is also entering the view, and casts a shadow on the northern aurora.

I asked whether the shadow on the aurora would be expected to have an effect. Nichols told me that observing Titan's shadow on the aurora was utterly fortuitous. He went on to say that "It was useful because it provided a spot where there was no background sunlight contaminating the auroral emission, and allowed us to calibrate the background subtraction in the other images. Beyond that, well, auroras are caused by electric currents flowing along the magnetic field, and how much current flows is dependent on how well the ionosphere conducts electricity - this is dependent on how much sunlight falls on the ionosphere, which is obviously less in Titan's shadow. The brightness of the auroras on Earth is known to be different on the day and night sides, but there are very many complicating factors, and I wouldn't want to speculate on the effect of Titan's shadow on Saturn's auroras! It's worth investigating further though..."

That's one of the things that attracts me to space science: every cool image makes me ask questions. Some of the questions have ready answers; for some, a well-informed person can speculate plausible answers; and for the rest, well, we need further investigation!