There are two cool stories circulating today on the theme of discovering new places in the cosmos. The first one is from the European Southern Observatory and concerns the extrasolar planet known as GJ 1214b, located in our relative backyard, only 40 light-years away. It is a transiting super-Earth, meaning that we can see it pass in front of its star one time for each of its years (and also pass behind the star once each year) -- which sounds like it would be a rare event, but this planet is in a crazy location, only two million kilometers from its star, giving it a "year" that is only 38 hours long. Its "day" has infinite length -- so close to its star, it is certainly locked in spin-orbit resonance, so that the same face always stares upon its star. The star GJ 1214 is smaller than dimmer than our Sun, but so close to its star it must still be quite a hot place. The "super-Earth" bit means its mass is bigger than Earth's but significantly lower than Uranus or Neptune; part of today's report, published in Nature and summarized here, is the observation that its mass is about six times Earth's. 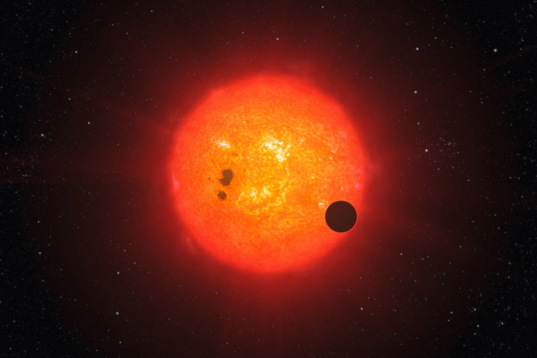 GJ 1214b is a "super-Earth" orbiting a small star located 40 light-years from our solar system. Observations suggest that its density is lower than that of Earth, so that it probably has a Ganymede-like composition (a metal and rock core overlain by a thick mantle of water in liquid or ice form). Unlike Ganymede, GJ 1214b is probably covered with a thick atmosphere of hydrogen and helium.

There is another exoplanet out there that is a super-Earth orbiting close to its star, Corot-7b. That one has a density similar to Earth's, so must be made of rock and metal like our planet (however, it is likely so hot that it's surrounded by a lava ocean rather than a watery one). GJ 1214b is different. While its mass is similar to CoRoT-7b, its diameter is larger, so its density is lower. GJ 1214b must be made of a significant quantity of water -- 75% water -- in addition to some rock and iron. To my mind, that makes it more of a "sub-Neptune" than a "super-Earth," but this is semantics.

What would a watery planet orbiting so close to a star look like? Here are the facts from the science paper, posted on the ESO website (in PDF format):

What form would the water take? I think that, although ice-I has lower density than water, there are other crystal forms of ice that you get under higher pressure that are higher density than liquid water. So, counterintuitive as it may seem, this watery world is probably made mostly of solid, very hot, water ice.

The most interesting fact I discovered upon reading the actual paper was that their models don't require the planet to be a watery super-Earth or sub-Neptune; a smaller rocky planet with a big hydrogen/helium atmosphere would also fit the observations. But then things are never as cut-and-dried when you read the scientific papers as they are presented in press releases. I think the take-away message from this paper is that the worlds out there are diverse! More research is necessary! (Which is half a joke. More research is always necessary.)

The other discovery announced today is from Hubble, and concerns "the smallest object ever seen in visible light in the Kuiper belt." If you read the press release, though, the object was not technically actually "seen" by Hubble at all. At 35th magnitude, it'd be invisible even to Hubble's best camera. The way that the team discovered this object was to mine four and a half years worth of data from Hubble's Fine Guidance Sensors. The Fine Guidance Sensors are a component of Hubble that help maintain its precise pointing -- they use interferometry to produce extremely precise position information on the locations of stars that Hubble can see, which in turn provides precise information on the direction that Hubble is looking. The Fine Guidance Sensors have been used for science before; they're so precise that they can be used to determine the velocity of stars' proper motion.

For this study, the researchers (Hilke Schlichting and coauthors) mined the data to search for moments when one of those guide stars winked out as a small object passed in front of it. Within the 4.5 years of data, the Hubble website reports, the team found one occultation event, lasting 0.3 seconds. They used the duration of the occultation and the amount of dimming to estimate the size of the tiny, invisible object, and determined it to be about one kilometer in diameter. One kilometer! That's smaller than (I think) all but one of the moons yet discovered in orbit around the planets, much closer targets.