New image of Opportunity on Mars

I really can't explain why it didn't occur to me to search for the rover in the image of Victoria crater released by the HiRISE team on Wednesday. Actually, now that I reflect on it, I can; the press release about the photo of the crater hit my mailbox five minutes before I had to leave the house for a workout class and I was racing to get the thing posted. Fortunately for me, the guys at unmannedspaceflight.com weren't in as much of a hurry, and quickly located Opportunity in the full HiRISE image. Armed with the knowledge that it was there, I figured out what sol the image was taken on (1,949), dialed up Eduardo Tesheiner's latest route map, and found it myself. It's actually remarkably easy to locate in the image -- the tracks cutting across dunes were visible at fairly low magnification. 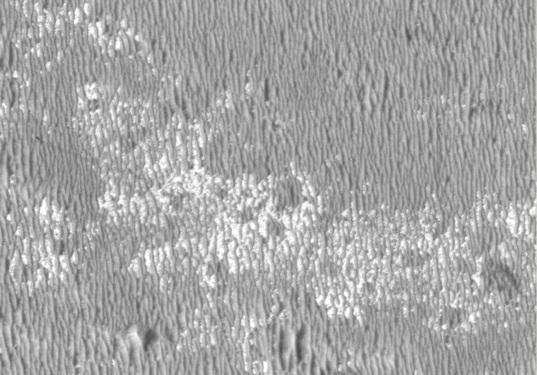 The HiRISE camera aboard Mars Reconnaissance Orbiter captured this view of Opportunity on July 19, 2009, sol 1,949 of the mission. Opportunity had departed on a easterly coarse but would turn around on sol 1,950 in order to investigate Block Island, a meteorite so large that is actually visible in this image.

Even cooler is that you can also see Block Island in this image -- that's the enormous meteorite that Opportunity backtracked in order to study. Here's the same image as above -- I just drew on it to show you where the tracks, rover, and meteorite are located. 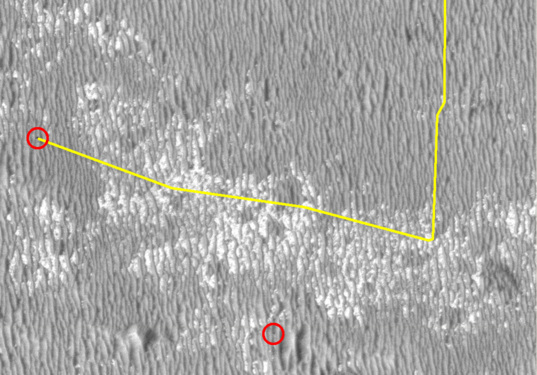 And finally, here's an extreme closeup on the rover and meteorite, enlarged 200%.

The HiRISE image of Victoria crater taken on July 19, 2009 also included the Mars Exploration Rover Opportunity (left) and the meteorite it would soon backtrack to study, Block Island (right).

I'm quite chagrined I didn't notice (or even think to look for) these before! I tip my hat to Phil Stooke for pointing it out.