Today the HiRISE team released a lovely new view of Victoria crater, taken nearly a year after the Opportunity rover departed it: 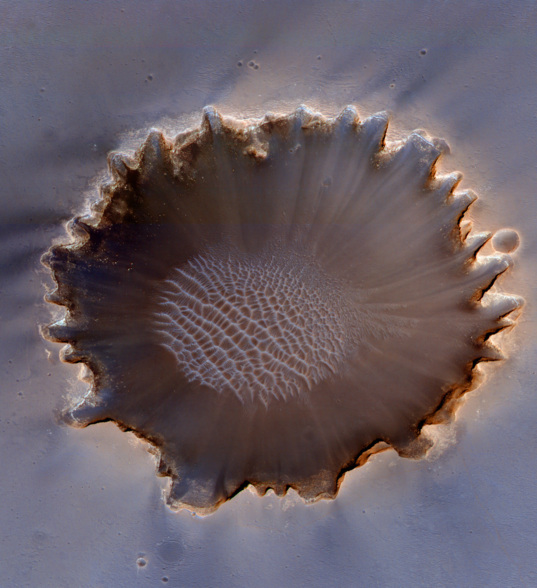 The HiRISE camera aboard Mars Reconnaissance Orbiter captured this oblique view of Victoria crater on 18 July 2009. Ordinarily, Mars Reconnaissance Orbiter's instruments are pointed straight downward, but to capture this view it looked 22 degrees away from nadir, toward the east. (East is to the top in this image.) The unusually oblique view allowed HiRISE to photograph the west-facing cliffs of the scalloped capes surrounding the crater. This is a crop from HiRISE's original view. The Mars Exploration Rover Opportunity spent more than a Mars year exploring Victoria crater, from September 2006 through August 2008, partially circumnavigating it before entering it briefly to examine the steep cliffs up close. Opportunity's tracks are visible as slightly lighter-colored, reddish-toned straight lines on the left side of the image, punctuated by dots, marking the spots where Opportunity turned in place.

Here's a version in which I slapped on labels for all the capes (yellow) and bays (blue) named by the rover team: 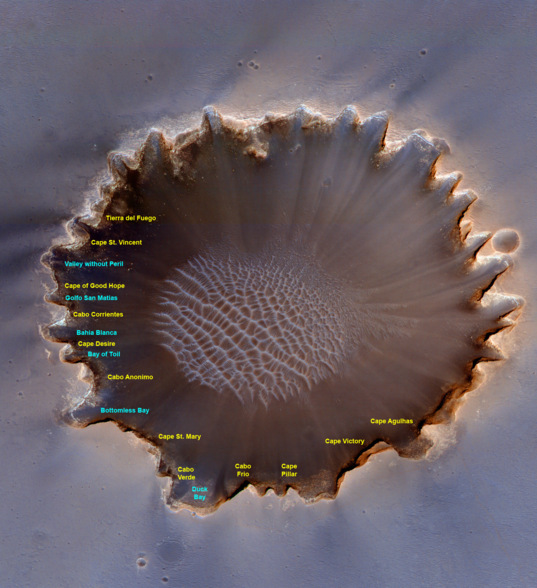 What's cool about this photo, apart from the oblique view that makes west-facing cliffs easier to see, is of course that you can see rover tracks. The tracks show up brighter and redder than the sand. And wherever Opportunity paused and turned, it made a little doughnut that punctuates the tracks with a little bright dot -- very cute, and almost identical to the appearance of Eduardo Tesheiner's route maps! Here's a comparison between the northern rim of the crater and Eduardo's map. I stretched the color in the base image to make it easier to pick out Opportunity's tracks. 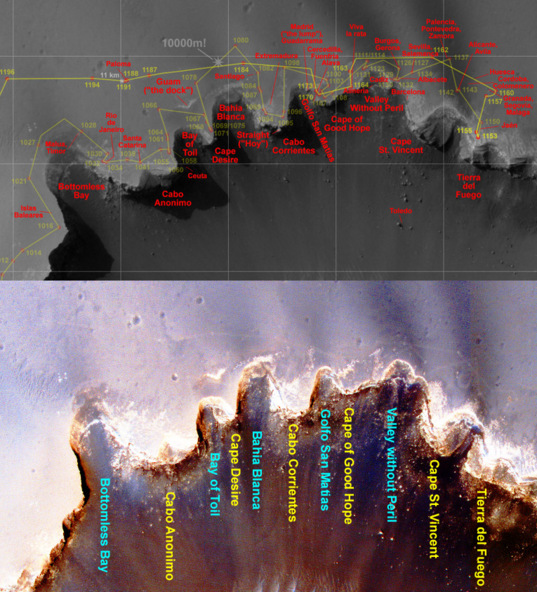 Comparison between route map and HiRISE image of Victoria

On July 18, 2009, Mars Reconnaissance Orbiter captured an oblique view on Victoria crater. This segment of the northern rim was explored by Opportunity from approximately sols 1,000 to 1,200; its tracks are still visible as brighter, redder lines on the ground.