The Saturn view I've been waiting for

Over the weekend, Cassini acquired a set of images that will (I am assuming) eventually be used to produce a glorious portrait of the ringed planet from a point of view that's never been seen before.

Cassini has already produced two significant, detailed mosaics of Saturn. The first was taken early in the mission from a fairly familiar perspective, showing most of the globe of Saturn as well as the rings from their sunlit side. Although it's from a higher phase angle (meaning that Saturn is less full) than Earth-based observers can achieve, this perspective seems moderately familiar. It achieves 38 kilometers per pixel, pretty astonishing given that Saturn's globe alone measures in at more than 120,000 kilometers across. Taking the image required 42 separate pointings of Cassini's Narrow-Angle Camera. 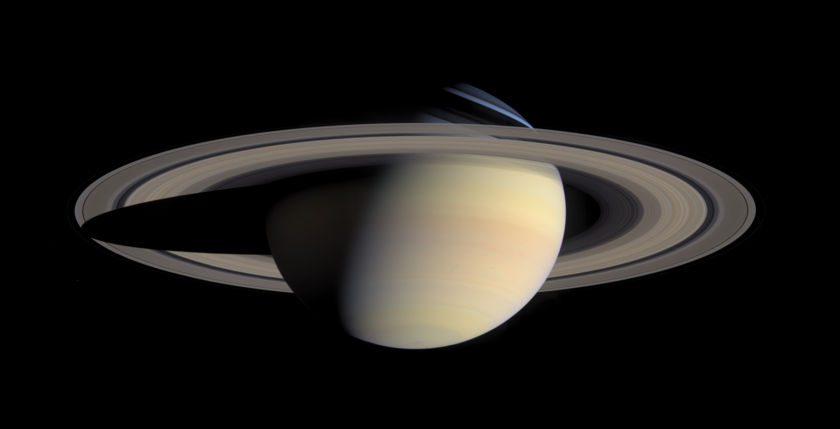 The most detailed view of Saturn yet

The next major portrait of Saturn was taken nearly two years later, on September 14, 2006. This is that amazing view of Saturn in eclipse -- we're looking almost directly toward the Sun, with the globe of Saturn occulting it. The fainter rings look really bright because small dust particles scatter sunlight forward to Cassini. This one has a lower resolution than the first -- 260 kilometers per pixel -- because, although it was taken from closer to the planet, it came from the Wide-Angle Camera, which has a tenth the resolving power of the Narrow-Angle Camera. It took 18 pointings to make this view.

Well, on Saturday, they took the photos for a third major portrait of Saturn. Instead of looking at Saturn from in front, like the first one, or behind, like the second one, we're looking at Saturn from above the planet. It'll be the first time ever that the A and B rings have been viewed, uninterrupted, in their entirety. I've been wanting to see them take this snapshot since I first understood that the tour would send Cassini flying above and below the planet. Here's a quick look at the 12 separate pointings that will compose the final mosaic: 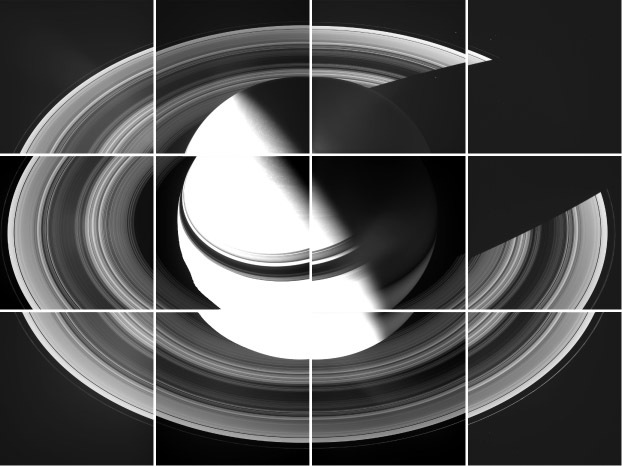 Pieces coming together for a view of Saturn from above

And here is my quick and (very) dirty attempt at assembling them. One could go crazy trying to line up all the little ringlets so that they match, never mind doing so with the separate red, green, and blue images that are necessary to make this appear in color; I will leave that to people with more patience and skill than I. Just regard this as a poor preview of a grand portrait of Saturn to come. 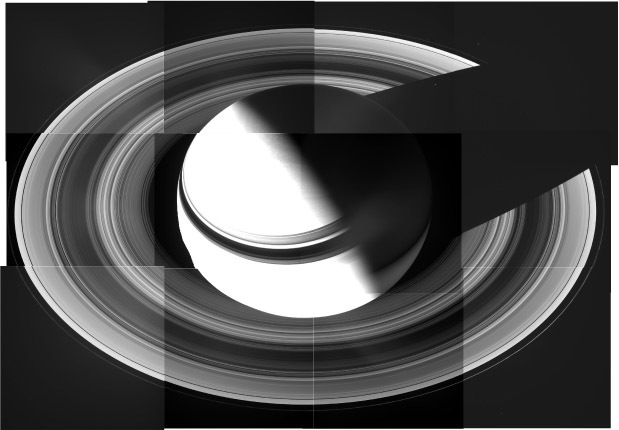 View of Saturn from above

When they do complete this mosaic, it will have a resolution of about 77 kilometers per pixel, half as fine as that of the first one I posted. It will also be different from the first mosaic in that we are looking at Saturn's ring system from the unlit side, so the most opaque B ring looks dark, while the more transparent A (outer), C, and D (inner) rings are brighter. Another interesting difference between this view and the first one: taken more than two years later, Saturn is considerably closer to its equinox, so Saturn's shadow stretches out beyond the rings, whereas it just barely kissed the edge of the rings in the first mosaic.

I can't wait to see this thing when it is finally put together!