This week's releases from the Mars Odyssey THEMIS team included a gorgeous one of the layered interior of Gale crater. First of all, here's a quick context image pulled from Google Mars, which is convenient because it can display the map using some of the same THEMIS imaging data: 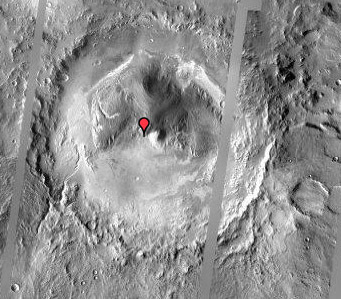 Gale crater on Mars is about 155 kilometers (96 miles) in diameter.

And here is the lovely new THEMIS image. A warning: if you click to enlarge, it's 2 Megabytes. I'll post some full-resolution detail views below for those of you who won't be able to download the whole thing. What we are looking at is a piece of the layered deposits from the middle of the crater. You can see where it fits into the context image above by matching that dark channel that arcs across the center left of the image. 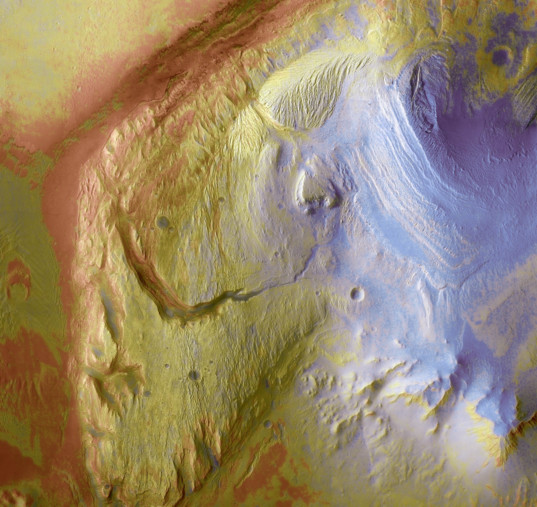 Gale crater, like Gusev crater, sits near the dichotomy boundary between Mars' southern highlands and northern lowlands. Its interior is filled with layer upon layer of rocks standing 5.5 kilometers (3.4 miles) higher than the northern crater floor, but it is unknown whether these are sediments came in with ancient floods, or lava flows, or windblown ash deposits. This image is composed of Mars Odyssey THEMIS images taken in both daytime and nighttime. The daytime images give the topographic detail; color from the nighttime images indicates the quality of the rock. Blue to white colors indicate fine-grained materials like sand and dust; they grade into redder colors where bedrock is exposed. Gale was one candidate landing site for the Mars Exploration Rover mission, and will be a candidate again for Mars Science Laboratory in 2009. The image covers an area 50.9 by 53.9 kilometers (31.6 by 33.5 miles) in extent, at a resolution of 18 meters per pixel. Source 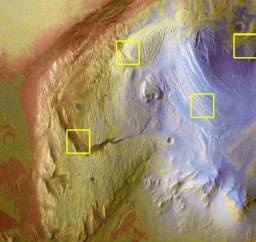 I thought I'd pull out a few interesting thumbnails at their full resolution of 18 meters per pixel and show them below. At right is a context image showing where the thumbnails came from. 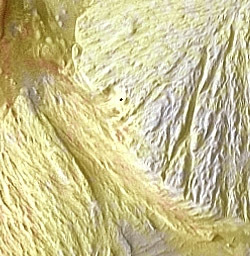 Detail from a THEMIS image of Gale crater

I think these THEMIS images are just beautiful -- I'd like to see an exhibition of them blown up and hanging on the walls of a gallery.

One reason that Gale is exciting is because it was one of the candidate landing sites for the Mars Exploration Rovers; we might have landed there instead of at Gusev. Here's a map: 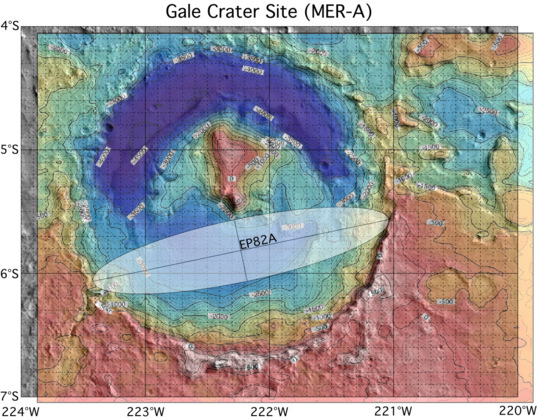 Gale crater was considered as a possible landing site for the Mars Exploration Rover mission, but it was eliminated because of unacceptable hazards.

But it was eliminated fairly late in the landing site selection process. I don't remember the exact reason that Gale didn't make the cut; it might be that they just couldn't squeeze the MER landing ellipse inside it (meaning that there was too much chance the rover could land in a spot dangerously close to steep crater walls), or there could have been questionable winds within it, or too much dust, or too many rocks. But it was an awfully close thing, and it looks like it would have been a great place to explore with a rover. According to the THEMIS team caption that accompanies this image release, Gale is now being considered again as a possible landing site for the 2009 Mars Science Laboratory.

I very much wanted to attend the first meeting of the Mars Science Laboratory landing site selection committee, which will take place late next week. Unfortunately, it overlaps with my 10th college reunion, which I'm going to instead. I was fortunate enough to attend the MER landing site selection meetings, and it was fascinating to watch the entire Mars community openly propose, debate, investigate, and eliminate candidate landing sites. I wrote an article about that in the May/June 2003 issue of The Planetary Report. If you're a member you can download the article in the For Members section of this site. Hopefully I'll get to attend future meetings.