A Protected Class of Programs at NASA?

Updated Dec 11: The House Science Committee approved this bill via a voice vote, with an amendment that specified the James Webb Space Telescope as one of the protected programs. The bill now moves to the full House for a vote, which has yet to be scheduled.

The House Science Committee is poised to add four new entries to the protected species list in the United States. These rare creatures go by the names of the Space Launch System, Multi-Purpose Crew Vehicle (Orion), the International Space Station, and the James Webb Space Telescope.

A new bill, to be considered by the committee on Wednesday, proposes to create a special type of program at NASA. For the lucky few, the bill (H.R.3625) does two things:

Termination reserves are monies set aside on the off chance that NASA decides to cancel a large program, allowing the contractors to close out operations and transition their workforce. Allowing SLS et. al. to dip into these reserves is questionable, since Congress essentially then guarantees that NASA will pay the actual termination costs if the program is cancelled out of future budgets. 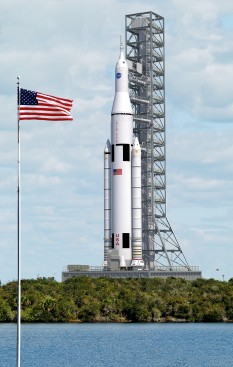 But more importantly, this bill moves a select few programs at NASA into a protected status, such that NASA itself cannot cancel them if they go severely over budget, behind schedule, or any other number of problems. It creates a two-tier structure of programs at the space agency and represents a departure from NASA control over their own projects.

Not only is this unfair, but it seems to set a bad precedent. If SLS/Orion/ISS/JWST are such important programs, why bother passing this bill? If they are truly worth the cost and will return great science and exploration dividends in the long run, why would NASA want to cancel these? The only reason to put these programs in protected status is if Congress is not confident that these will measure up in the long-run, something which doesn't reflect well on any of these programs. Why does the Science Committee seem to have a lack of confidence that NASA will continue to fund these? It doesn't make sense to me.

The politics of SLS, Orion, and the JWST are complex. There are many great reasons to invest in these projects. There are other strong reasons not to. Both the Congress and the White House have decided that these are all worthy projects. But enshrining them in a cloak of near-invincibility does no service to these programs. They, like every other project at NASA, should be judged on their merits and their cost vs. benefits through the normal political process, not added to some protected list to the exclusion of all other NASA activities.

The full House will still have to approve this legislation if it moves out of committee tomorrow (likely, since it has 15 co-sponsors). It's not clear how the Senate will react to this bill, but we will keep you updated with its progress.

Casey, Let me echo a question someone asked on your previous post: can you elaborate on the problem Planetary has with the White House / OMB? On this post, I can understand why -- not "agree with", but understand -- Congress wants to protect SLS, ISS, and JWST. But as you noted in the previous piece, it isn't just Congress. If anything Planetary Science has done *better* out of Congress than the White House. And it's not just that the Administration wants to cut NASA generally, my read is that they've disproportionately gone after planetary missions relative to the rest of the NASA budget -- despite them being scientifically justified, fairly popular, and supported on the Hill. Why? -- figure Congress supports human spaceflight even more, so if you want to cut *something* it has to be Planetary? -- want money to go to Earth observation instead (climate, etc)? -- afraid little missions now lead to pressure for expensive missions and then human missions later? -- reverse pysch -- cut the thing that's most popular so that Congress feels they have to put it back in? None of those "clever" reasons seems to work, except maybe prioritizing Earth science instead. Does OMB really just think planetary missions are a waste on their own merits?

Actually, if I read it correctly, the main goal the bill claims to represent is that it will force contractors not to withhold funds for a rainy day - early termination. It claims that $507M is presently being withheld by contractors. The real reason for H.R. 3625 is that it will make terminating SLS, Orion, ISS and JWST nearly impossible, as you are saying. This will wreck NASA for a decade, taking funds from making exploratory payloads and doing data reduction and research. Planetary will suffer like it is now and more so. Man-rating SLS placed NASA's more detailed and strict requirements upon development and likely doubled the cost. Had NASA assumed the approach of lifting humans separately and rendezvousing in LEO with habitats and Earth-escape motors, SLS might have been acceptable in the face of falling commercial launch costs. Now, cancellation SLS (maybe Orion too) and using Falcon Heavy is the best choice for the sake of all of NASA and the US taxpayer.

@aprof: There is a vibrant world of speculation as to why the OMB has targeted planetary science for cuts. My personal view is that it is a cold consequence of a shrinking budget: the Administration prioritizes Commercial Crew and Earth Science, Congress prioritizes the SLS/Orion and the JWST. There's not a lot of room left after that. I know of other people who are very familiar with the process who believe that the OMB is "punishing" NASA for cost overruns with Curiosity. Or that some people at the OMB just aren't moved by the concept of planetary exploration and therefore don't see why we should be investing in this. These may be true, but I there's no way to know for sure. The point where I fully realized the extent of Administration/OMB hostility/indifference to Planetary Science was the fiasco with the 2013 operating plan, which specifies how NASA will spend the money allocated to it by Congress. Congress had restored Planetary to $1.42B (from a White House request of $1.19). The sequester had just hit so NASA's CFO (with the OMB's blessing) proposed spending... $1.19B on Planetary Science, taking the entire amount of restored funding and spending it on other science programs (JWST and Earth Science). That's a bold move after Congress had just restored so much money. Ultimately we got some of that money back to Planetary last year, but it illustrated to me that the Administration puts almost no priority on this program, and was willing to completely defy the clear will of Congress on that matter. Make of that what you will.

@Casey: Thanks, that's helpful. I'd forgotten the 2013 story details, but yeah, confirms my sense that OMB is not just neglectful but hostile towards planetary science.

aprof's mystification at the logic of all this (widely shared); Telluric's "Man-rating ... doubled the cost" and "This will wreck NASA for a decade, taking funds from ..."; and Casey's "some people ... don't see why we should be investing in this" seem to me to be different bits of the jigsaw puzzle. Seen as a whole, is it impossible that there are passionate human-exploration advocates, some in high places, beavering away to purposely reduce Planetary funding wherever possible and maximise Human wherever possible, and possibly with the specific goal to "leave something worthwhile as a goal for astronauts to discover, otherwise our vastly expensive and unproductive programs face being made completely pointless, with the consequent end of our romantic dreams"? There are huge numbers of fanatical Star Trek dreamers out there, no matter the total practical implausibilities. Is it impossible that scientists (well, ok, robotic science) are in a fight to the death with the "Frontiersmen" over a dwindling pie?? Is it impossible that this is little more than the age-old contest between Heroes (Jocks) and Nerds? Is it possible that scientists need to urgently get MUCH more competitive about this???

The bill just passed the house committe. Basically, it says that if administration wants to cancel any of (SLS/Orion/JWST) it will have to pay termincation costs to its prime contractors with funds taken elsewhere from NASA budget - as if there is any place left. I.e. it shifts that responsibility from appropriations to administration - is that even legal ? Also, the above mentioned budget lines are the most expensive, their historical overruns are the biggest in absolute numbers - rewarding failure ?

As long as we don't hold politicians accountable at election time, this will continue to happen. Why should the admin care if they know they can get away with it? We had a chance to to send a message during the last election and did not. Planetary science is important to the public but the pork (SLS) because of politics.

On the subject of protecting SLS in particular from cancellation, here is a point I haven’t seen mentioned yet. Food for thought. In the last few decades and not counting SLS, NASA has begun four major launch vehicle development programs, each intended to replace the shuttle, the National Aerospace Plane “Orient Express” (1986), the X-33/34 Projects “Venture Star” (1996), the Space Launch Initiative (2000), and the Constellation Program (2005). All of these programs were cancelled for one reason or another (in 1992, 2001, 2002, and 2010 respectively), and none of them produced a launch vehicle. Total expenditures, in 2014 dollars, for these programs sum to an amount comparable to NASA’s annual budget (~$18B).