Below is an exoplanet hunting update from Yale’s Debra Fischer, including about the Planetary Society sponsored Alpha Centauri planet search, as well as her team’s efforts to remove “noise” from parent stars to help find exoplanets. Alpha Centauri, the closest system of stars to the Earth, consists of two Sun-like stars (Alpha Cen A and B), as well as the much smaller Proxima Centauri far from the other two. Here is Debra’s update:

In May, we observed Alpha Cen B almost every night. The new tip-tilt system brought more photons into the FINDS fiber - on single stars we measured an efficiency improvement of about 8%. Unfortunately, even with the improved guiding, the contamination from Alpha Cen A was significant on several of our nights when there was poor seeing. I've spoken with Xavier Dumusque on the Geneva team and they have similar results with the HARPS data. We are now revising our analysis code to see if we can model out this contamination. Fingers crossed, we'll have some results soon.

The search for true Earth analogs faces several challenges and one of them is identification and removal of signals on the surface of the star. Stars are boiling cauldrons of plasma threaded with magnetic fields. The photospheres of the stars have spots, flares, granulation, pulsations and other flows that are imprinted in the stellar spectrum and obscure tiny signals from small rocky worlds.

To understand these sources of stellar noise, we are using CHIRON on other stars, including Tau Ceti and Epsilon Eridani, two stars that Frank Drake observed with Project Ozma. Tau Ceti is a favorite of Doppler planet hunters because the stellar velocities are so constant... or are they? A recent analysis by Tuomi et al. suggests that low amplitude signals may be embedded in the data. We are now able to check that result.

Epsilon Eridani is a more challenging star with spots that mimic Doppler velocity signals. We are writing up our results for that star now - by luck, we caught the star during a stretch when it had large persistent spots; this data set is a training ground for my students who are writing computer algorithms to identify and de-correlate stellar noise from Doppler data.

Planetary Society members provided support to rent telescope observing nights for Debra Fischer and her group to continue to observe the Alpha Centauri system, now with an upgraded system. They also are employing a FINDS (Fiber Optic Next generation Doppler Search for) Exo-Earths system developed because of support provided by Planetary Society members. 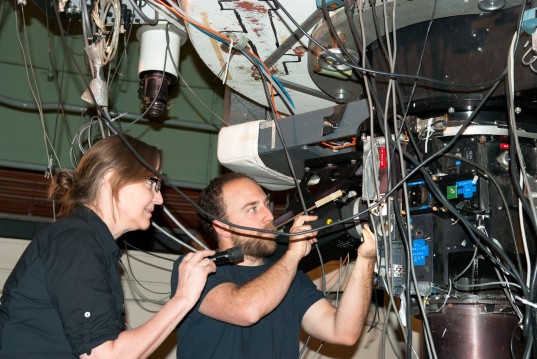 Want a primer on exoplanets and exoplanet hunting? You can watch my class below from my Spring 2013 Introduction to Planetary Science and Astronomy college course at California State University Dominguez Hills.

Donate to the FINDS Exo-Earths today!

Just donated to this wonderful project. How many months will be needed to confirm Alpha Centauri Bb?

Unclear exactly how long, though in checking with Debra Fischer, she is hopeful at having some result in the next few months.