A Major Political Victory for The Planetary Society

I have exciting news.

The Planetary Society just achieved a major victory in our efforts to ensure strong funding for NASA’s planetary exploration.

On Tuesday, the President signed a bill that funds the U.S. Government for the remainder of 2013. Tucked away in this bill is crucial language that restores $223 million to NASA’s Planetary Science Division. This is a major step in reversing the $309 million cut proposed to the program last year. It achieves nearly all of our policy goals for the fiscal year 2013.

Membership dues and donations gave us the resources necessary to organize a flood of over fifty-thousand messages to Congress, to fly key Society staff and me to Washington, D.C. for face-to-face visits, and to support staff time in research and outreach. We worked very hard to make this happen. Thank you to all of our forty-thousand members for your support.

Tucked away in this bill is crucial language that restores $223 million to NASA’s Planetary Science Division. This is a major step in reversing the $309 million cut proposed to the program last year. It achieves nearly all of our policy goals for the fiscal year 2013. 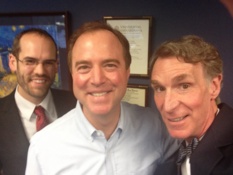 Planetary Society CEO Bill Nye and Advocacy strategist Casey Dreier meet with Congressman Adam Schiff to highlight the importance of Planetary Science funding at NASA. One of the many face-to-face meetings the Planetary Society held with lawmakers in 2013.

In the bill, there is money set aside to start planning a mission to Europa to explore its hidden ocean. NASA’s other small planetary exploration missions are getting a boost, allowing a new mission opportunity next year instead of two or three years from now. Additional research funding will support a community of world-class scientists and students around the country. There is also funding for a restart of Plutonium-238 fuel production, crucial for deep-space missions—an issue that has gone unresolved for almost three years. This bill is chock-full of great news.

The across-the-board cuts known as the sequester still apply, so the actual amount that NASA can spend exploring the planets will be slightly less, but we’re in a much stronger position than we were even a week ago.

Also, keep in mind this only applies for the fiscal year 2013, which ends in October. Next year’s budget proposal is due out on April 10th, and we will be watching to see if it reflects the commitment to Planetary Science so clearly supported by the people and the U.S. Congress. If it doesn’t, we will ask you to help restore funding again. We did it once. We can do it again.

There are worlds crying out for exploration and discovery. Yesterday, we took a step towards answering their call. The Planetary Society will not cease in our efforts to enable one of humanity’s greatest endeavors.

Learn how you can help Save Our Science and help ensure funding for NASA's planetary exploration program. Go to our political action page.