It's mid-October in southern Arizona. While the rest of the United States slips quietly into Fall, the sun here still rises far above the distant Rincon Mountains as we head east from Tucson. The dry, 100-degree air implores us to maintain a lazy pace as we drive along, lest we succumb to the unforgiving harshness of the Sonoran Desert.

And that's when we see it.

Rising high above the tan, clay landscape is a bulbous white airplane hull, dwarfing an oddball collection of other military and civilian planes basking in the hot sun. It is an ungainly beast, looking something like a blimp stacked on top of an old propeller plane, white with a baby blue stripe and the name "NASA" stamped on its tail fin in retro gold and navy blue.

We're at the Pima County Air and Space Museum, home to a diverse collection of retiree airplanes finishing out their golden years. You wouldn't know it from a distance, but the white whale-of-a-plane in question played a critical role in America's human spaceflight program, ferrying sections of the mighty Saturn moon rockets from California to Florida. Those involved in the plane's history say the plane and its siblings were critical to the success of the Apollo program, enabling America to fulfill president John F. Kennedy's goal to land humans on the moon before 1970. A small, black sign stuck in the sand next to the massive plane's nose wheels reads "AERO SPACELINES 377-G SUPER GUPPY. TRANSPORT SPACE VEHICLE COMPONENTS INC. SATURN V BOOSTERS." 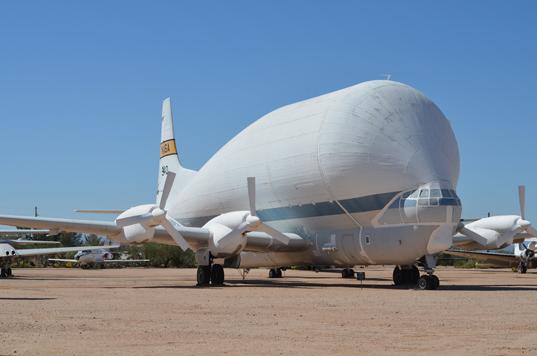 Legend has it that the idea of using a giant cargo airplane for rocket transport was born on a cocktail napkin, when two friends were talking shop about NASA's transportation woes. At the time, Saturn boosters for the Apollo space program were being constructed by the Douglas Aircraft Company in Sacramento, California, but they needed to find their way down to Florida's Cape Canaveral to be stacked, fueled and launched. Just how should NASA get these 40-by-18-foot sections of rocket hull across the states? Trailers and trains were too small. There were barges, but that required a 15-day trip around Mexico via the Panama Canal. There must be a better way, reasoned Air Force pilot John Conroy, to his airplane broker pal Lee Mansdorf.

Mandsdorf came up with a better way. He had recently acquired a handful of big Boeing 377 Stratocruisers that were being taken out of service and piled up at Van Nuys Airport, outside of Los Angeles. What if you could lengthen a Stratocruiser fuselage, and pile another one on top of the first? The idea took flight, literally -- two fuselages were braced together with two-by-four lumber and taken for a test flight by Conroy. The flight was a success, so the partners, now operating as the company Aero Spacelines, officially offered the services of their giant cargo plane to NASA. After receiving permission from the FAA to fly to Houston (under the agreement that he would avoid populated areas), Conroy made the trip to show off his prototype to the legendary Wernher von Braun, the father of America's Saturn rocket system. According to legend, one NASA official commented that the plane looked like a "pregnant guppy," and the name stuck. (Guppies are common household fish, whose females produce copious live offspring.) Von Braun was intrigued, and signed up NASA as a customer.

Back in California, the Pregnant Guppy's lumber bracing was removed, its finishing touches were applied, and it was deemed ready for its first 141,000-pound (6400-kilogram), fully-loaded test takeoff from Mojave Airport.

The flight was nearly its last. The Guppy charged down the runway, sucking air and frantically burning jet fuel, managing to stagger off the tarmac into the air. But the big fish couldn't seem to climb fast enough for the hills rising in its path, and one of the overstressed engines overheated in the process. As the nearby town of Boron loomed dead ahead, the Guppy finally began to climb; the flight crew insists it was only due to maxing the throttle at full power, which shed some fuel weight during the near-miss. After the incident, everyone agreed that the Guppy needed to go on a diet, and its maximum weight was lowered by 8,000 pounds (3600 kilograms).

In 1963, the Pregnant Guppy officially began its work for NASA. It wasn't long before demand for its services exceeded supply, so Aero Spacelines began construction on four new planes to take on the grueling schedule required during the height of the space race. The original moniker for the new model was "Very Pregnant Guppy," but the final naming decision dropped the birthing analogy in favor of the simple term "Super."

The first production Super Guppy, which is the very same plane that now basks in the Arizona sun, had a scale-tipping maximum takeoff weight of 175,000 pounds (79,400 kilograms). It loads from the front -- the great fish hinges open to reveal a cavernous usable storage space of 39,000 cubic feet (1100 cubic meters). The two aluminum hinges required to pull off this trick weigh 600 pounds (270 kilograms) each. After the Apollo program cooled off, Aero Spacelines had to find commercial work for the entire Guppy family, so they started leasing the planes to aviation companies for shipping duty. However, in 1979 the first Super Guppy came home to NASA for good, when it was sold to the space agency outright to ferry space shuttle components. In 1991, it was retired from service, having provided 26 years of transport duty.

NASA still owns a Super Guppy: the 377-SGT, last of the fleet. It ferried components for the International Space Station to Florida for space shuttle launches, and has been active as recently as May 2011, spotted at Rick Husband Amarillo International Airport in Texas. NASA leases the Guppy for aviation transport to offset the cost of maintaining it.

In September 2011, NASA revealed the design for the Space Launch System, the next-generation rocket to ferry humans beyond Earth orbit. Will the 377-SGT be called upon to ship components to Florida? It's likely; the logistics of moving rockets across the country remain a daunting challenge.

Back in Arizona, I reach up and grab one of the Super Guppy's propellers, giving it a tug. It gives a few inches, and I get a stern look from my wife. The Pratt and Whitney T-34 engines seem ready to roar to life at any moment, sending the great plane skyward across the desert towards Florida. The windows of the cockpit appear coated with plaster and paint, long sealed to keep out critters that would make the Guppy their home. Inside, parts of the human race's quest to walk on another planetary body once took their first baby steps before ultimately embarking on their final journey.