From the category, "Stuck in My Craw":

In the last couple of weeks, media outlets around the world have been reporting that NASA recently convened a private meeting at JPL to identify the worst movies ever made, scientifically speaking. The film "2012" was declared "the most absurd science-fiction film."

It seemed like a good story. The problem was that it wasn't true.

"This was a case of spectacularly bad reporting," said Don Yeomans, the senior research scientist at JPL who was "quoted" in the story (and misidentified as "head of NASA's Near-Earth Asteroid Rendezvous mission," a project not managed at Don's home base of JPL, but at the Applied Physics Lab [APL] of Johns Hopkins University).

It got worse. Around the world, reporters uncovered the original reporter's story in The Times (London) and, instead of researching the facts themselves or calling Don Yeomans to get their own quotes, they reported on another reporter's work. The facts rapidly distorted out of all recognition, with some outlets announcing that NASA had compiled a Top 10 List of all-time worst films. Respected news sources like the Boston Globe, NPR, and the Guardian carried the story.

The story seems to have been triggered by a meeting called "NASA101" that was held at JPL. There, NASA scientists, media figures (such as Bill Nye the Science Guy, also known to Planetary Society Members as the Executive Director), and people working in films and television got together to explore ideas that could make good entertainment products.

The meeting's organizers hoped to showcase NASA as a resource for the best available science, as well as a source of wild and strange ideas that just happen to be based in science. As the great British geneticist J.B.S. Haldane once said, "The Universe is not only queerer than we suppose, but queerer than we can suppose."

So NASA asked some of its leading scientists to present some of their most provocative discoveries to an audience from the entertainment industry. They put on a good show. People from diverse backgrounds connected. Business cards were exchanged. Ideas were fostered. Potential working relationships were being created.

Then, the erroneous story broke. It put NASA in the position of seeming to ridicule the very community it was trying to engage.

"We would never be so foolish as to compile a list of the worst science-based films." Don Yeomans explained. "I did point out to the journalist that we had received a number of inquiries from concerned citizens about the events that are supposed to take place in 2012 (Nibiru, solar max, some planetary alignments, end of Mayan calendar etc.) and that either there is no evidence (Nibiru, planetary alignments, end of Mayan calendar) or such phenomena occur fairly routinely (solar max)."

Don was a presenter at NASA101. The topic of "2012" did come up and its disconnection from scientific reality was discussed. But there was no mention of crowning an all-time worst film. Don and the other scientists acknowledged that the demands of filmmaking sometimes require that facts be bent to the demands of story, but they encouraged the Hollywood types to take their ideas and run with them.

(How do I know what was said? I was there. In the room. With my ears open. Listening.)

I understand that a good story demands conflict and, in the cause of storytelling, the media have been known to create conflict out of empty air. That seems to be what happened here, with a reporter manufacturing a scenario where a government agency, NASA, supposedly passed judgment on a work far out of its official purview.

And judging by the way this false story spread around the world, I guess you could say the reporter told a good story. With the small problem that it wasn't true.

Such failures in truth-telling are pernicious and, now that the Internet can spread falsehoods as fast as electrons can travel through wires and electromagnetic signals can travel through the air, they are nearly impossible to stop. This particular falsehood spread like an Internet game of "Telephone," where each time another reporter repeated the misconception, it morphed into something even farther from reality and more damaging. 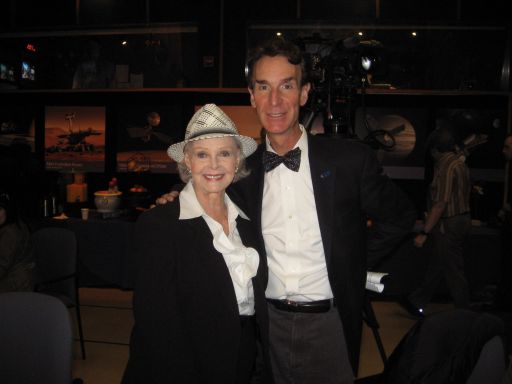 Bill Nye, Planetary Society Executive Director, was charmed by actress June Lockhart, known to those of a certain age either as the mom from "Lost in Space" or the mom from "Lassie." Ms.Lockhart is an energetic supporter of space exploration and made lively and well-informed contributions to the day's discussions of science and entertainment. 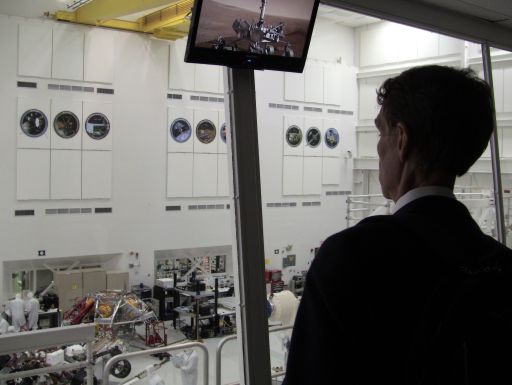 That's Bill Nye overlooking the Curiosity rover, also known as the Mars Science Laboratory, on the floor of the clean room at JPL. The rover lies flipped on its back in the bottom left corner of this image. The skycrane assembly that will lower it to Mars' surface is
the structure just above it. Those attending NASA101 were treated with a visit to Curiosity as it is be readied for its mission.