It really looks like Hayabusa is going to make it home. Hayabusa's sample return capsule will be returning to Earth on June 13, 2010, landing in the Woomera Prohibited Area, Australia at about 14:00 UTC. These basic facts have been a matter of public knowledge for a while, but became official today with an announcement from the Australian Ministry of Defence. The release quotes Australian Defence Minister Senator John Faulkner as saying: "Australian authorities will assist JAXA in ensuring the recovery of the spacecraft on its return and are working closely with their Japanese counterparts on the proposed path and landing of Hayabusa."

A little background: Hayabusa is Japan's ion-powered asteroid sample return mission, also known as MUSES-C. It launched on May 9, 2003 and rendezvoused with asteroid Itokawa on September 12, 2005. It made two attempts to touch down and grab a sample from the asteroid's surface in November of the same year, and departed Itokawa in December 2005. Since then, it has been en route back to Earth, and it is expected to return its sample capsule to the Woomera desert on June 13. (The mission team named one of the flat areas on Itokawa "Woomera" in honor of this connection.) 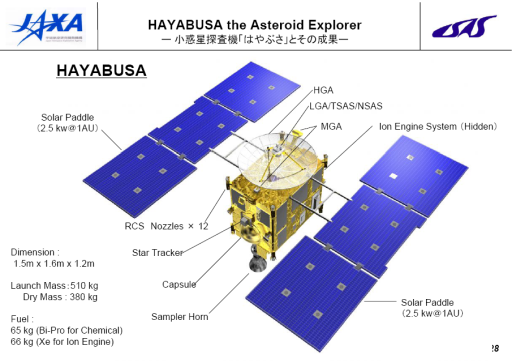 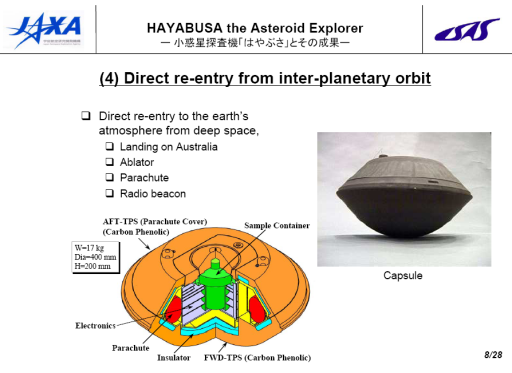 Hayabusa's sample return capsule is only 400 millimeters (about 16 inches) across.

That dry recitation of facts fails to capture the drama of this mission. An audacious mission, with a tiny spacecraft, Hayabusa has time after time encountered what should have been mission-ending disasters, yet the team has always managed to maintain control of their spacecraft and have beaten the odds to bring him back home. (In the Japanese language, unlike in Western languages, ships and spacecraft are referred to as "he" -- that's why the Google translations of many Hayabusa educational websites speak of "Mr. Hayabusa.")

Hayabusa has survived solar flare damage to his solar panels. He's survived damage to his chemical thruster system that resulted in the loss of all of his hydrazine maneuvering fuel. He fell out of contact with Earth for so long that his return has been delayed for three years from the original plan. All but one reaction wheel have failed. They've had to employ solar sailing techniques to maintain three-axis stabilization. When all but one of the four ion engines failed, they somehow managed to rig parts of two of the failed engines to work together to act as one.

Now, Hayabusa is almost home. He's on course to return to Earth; all that remains is to guide the spacecraft to the correct entry point and release the sample return capsule -- then find it once it lands in the desert. Based on how things have gone with the mission in the past, I am viewing the coming two months with some trepidation -- what else can go wrong? -- but I am hoping against hope that not only will they return the capsule, they'll find something inside it. (It's possible that the sample grabbing mechanism did not function correctly. We won't know until we can crack the lid open.)

There is a presentation online that contains a few more details about what we can expect to happen over the coming two months. It was presented by Yukio Shimizu, Manager of ISAS' Safety and Quality Assurance Office, to the 22nd Microelectronics Workshop (or MEWS) on October 15, 2009. The first slide shows the plans for the upcoming Trajectory Correction Maneuvers (or TCMs, to acronym-happy engineers). The first three planned TCMs, to take place from March through May, will continue to aim the spacecraft safely off the edge of Earth. It's only very close to the end of the mission, in June, when the final two TCMs will aim the spacecraft toward Australia. 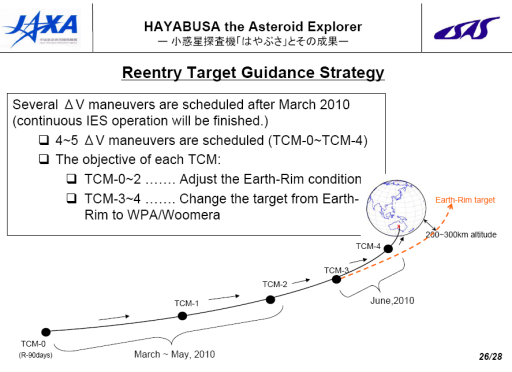 This slide, from a presentation given by Yukio Shimizu to the 22nd Microelectronics Workshop (MEWS) on October 15, 2009, explains the plans for Hayabusa's trajectory correction maneuvers (TCMs) for its June 2010 sample return. TCMs 0 through 2 target Earth's limb so that, in the event of the problem, there is no danger to Earth from the spacecraft. Only the last two TCMs shift the spacecraft's return point to the Woomera Prohibited Area in south-central Australia.

Some of you are probably wondering how Hayabusa can do trajectory correction at all. Like all ion-powered craft launched to space so far, Hayabusa's ion engines have very high efficiency but very low thrusting power, so the spacecraft was built with an additional old-fashioned chemical propulsion system for performing maneuvers. But, as I said above, Hayabusa's chemical propulsion system is kaput; it will have to do all trajectory correction by ion power. Hayabusa's success in targeting its return to Earth proves its ion thrusters have the necessary power, but the TCMs will take some time to accomplish.

The second slide from Shimizu's presentation shows the plans for landing the sample return capsule in the Woomera Prohibited Area (WPA) in southern Australia, an area administered by Australia's Department of Defence. You might think -- "oh, that's like the Nevada Test Range," but I Googled them both and the Nevada Test Range is only three percent the size of the WPA. Australia and the United States are comparable in terms of area but the United States has nothing like the vast, open, nearly unpopulated areas of Australia.

The capsule will be coming in on June 13 on a trajectory a bit north of west, having the same sense of motion as Earth's rotation; four tracking stations will look for the punch-bowl-sized capsule as it falls to the ground. 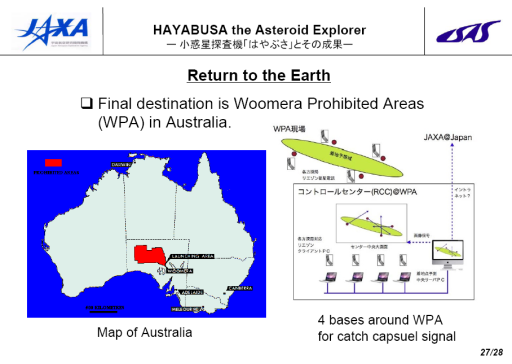 This slide, from a presentation given by Yukio Shimizu to the 22nd Microelectronics Workshop (MEWS) on October 15, 2009, shows the landing ellipse for the Hayabusa sample return capsule, within the Woomera Prohibited Area in south-central Australia. Four optical stations will be positioned around the ellipse to spot the incoming fireball.

Best wishes to all involved that Hayabusa can accomplish this last phase of its dramatic mission with no unnecessary added drama! I will be watching the mission very closely, and will post updates as I get them.